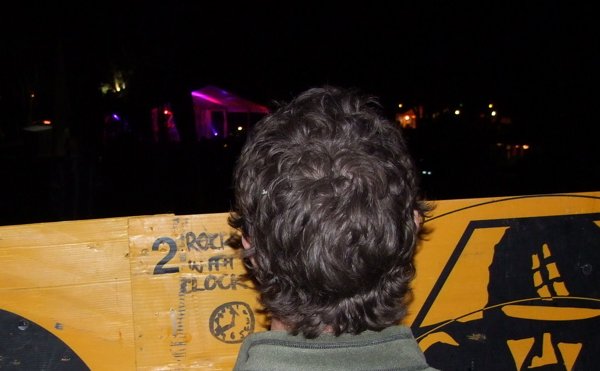 Corinbank have announced the Re-Bank tickets are going on sale 9am next Thursday:

Are you ready? Tickets to Corinbank 2012 [Take 2] will be on sale from 9am next Thursday 13 September from www.corinbank.com. Three-day tickets ($149 + booking fee) include free camping. Tickets for kids under 16 are still only $5 (+ booking fee).

As we’ve said all along, tickets purchased to the March festival are valid but please make sure you bring them to the gate, as we are unable to reissue tickets.

The music, performance and visual art programs will be announced later this month. We’ll keep you in the loop so you can count it down with us!

[Photo from Corinbank 2009. It’s a festival where you don’t miss the music even when you go for a wee]

JB, are you able to say whether there will also be banquet and carpark tickets on sale (I missed out on both last time around)?

What is the lineup?

Corinbank veterans know to trust in the genius of Marky B and don’t sweat the lineup.

TBA but with some similarities to what was announced for the washed out festival is my mail.

Linda Gee - 32 minutes ago
Jeez, that's not good. 😥 View
Meg Redmond - 39 minutes ago
I’m not sure it is Linda Gee he is struggling to get one at 4000.00 showed available to me yesterday he tried to book it an... View
Linda Gee - 2 hours ago
Good news for you Alex Suter Redmond . View
Opinion 21

Buck Johno - 7 hours ago
From what I remember of night rider busses it was only over summer. View
PE TE - 15 hours ago
Sean Bishop but the Uber rapes have increased View
Property 29

Capital Retro - 11 hours ago
Violent home invasions targeting keys for owners' luxury cars are now out of control in Canberra. Very few details are subjec... View
Daniel Lesky - 13 hours ago
Jason Malcolm could be worse not like she needs to go to charnwood View
Lisa LaMaitre - 16 hours ago
No-one pays attention to crime in Canberra until it impacts them! We closed a Gungahlin based business over 10 years ago afte... View
Lifestyle 1

George Frilingos - 13 hours ago
Angelina Mamatas are you still interested? Huge investment. We would need a great business plan, and with people not able to... View
Tiana Jai - 13 hours ago
Dave William got a spare 6mil? View
Kara Youngentob - 15 hours ago
Alison Procter, it depends on how many people interested. Ideally, somewhere in the 750k range. It’s 31 acres so it would b... View
Food & Wine 25