UPDATED: Hunt’s COVID-19 warning after diplomat drove back to Canberra from Sydney airport 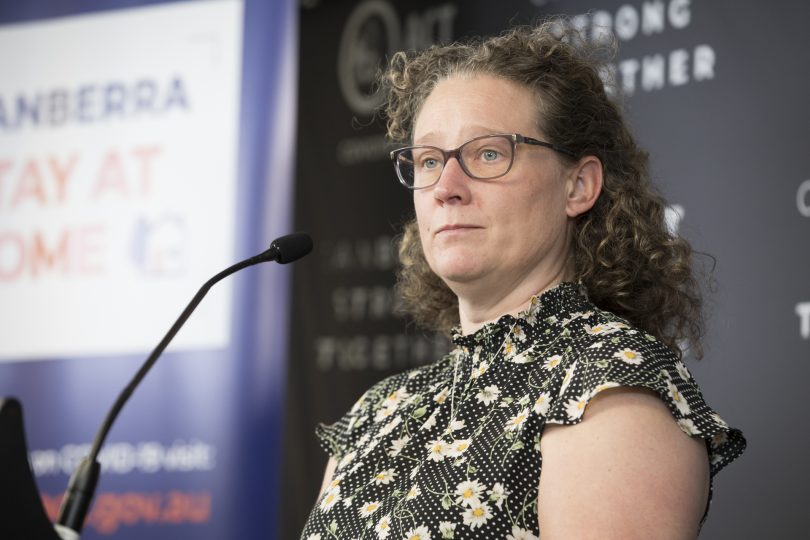 Chief Health Officer Dr Kerryn Coleman is confident there is no risk to the broader ACT community. Photo: Michelle Kroll.

Referring to the 40-year-old diplomat who tested positive for COVID-19 in Canberra on Saturday after recently returning from overseas and driving straight to his home in the ACT, Mr Hunt said the rules applied to everyone.

”If they have feet on Australian soil they will be expected to adopt Australian rules,” he said.

If there were breaches, Mr Hunt said Australian authorities would take it up with the diplomat’s home country ”very strongly”.

Asked why the diplomat did not go into immediate quarantine in a Sydney hotel, ACT Chief Health Officer Dr Kerryn Coleman said there were exceptions for diplomats although she did not know whether he had an exemption from isolating after arriving.

”He drove back to Canberra in a private car and no one was exposed during that trip,” she said.

She would not say whether he was Australian or not, or which country he had recently been in, other than to say it was somewhere with current cases of COVID-19.

The man was now in quarantine at home, along with his family who had also been exposed to the virus.

”The family will need to stay in quarantine until we allow them to leave,” Dr Coleman said.

She was confident that there has been no risk to the broader ACT community.

He said the diplomat did follow the very clear health advice around self-isolation and quarantining and that made this outcome less worse than it could have been, ”but it does serve as a reminder that it only takes one person to start a new chain of infection”.

“In relation to DFAT, well, they clearly have to observe the international protocols around diplomats. The same rules apply to diplomats in different countries around the world.”

The case is the ACT’s first since the end of May and is the only known active case in the ACT – all other COVID-19 patients have recovered and there are no COVID-19 patients in Canberra hospitals. It brings the total number of COVID-19 cases in the ACT to 108. Three deaths from COVID-19 have been recorded. A total of 20,379 negative tests have been carried out in the ACT.

Dr Coleman added that the case is also a demonstration of how important it is for the ACT to maintain a high level of testing in the community as restrictions begin to ease and people begin moving more freely.

She expected more case to be diagnosed as restrictions were lifted and the movement of people increased.

”The ACT will continue to have a strong and rapid public health response to any new cases,” Dr Coleman said.

A planeload of Australians arrived in Canberra from Nepal today as part of the ongoing repatriation of citizens from around the world. They will need to go into immediate quarantine for 14 days.

2 Responses to UPDATED: Hunt’s COVID-19 warning after diplomat drove back to Canberra from Sydney airport
Filter
Showing only Website comments

Our laws regarding this virus seem to be unraveling.
This person can waltz off a o’seas plane, no tests? ( NSW fault ?, Feds ? ), and then wander around the ACT community till he’s apparently feeling crook, and is tested for the bug, and has it. How wonderful.

No footy because it would mean a crowd, but crowd protests are OK.

No crowds in my cafe, but crowds in stores ( stores were packed over Easter and Anzac, and now 9 weeks later rise in people with bugs from those crowds, nil )

Clubs not open cause it would not be profitable to trade as crowds are not allowed. But you can drive to Queanbeyan and go to the Leagues club , no worries.

Just how long do we wait for this ‘second wave’ to appear?

If the diplomat has tested positive they can’t claim there is no risk: his kids have been going to school. Did he call in to any supermarket on his way home ? Did he pick up petrol? Since he has already thumbed his nose at our rules, do we know for sure that he is in fact self-quarantined – are there police posted and keeping an eye on his house? If not why not?

Lihuan Panda - 3 hours ago
from the conversations and interviews, I think some players chose not to turn up for the briefings and missed out on informat... View
Hugo Walker - 6 hours ago
Penny Ford But isn’t he rich, famous and self-entitled? Surely that should persuade the authorities to cave in to his tantr... View
Pia Kivela - 9 hours ago
Personally we are in a pandemic so we should not be having this tournament View
Opinion 20

PE TE - 5 hours ago
Sean Bishop but the Uber rapes have increased View
Kim Rumble-Kozjak - 16 hours ago
Jacqleequack it was all good fun until the two hour wait in the cab line, in stilettos, without a jacket in -2 🥶❄️ View
News 5

Colleen Alchin - 15 hours ago
This situation is appalling! Forty minutes from the national capital and you need to buy bottled water to drink and wash clot... View
Tegan Gilchrist - 22 hours ago
Amy LD and the clothes!!! Swapped out all out white sheets for greys. Blazer ruined. I now fill up bottles of water from my p... View
Community 1

A little under a year ago, the ACT Government announced that e-scooters can be legally driven on shared paths and...
News 30

Last COVID-19 update a sign of hope for the ACT