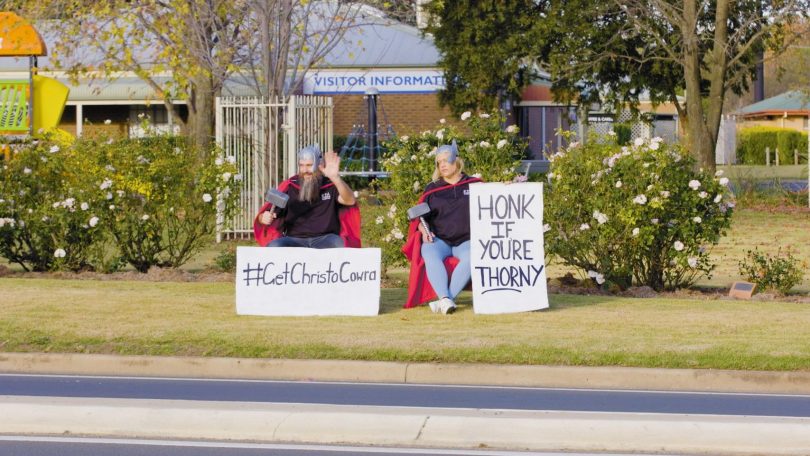 Until recently, Cowra’s claim to fame was its fat lambs, stunning canola crops, Japanese gardens and historic wartime breakout, but now the NSW country town has managed to go viral with a clever advertising campaign based around Hollywood heavyweight Chris Hemsworth.

Although a popular daytrip for Canberrans, Cowra has long flown under the radar as a tourist destination, however the #GetChrisToCowra campaign is getting up a head of steam with a tongue-in-check pledge to build a ‘Big Chris’ in regional NSW if the Thor star agrees to visit.

And now it seems they may have to come up with the goods, after the heart-throb used social media to accept the town’s invitation and promised to visit the town in 2022.

The town’s tourism manager, Glenn Daley, came up with the idea of targeting Chris Hemsworth when he saw he had become the ambassador of Lord Howe Island.

“I jumped on his Instagram page and saw how many hits he was getting on his photos and thought, ‘Well maybe he needs to come and see regional NSW,” he said.

What developed was a comprehensive campaign, a dedicated website and a quirky video that has taken on a life of its own. Packed with Aussie humour, the three-minute advertisement is proving an online hit.

The campaign also vows to build a statue of Chris Hemsworth if he agrees to visit. It would be called the ‘Big Chris’, standing 40 metres tall and 10 metres wide, and have “a beard like spun canola” which “could make him really famous”.

“That’s just a bit of fun, but I think it’s a great concept,” said Mr Daley.

“I love the idea of having a Big Chris. We wanted to do something different to showcase Cowra to the rest of Australia. Chris is such a great Aussie bloke and we wanted to get his attention with all the fantastic things the region has to offer.

“It’s been a rough couple of years – drought, COVID-19, mouse plague and whatever else – so I think this is a feel-good message to put out there that we are well on the road to recovery and there’s a lot to see and do out here, not just in Cowra but right around the Central West.

“It’s been a real community project.”

Cowra Tourism set up a #GetChrisToCowra petition to gather as many signatures as possible to encourage the actor to take up the offer – and it seems to have paid off.

“It’s a very clever campaign and one that resonates within Cowra and across the broader landscape,” said Cowra Council Mayor Bill West.

“We’ve had a great response from our community, but I think regionally we’ve had good support, too.

“We’re certainly sending the hands of welcome out to Chris, but also to everybody else who might like to come back as the COVID-19 pandemic starts to ease and the roadmap starts to provide opportunities for people to travel.

“There are opportunities for places such as Cowra for people to come and have a real good look at what we have, and what makes it tick. As well as the region around us.”

Jade Sturgeon just waiting for when he gets here 🤪

Samantha has this for something to do with you leaving?? 😂😂

Michelle Buckley do anything to get me to stay 😂😂

Made me want to visit 😁

That video is superb 👍🏽

Are these two ‘paid actors’?
If not, they should be! Brilliant 😂👏

Jen O’Shea watch the video in this

The wife looks super happy to be there

Pat Smith he always has loved the tale of the bushranger

Emma Boyle of course!!
I set the trends, ya know.

He can stay at the Cowra-van Park!

Great add and he said he’s coming to visit so hopefully it works out for them.

Great ad and now I want to go to Cowra!

Amanda this is what we need to do

Gracey Bryant tell your family to calm down

But Thor’s Hammer could perhaps be a lure? 🙄

Penny Hemsworth i do have family there 🤔 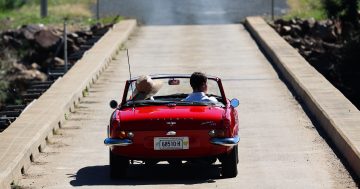