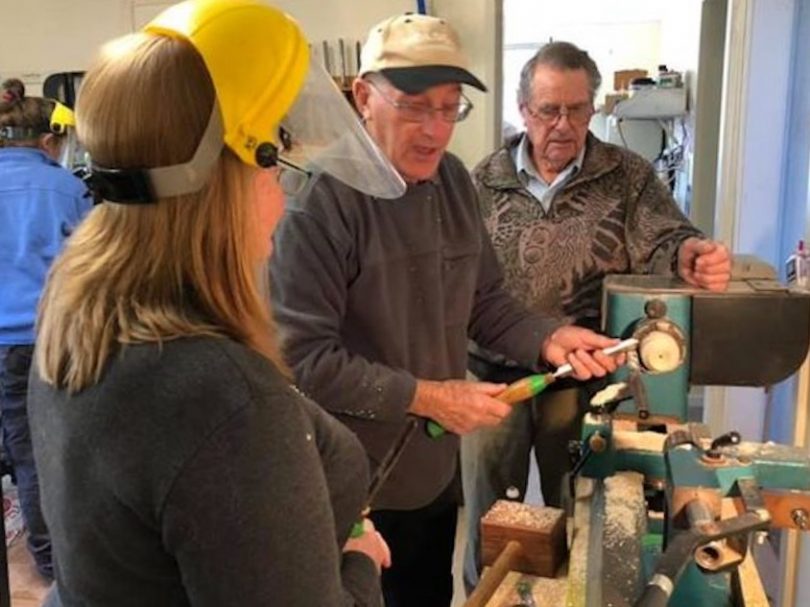 It’s not just the smell of sawdust and freshly chiseled wood shavings that stir the passion within Goulburn Region Woodworkers.

As seductive as working with the grain of timber becomes, and the reassurance that springs from a precision dovetail joint, what most satisfies the Goulburn Woodies is their craft’s connection with other likeminded souls.

These enterprising people are keen to revive their club’s momentum and regain that connection. Curbed by the COVID-19 pandemic, the club’s members long for company and fresh faces.

President Steve Orford has never forgotten advice from club life member Jack Treweek: keep the group together rather than spreading events across the week. The more members who are together on the one night, the more friendships that are formed.

Before COVID-19 struck, their 40-plus members were meeting regularly at their home rented from Goulburn Mulwaree Council, a clubhouse on Wheeo Road near the water filtration plant. Winning a grant in 2017 and matching it with savings, they expanded into a new shed.

Their clubhouse has a library, kitchen, two lathe rooms and a friendly fireplace in a room out the back where everyone gathers for a yarn.

Many of their noisy machines are in the shed.

“We used to have a huge Christmas party, and invite guests such as [widely acclaimed Goulburn woodturner] Andrew Gittoes,” says Steve.

“The mayor would come, we would have a presentation for best up-and-coming woodworker, bring all our wares in and people would judge them.”

They club also travelled to Bungendore Wood Works Gallery, and wood shows near and far. 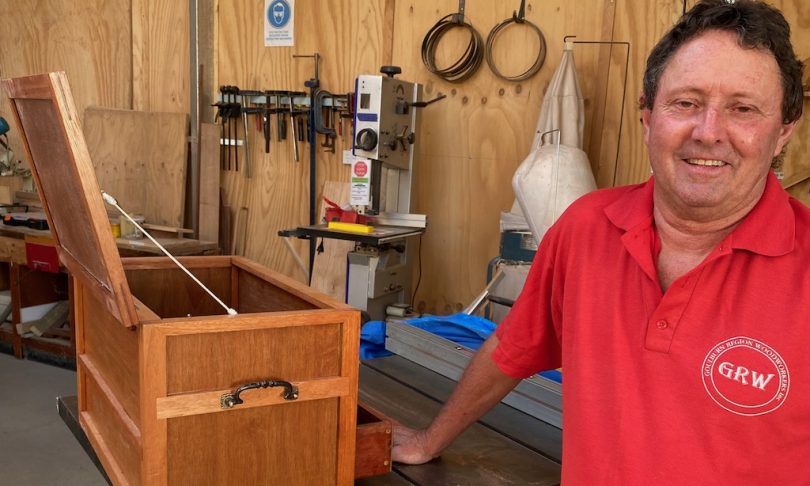 The Goulburn Woodies take in donated timber and re-sell pieces, donate woodwork to charities, and upgrade machines such as lathes. After more than two decades of thrift they have the whole ‘toyshop’ of power tools from table saws and lathes, to joiners and planers for members.

They still have slabs of English elm from a centuries old tree that toppled over in Belmore Park during a wind storm in 2016.

“We got a fair bit of timber out of that, which we cut up into slabs for small features, boxes,” says Steve.

“If people want to, they can buy a slab.”

“A fruit tree smashed a man’s fence and he donated it,” says Steve. “It will be cut into timber. Fruit trees can turn out good timber.”

Steve qualified as a carpenter at Goulburn TAFE, and worked for years at the Wool Scour, and then Mitre 10 in the timber yard, where he still works today.

He has never looked back since joining the Woodies.

“It’s been a highlight of my life,” says Steve. “I was at a stage thinking, ‘What am I doing?’

“My sister said, ‘There’s a woodwork club, I’ll put you in as a member for your birthday present.’”

“I love the club – it fills a void for so many people,” he says.

In the formative years, they exhibited works from numerous clubs, which took an enormous amount of effort but ignited Goulburn men and women’s imagination on what could be achieved working with wood.

Rose Vavasour, who died in 2020, had been the club’s tireless secretary when Jack was president.

“She joined as a young lady not knowing one end of a chisel from the other and left us an accomplished wood worker,” he says.

Jack is forever grateful to Kevin Dwyer, who guided him while crafting two outstanding coffee tables, then urged him to take one to a festival in Tumut, where Sydney and Melbourne judges awarded it a top prize.

Of all the machines available, the scroll saw is always in demand for making little boxes, and key rings featuring kookaburras and platypus, which some of the hobbyists sell at markets.

While members go for the efficiency of machinery, Steve reminds newcomers to take their time.

“I like to teach them how to plane properly,” he says.

“Just seeing something to make yourself, hand planing and chiseling it makes for a bit more satisfaction, I think.”