Danes give Canberrans freedom to Cycle Without Age 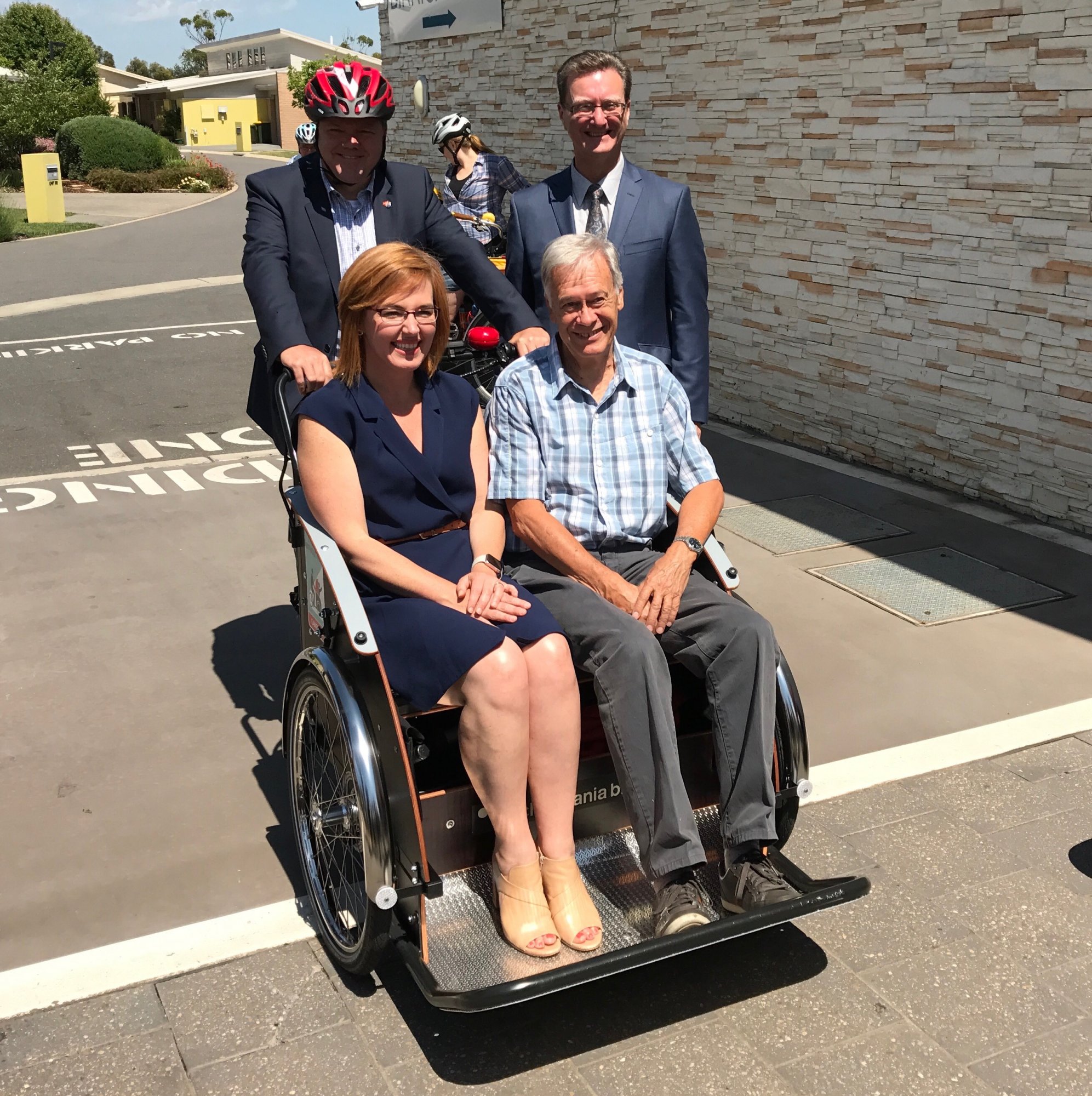 Canberra has become the first city in Australia to introduce a Danish program that aims to allow elderly and less-able people to enjoy the freedom of cycling.

Cycling Without Age was launched in Belconnen yesterday by Danish Ambassador His Excellency Mr Tom Nørring.

“Canberra is one of the places on the planet where you can breathe more freely, and Cycling Without Age is just that. It’s about caring, it’s about creating a community feeling,” said Mr Nørring. He also espoused the benefits of cycling for the environment and health, commending it to the politicians involved.

The Danish Embassy has worked with the ACT Government, aged care provider IRT, and Pedal Power ACT to bring two ‘trishaw’ bikes (pictured above) to Canberra in order to pioneer the program in Australia. The new bikes allow less-abled people to be taken out riding by a pilot who rides behind them.

Residents of the IRT Kangara Waters Facility in Belconnen were keen to try out the trishaws, with many expressing fond memories of cycling. “I’d like to go for a ride down to the foreshore to see the ducks,” said one resident, adding that she is looking forward to the freedom Cycling Without Age will offer.

Minister Fitzharris suggested that corflutes may be the key to getting more people on bikes, saying that “At the next election we should start by banning them from cycle paths, as an incentive for people to be cycling rather than driving.”

Pedal Power ACT will recruit and train volunteers to pilot the trishaws, with assistance from students and staff of the University of Canberra’s Faculty of Health, who are strong supporters of the program.

Pedal Power ACT Vice President Jeff Ibbotson said the lobby group was proud to be involved in the initiative.

“Keeping all Canberrans moving and on their bikes is our goal, and we are pleased that Cycling Without Age will allow more people to ride more often,” he said.

The program’s launch in Canberra was made possible thanks to a $20,000 Community Grant from IRT Foundation, one of Australia’s largest community-owned seniors’ lifestyle and care providers.

“For the Cycling Without Age movement to really take off in Canberra we need more age-friendly paths for cycling and walking, and more support for active ageing in general,” he said.

“Oh it’s wonderful,” said one of the residents on the inaugural ride. “I didn’t even work up a sweat!” quipped Minister Gordon Ramsay, seated alongside.

Pictured above, a resident of IRT Kangara Waters in Belconnen tries out a new Cycling Without Age trishaw with Ministers Meegan Fitzharris and Gordon Ramsay and Danish Ambassador Tom Nørring.

Alice Caroline - 11 minutes ago
I saw one in a tree along the Queanbeyan river walk💕 so cute! Such a gorgeous idea. View
Dayna Brown - 13 minutes ago
Sally Fitzpatrick 💖💖💖 love it! Working on some Pokémon ones for the local kids now! View
Elise Anderson - 15 minutes ago
Sam Da Cruz but if it makes people happy that’s a plus 😊 View
Lifestyle 11

Zuzette Kruger-Finch - 20 minutes ago
Summernats and Floriade are our big income events here. View
Alan Vogt - 32 minutes ago
No. Maybe in another 20 Years. View
Vanda Catanzariti - 34 minutes ago
Yes... lets do this! 🏆 🏁 View
Lifestyle 30

Kay Pearce - 52 minutes ago
Helen Kook thats just what Grandma (Mrs Prowse) would do!!... View
Helen Kook - 2 hours ago
Knowing my grandmother it would have been an easy walk back in those days View
News 22

TimboinOz - 3 hours ago
SUVs are popular because they fill a lot of needs. We are very happy with our 2015 2.5L Subaru Forester. I've only once manag... View
Graeme Tyers - 4 hours ago
James Forge will be interesting to see the next gen. 3lt petrol or diesel, RWD (potentially AWD) and a hybrid option... View
Opinion 23

@The_RiotACT @The_RiotACT
So what do you appreciate? Is it worth forming a society and telling the world via Facebook? Sure, if you're a fan of corrugated iron, fatty hamburgers and almost every kind of dog https://t.co/CxdoMCKzta (41 minutes ago)