Did we see the best of Blake Austin at the Canberra Raiders? 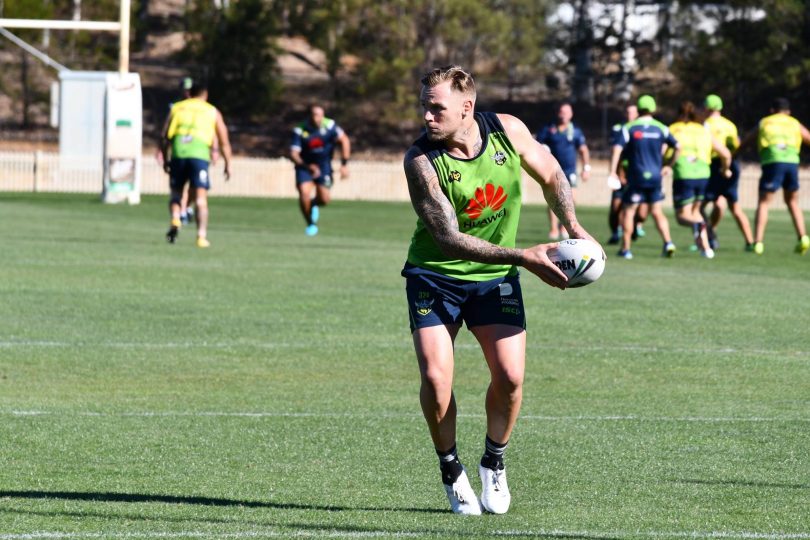 Blake Austin will head to the Super League at the end of the NRL season. Photo: Supplied by Canberra Raiders.

The announcement by the Warrington Wolves that they have signed Canberra five-eighth Blake Austin to a three-year deal will no doubt be met with a certain amount of disappointment by Raiders’ fans.

They are still are on a high from his 15 minute cameo off the bench on Saturday night to win the game for the Raiders against the Bulldogs. It was, by every measure, one of the best 15 minutes from a player in the NRL in recent years.

The question most will be asking though is whether we saw the best of Austin during his almost three years at the Raiders.

He was a player who could create something out of nothing one week only to seemingly drift in and out of a game the next week. He was a player who could bring down the biggest forward with a great defensive hit only to leak a couple the following week, as was the case against the Broncos, which resulted in him being replaced in the starting side by Sam Williams.

To fully understand the psyche of Blake Austin it is worth casting an eye to his life away from football.

He was a star from an early age. In fact, as a nine year old he won the Footy Show’s “In a League of their Own” segment which highlighted outstanding performances by junior football players. The prize was a Holden Jackaroo, which his parents sold to enable the family to move out of their Doonside Housing Commission home in the Western Suburbs of Sydney. The money was used to buy their home in Mount Druitt. When he made it into the NRL he went back to coach the Doonside under 16 team, a team known as the “Uncoachables” because of their poor discipline. Needless to say he took the team to the Grand Final in 2013.

In 2016 he was driving to a game at Canberra Stadium when he noticed a Raiders’ fan in the freezing cold waiting at the bus stop, he turned around and ferried the no-doubt surprised supporter to the game.

I have interviewed Blake on many occasions. I can’t say I know him well, but he is generous with his time. At times I get the impression he is out to prove a point on the field.

The game against the Bulldogs is a case in point. No doubt stung by being relegated to the bench he appeared nonplussed at being the centre of attention after the game.

In 2015 he was the Daly M five-eighth of the year such was his impact for the Raiders in his first season at the club. Now, less than two years after receiving that accolade, he is heading out.

In his statement upon announcing that he was leaving the Raiders, Blake said he believed his best years of footy were ahead of him, he says it is not a cameo at the tail end of his career.

With that comment ringing in the ears of many a Raiders’ fan, I suspect he is right. Judging by what we saw against the Bulldogs and the fact that he seems to perform at his best when he is out to prove a point, I think he is capable of more. As a marquee player at Warrington he will be under more scrutiny than ever was the case in Canberra and English supporters are not backward in criticising players if they turn in a poor performance.

There is no doubt he will be missed. The hope is that he might return after a three-year stint in the U.K Super League as an even better player.

One Response to Did we see the best of Blake Austin at the Canberra Raiders?
Filter
Showing only Website comments

The Raiders management needs to be refreshed.

They have made two blunders this year one being making Blake Austin go and the other failing to give the player currently suspended closer supervision.

Elise Kleeman - 6 hours ago
Kriso Hadskini he doesn't have to share anything. Simply refuse to show evidence, of course you would show if you had it so a... View
Peter Marshall - 9 hours ago
Wayne Martin the long term effects of the polio vaccine aren't known. Everyone might drop dead seventy years after receiving... View
Wayne Martin - 9 hours ago
Argo Jones and how is that when it hasnt been fully trialed and the long term after efects are unknown View
Lifestyle 12

Robyn Baer - 8 hours ago
Drove back today. LOTS of potholes due to the rain. View
Jenny Drenkhahn - 15 hours ago
not to mention changes further South in the Bega Valley Shire; rebuilding in Cobargo and Tathra, Twyford Hall in Merimbula ;... View
Lifestyle 9

Iaian Ross - 10 hours ago
Time Thief is more impressive at night than during the day. Seriously. View
Business 2

kenbehrens - 13 hours ago
Isn't bringing forward future infrustructure builds going to create a construction vacuum down the track? The other issue of... View
shannos - 13 hours ago
Exactly, investors chasing capital gains and creating a self -sustaining ponzi growth model at the expense of our younger gen... View
shannos - 14 hours ago
Too much emphasis on infrastructure and construction which is cyclic transient employment relying on developers growth model.... View
show more show less
*Results are based on activity within last 7 days