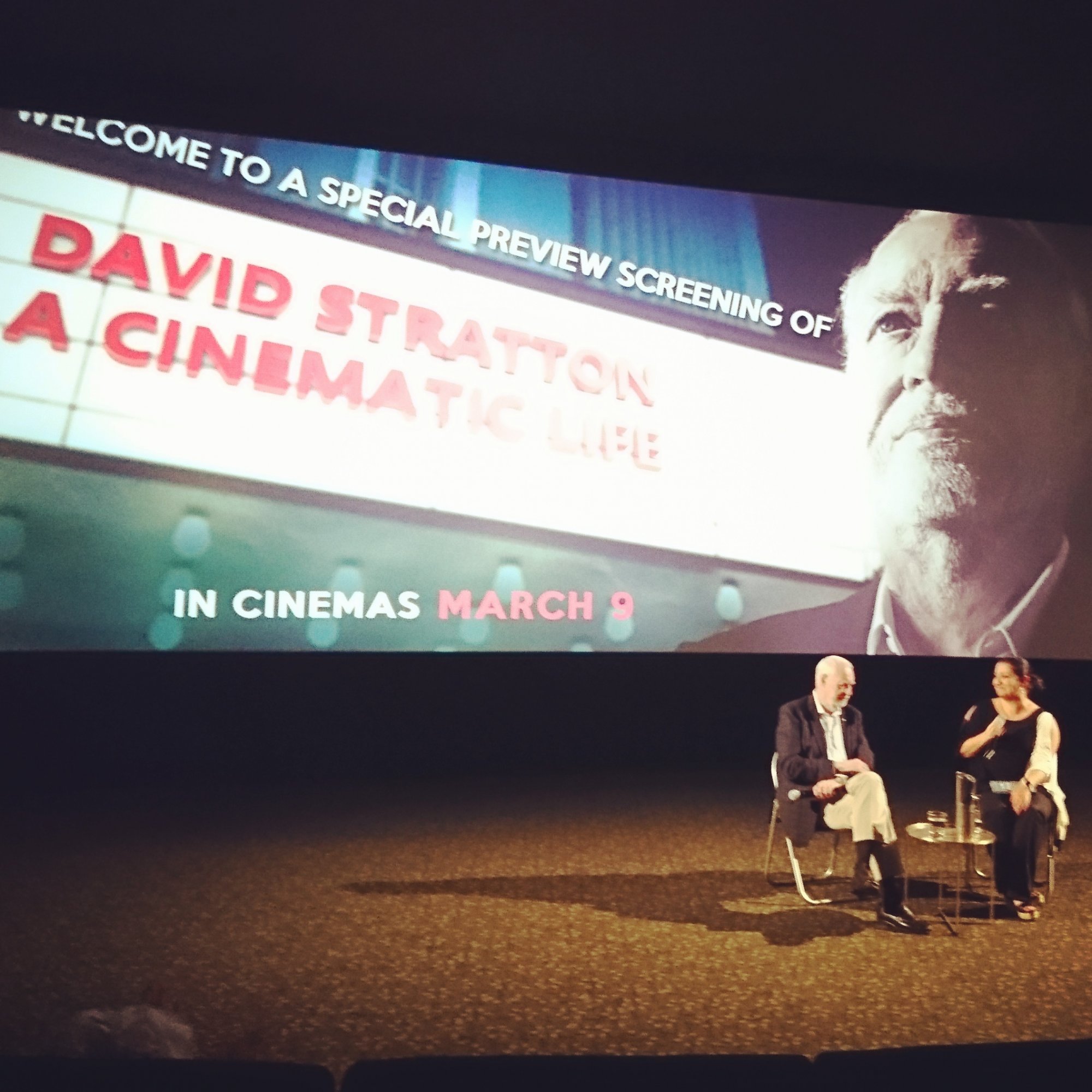 Ariel is our newest regular RiotACT contributor and will be sharing a film review each week.

As one of the lucky ones, this reviewer secured tickets to the packed-house preview screening of David Stratton: A Cinematic Life at Palace Electric Cinemas in New Acton, Canberra. Not only were we treated to the premiere world screening (the first stop in its Palace promotional tour of Australian cities and theatres), we were also graced with the presence of none other than its muse: David Stratton. Being lucky enough to have met and heard Stratton speak locally in December, to behold this cinematic sage twice in a matter of months was a real thrill. Wednesday, February 22 at Palace Electric was a night to remember – a coup for Canberra.

David Stratton: A Cinematic Life, the new documentary from Sally Aitken, is a paean to the legendary British-Australian film critic and, moreover, Australian cinema. Proclaimed a “national treasure” by Margaret Pomeranz, his long-time on-air partner in prime-time, David Stratton is one of the most recognisable faces in Australia when it comes to movies.

For 28 years, Stratton helmed The Movie Show, originally broadcast on SBS, followed by its incarnation as At the Movies, on ABC, with co-anchor Margaret Pomeranz. The duo managed to endearingly ingratiate themselves into our lounge-rooms and lure in many who otherwise didn’t necessarily heed film critique. Both staunch opponents of heavy-handed censorship and tireless proponents of the Australian film industry, the dynamic duo have relentlessly championed and contributed to our cinematic development.

I grew up with The Movie Show/At the Movies and, frankly, I was devastated when they called time in 2014 on the institution that was. Therefore, seeing Stratton talk movies again is most welcome. While the film is ostensibly about David Stratton, he is more the conduit via which we explore Australian cinema history and his relationship with it. Buoyed by myriad vox-pops from stars of Aussie film including Bryan Brown, Eric Bana, Hugo Weaving, Nicole Kidman, Rachel Griffiths, Jacki Weaver, Russell Crowe and George Miller, to name but a handful of actors/directors, the film is something of a love letter from Stratton to his adoptive Australia. It highlights the mutual benefit both Stratton and Australia enjoyed as a result of his migration, and his subsequent relationship with this country through his career involvement in our cinema industry.

Having previously penned film reviews for Variety Magazine over many years, Stratton is one of the best known film critics in the world. Furthermore, he is the preeminent Australian film critic, albeit adopted from his native England. Nationally, his status is undeniable. Having directed the Sydney Film Festival from 1966 to 1983, Stratton would later head up SBS film programming to bring classic and world cinema into our homes, opening as many eyes as he could to the kaleidoscopic beauty of global storytelling. From 1986 to 2014, sidekicks Stratton and Pomeranz were the television tastemakers for the cinema-going Australian public. It was a glorious run as popcorn-punter Pomeranz went toe-to-toe with the encyclopaedic Stratton, dissecting new releases each week. The patron and the professor; they were the yin to each other’s yang. They were the cultured, erudite friends you invited over for dinner once a week to tell you what was what in the world of cinema. They left a legacy yet to be replaced. The movie-critic-mantle is still theirs. A Cinematic Life is a refreshing reminder of their marvellous chemistry as Pomeranz, true to form, doles out her ever choice words to Stratton with her trademark sassy wit and unmistakable laugh. With its assorted contributions from the movers and shakers of Australian film, the documentary is a veritable delight which ranges from funny, informative and genuinely moving. One particular anecdote even had me in tears.

An ode to the power of cinema, a klaxon for cross-cultural embrace, and a tribute to a man who has adopted us so that we may adopt him back, David Stratton: A Cinematic Life is essential viewing for film-lovers and a history lesson in itself on the evolution of Australia and our cinema industry. The documentary also touches on the significant historical relationship shared between Australian film and Indigenous culture.

Three one-hour episodes comprising a more in-depth mini-series exploring Australian film have also been commissioned as a companion piece. This is due mid-year on the ABC for those eager for more. I know I am. And speaking of more, David Stratton has definitely seen more films than you have. With an impressive personal cataloguing system, his disciplinary approach to cinema has yielded a mind-blowing count. See the film to learn that staggering number.

David Stratton: A Cinematic Life is a fantastic addition to the Australian cinema canon. I only wish it had been longer, but here’s holding out for the ABC content. Definitely worth your time and an absolute must for the cinephile.

Four out of five stars.

The man is certainly a giant of film – in this country and more generally. I hope you enjoy it!

I am a great fan of David Stratton. He has always been a warm and engaging person and I have only rarely disagreed with him. I am so glad you have given this movie four out of five – I will be off to see if very soon. I