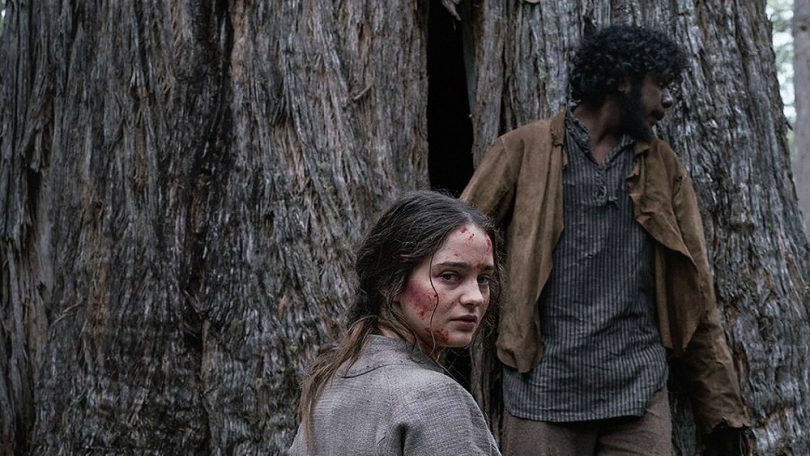 Aisling Franciosi and Baykali Ganambarr in The Nightingale.

This is your wake-up call – in more ways than one. And if you needed a reminder of the quality cinema this country is capable of producing, look no further.

One of 2019’s bleaker releases, this is typically fearless Australian film-making. However, full disclosure, this is a sledgehammer of a film. If you can withstand the emotional drubbing and spiritual shredding, this is an extremely accomplished work wholly deserving of your attention which both ravages and rewards its viewers over the course of its two-hour run-time.

Following the breakout success of her debut feature The Babadook (2014), writer/director Jennifer Kent returns with The Nightingale. Set against the beguiling Tasmanian wilderness where it was filmed on location, this is a striking work both visually and thematically. At its core, it is a tale of female fortitude amid intolerable cruelty.

The year is 1825 and young Irish convict woman Clare is living a hard life typical of the times with her husband and newborn. Portrayed by Aisling Franciosi (The Fall), our protagonist is dealt the cruellest of hands which sets her on a ruthlessly resolute and absolutely understandable quest for vengeance with genuine justice an entirely elusive recourse. As she embarks on her violent odyssey – evoking the controversial I Spit On Your Grave (1978) – she encounters and enlists black tracker Billy (a revelatory first-time turn from the ever natural Baykali Ganambarr). Coming from completely different worlds but having both suffered dehumanising disenfranchisement, it is their bond shared through loss and forged through tragedy which propels them together towards any salvageable semblance of restitution.

That this is only the second feature from writer/director Jennifer Kent is astounding. Even more remarkable are the utterly compelling performances she has elicited from her cast. Still quite early in her career, Aisling Franciosi has turned in a performance which is both incredibly intense and truly brave.

For good reason, the production had clinical psychologists on set to help actors deal with filming some of the more demanding and uncomfortable material.

Sam Clafin (Adrift; Me Before You) is totally reprehensible in his role and to great effect. Damon Herriman (The Little Death; Quarry; Justified), one of the most prolific character actors getting around at the moment and a credit to Australia’s film-making fraternity, plays partially to type here and is perhaps the slightly weaker of the central cast but that is not a criticism so much as a mere endorsement of excellence elsewhere. Case in point: even a child actor delivers some of the film’s most aurally strident and emotionally penetrating lines.

With similarly stern subject matter, The Nightingale is reminiscent of other revisionist and raw Australian output. Its breathtaking brutality and arresting grittiness hark back to The Proposition (2005), Van Diemen’s Land (2009), The Rover (2014) and the more recent Sweet Country (2017). Like Sweet Country, there is no pussyfooting here. Jennifer Kent does not hold back in portraying an unforgiving new frontier where colonists took and did as they pleased. The deeds doled out are objectively excessive in nature. However, given the atrocities and human injustices which continue to plague our planet today, sadly they never feel like a stretch which beggars belief. A work of art which is unflinchingly tragic, it is also a work of heart which is wholly sympathetic to the plight and illuminating of the mistreatment of both women and indigenous people the world over.

Simple artistic choices writer/director Kent has taken such as the film’s aspect ratio, point of view framing and the sparse soundtrack immerse the viewer and contribute powerfully to the ultimate resonance of the tale. The Nightingale pulls no punches. For this very reason, it packs an enormous punch.

If you are prepared to be challenged, seek moving cinematic experiences and are not in denial of how outrageously cruel this world can, has and continues to be – especially to the vulnerable – take a seat and steel yourself. This is a sensory bludgeoning which will leave you hopelessly shell-shocked at how horrible humanity has been to itself.

You have been warned, but The Nightingale still demands to be seen and her message heard.

Four out of five stars.

The Nightingale is showing at Dendy cinemas and Palace Electric cinema in Canberra.