Does the Eurobodalla have a drug problem? – Yes 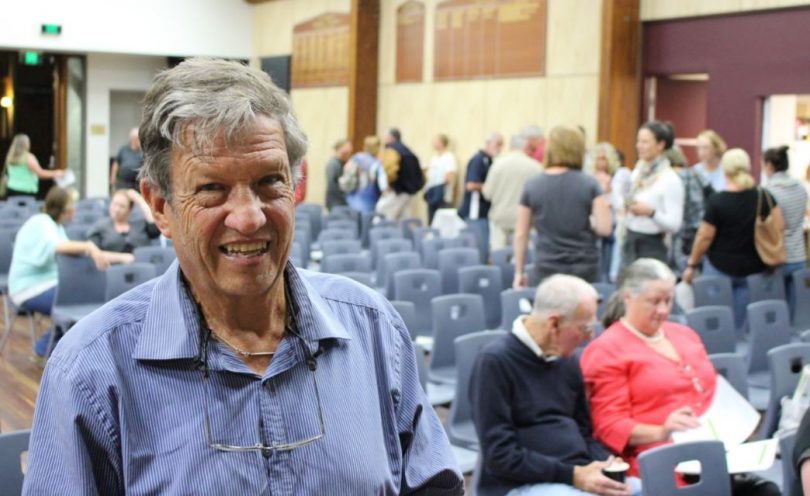 The Eurobodalla is taking action on drugs and alcohol after hearing heart-wrenching first-hand accounts of the impacts being felt locally.

A community meeting driven by the three Rotary Clubs of the Eurobodalla attracted almost 200 people on Monday (April 9) night to the St Mary’s Performing Arts Centre at Moruya.

The room was a mix of ages and backgrounds, not the usual crowd, a sign that this meeting had struck a cord in the community.

Publicity around the event focused on Dr Gordian Fulde, 2016 Senior Australian of the Year, and recently retired boss of Emergency Medicine at Sydney’s St Vincent’s Hospital.

Posters shared on social media and plastered to shop fronts asked the question, “Does the Eurobodalla have a drug and alcohol problem?”

Dr Fulde’s 30-year experience and the evidence he presented left no doubt in peoples mind that Australia has a drug and alcohol problem.

Research released just five days ago seemed to have the greatest impact on Dr Fulde’s audience.

The National Wastewater Drug Monitoring Program covers 54% of the Australian population, with testing carried out at 45 water treatment plants which account for 12.7 million people.

Wastewater from Australia’s bathrooms is seen as a reliable tool to measure drug use across communities, with testing done by the University of Queensland and the University of South Australia on behalf of the Australian Criminal Intelligence Commission.

Dr Fulde says, “We have become a stimulate society, Australia has an insatiable appetite to alter reality.

“And the age group where the increase has been most marked is 15 to 34-year-olds – sh*t we have a problem,” he says. 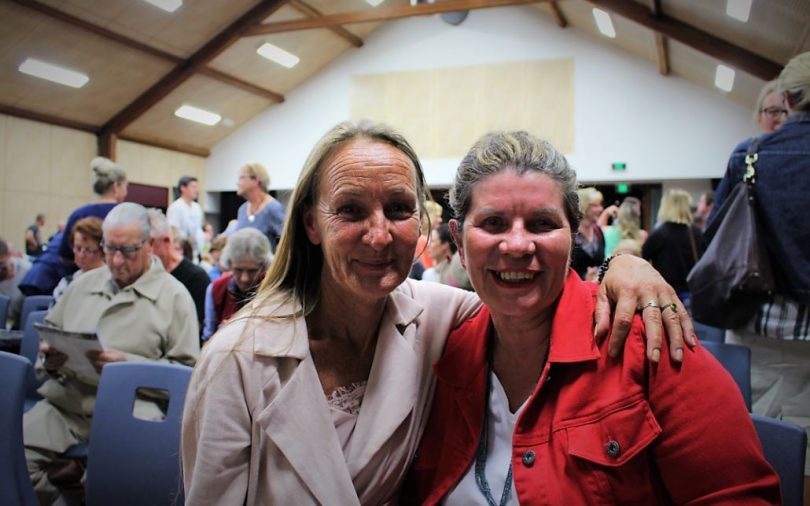 The impact that level of usage has on real people was demonstrated simply and graphically by two local mums who made the stats Eurobodalla specific.

Narooma’s Michelle Preston and Dalmeny’s Donna Smith (Smith is not Donna’s real surname, withheld for legal reasons) approached the microphone nervously but soon found the strength to share their story, willed on by the supportive audience.

“In March last year Donna and I found ourselves sitting at Narooma Courthouse,” Michelle says.

“Of the 16 people appearing in court that day, 13 were there for offences relating to Ice use.”

Brought together by the despair of their situation, Michelle and Donna formed a support group on the back of that day in court for parents, grandparents and carers.

“I’ve had ten years of this in my family and my son will never be the same again,” Michelle says.

“My son is currently homeless, he’s been to jail three times, and nothing I can do as a mum, and god knows I have tried, is going to stop him until he is ready.”

Donna’s story is similar but different and starts in 2014.

“I had just sold my home and was at Uluru on a quick holiday and I got the phone call no grandmother wants to receive,” Donna says.

“My grandkids had just been taken into care, six police officers and two FACS (NSW Family and Community Services) workers had removed one of my grandchildren from school – how traumatising for a seven and a half-year-old.

“Mrs Smith, we have your grandchildren here what would you like us to do? they said to me.”

At 54 years old, with her son currently in jail, and having already lost one young grandchild to drugs, Donna is now caring for three of her grandchildren, including a newborn.

“He was a little ice addict baby, there is nothing more horrific than watching a little baby come down off ice,” Donna says.

“My current journey will finish when I am seventy-four, I have stopped my life to raise my grandchildren.

“But if I can break the cycle, stop my granddaughter getting pregnant at 15, then drugs, and jail – then I’ve won the battle.”

Both Michelle and Donna spoke of the shame, embarrassment, and isolation they have felt during their families’ struggles and encouraged other local families to step out of that shadow and connect with others.

The Facebook page and support group they started Ice – turning family pain into power is gathering momentum and drawing people together.

Michelle says parents are looking for advice on what to do and how to help their children.

“Do not enable your children to use drugs – do not give them money, do not buy food for them, do not house them,” Donna says.

“The love you have to show your adult child by turning your back on them comes from deep down in your soul.

“There is nothing you can do for them, they have to be out there in that pouring rain at night until they put their hand up for help.”

It’s advice Michelle delivers clearly but is edged with the pain it instinctively inflicts on a parent, and with her own fear that her son will never escape his current life.

“I have planned my son’s funeral, I don’t want any of you to have to do that,” she says. 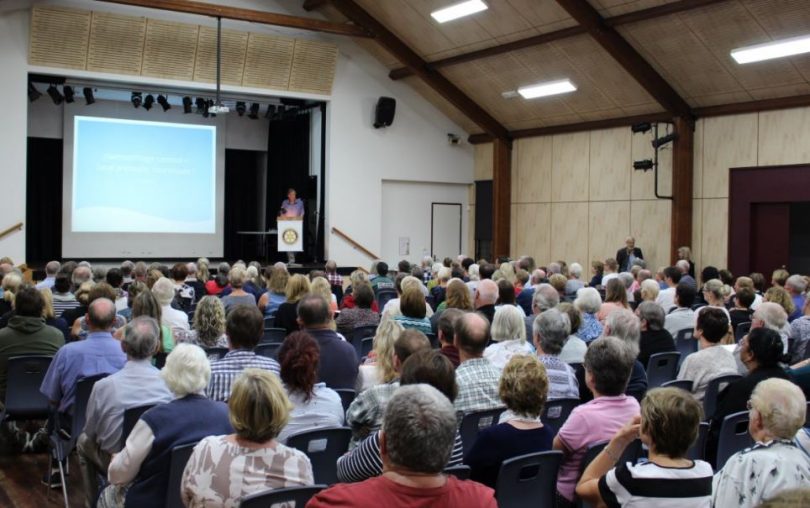 Almost 200 people turned out for the “Does the Eurobodalla have a drug problem?” meeting in Moruya. Photo: Ian Campbell

Looking for solutions and ways to help, Monday’s community meeting struggled to explain the reasons behind Australia’s growing drug problem.

Dr Fulde believes self-esteem plays a role; people looking to be valued and feel like they have a purpose.

“If a kid is starting to act differently, and that can be at any age, people can pick it a mile away, and that is really the only time and the best time to step in and do something – find out what is going on.

“One of the biggest things you can do is make that person feel worthwhile, don’t sweep it under the carpet,” he says.

The Rotary Clubs of Batemans Bay, Moruya, and Narooma committed themselves to continuing the discussion and facilitating the search for local solutions and prevention options.

“There are agencies within our community with drug and alcohol programs, we want to get those agencies together to form a Local Drug Action Team,” Mike says.

“We can bury our heads in the sand or we can do something, we want tonight to be the start of that.”

Hope that something concrete might flow from the meeting was palpable, but at the very least there was a sense that a community issue had been shared and that increased awareness and acceptance was an important step.

Rose Lovejoy - 3 hours ago
Michelle Jenkins I could see you here. View
Allison Lubransky-Moy - 3 hours ago
Erica what a dream 😍 View
Bethany Corr - 4 hours ago
We will keep the main cottage, you guys build your dream house! Craig Corr Hayden Miller View
News 19

Jennifer Gee - 4 hours ago
Some really spiteful comments on here. He was very young when he entered the limelight and acted out as many young teens do w... View
Alan Davey - 6 hours ago
Very loose has he grown up yet more show than go onthe fringe... View
News 2

@The_RiotACT @The_RiotACT
It’s that time of year again: holidays, heat & the Hottest 100. Here are the Canberra bands to listen out for this year https://t.co/sojU14ngrJ (1 hour ago)