Doggone it, now pooches can set float on GoBoat Canberra 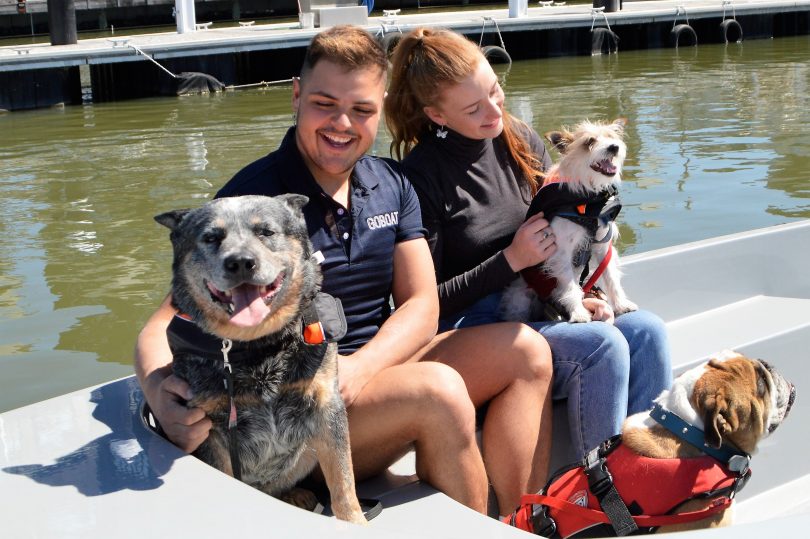 If you think our four-legged friends sometimes have it a bit ‘ruff’ and miss out on the fun then let’s have a round of ‘appaws’ for GoBoat Canberra which is welcoming pooches aboard if they want to set float with their owners.

‘Big Mac’ the bulldog, ‘Buster’ the blue heeler and ‘Rufus’ the parson russell terrier are among the range of Canberra dogs to take to the water in one of the popular self-drive electric picnic boats since GoBoat started promoting the fact they are ‘100% doggo-friendly’ earlier this month.

Other pooches to take the plunge (but hopefully not literally) have included kelpies, sausage dogs, German shepherds, poodles and more.

Canberra’s dogs are ‘going mutts’ about the news that GoBoat Canberra is ‘100% doggo-friendly’. ‘Big Mac’ the bulldog, ‘Buster’ the blue heeler and ‘Rufus’ the parson russell terrier (all shown in this video) are among the range of dogs to take to the water in one of the popular self-drive electric picnic boats. The cuteness factor is ‘pawsome’ given that the pooches get to wear their own life-jackets, which come in a variety of sizes.

The cuteness factor is ‘pawsome’ given that the pooches get to wear their own life-jackets, which come in a variety of sizes. There is even a pirate’s hat lurking around for the swash-buckling breeds.

The fur-children get to ride for free, although there does need to be more humans than dogs. 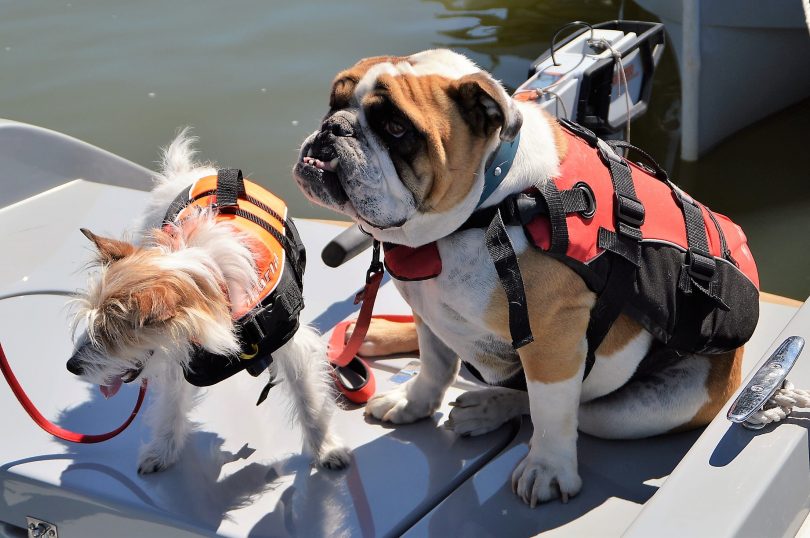 Rufus the parson russell terrier and Big Mac the bulldog take charge of the boat while kept safe by their life vests.

Recently, there has been at least one dog enjoying a GoBoat each week but those numbers are likely to dramatically increase given that Canberra dog-owners have been ‘going mutts’ about the ‘oppawtunity’ on social media.

GoBoat Canberra owner Nick Tyrrell said there was strong demand last season from people wanting to take their dogs on the picnic boats.

“Although our answer was ‘yes’ we just never promoted it. We love puppers so I wanted to make sure that this season everyone knew their doggo was very welcome,” said Nick, who is also Big Mac’s owner. 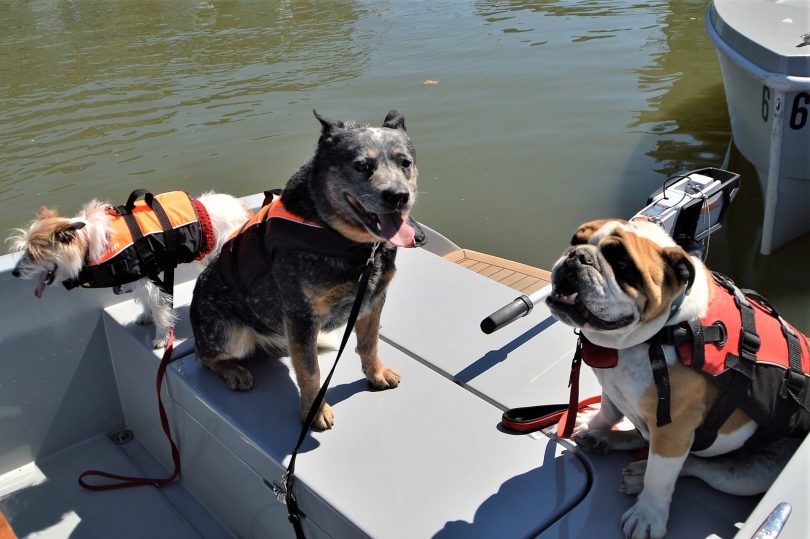 GoBoat Canberra business developer Jon Balzanelli said the dogs who embark on the adventure always seem to enjoy themselves, although some of them aren’t thrilled about the dock they have to traverse on the way to the boats because it is unsteady. 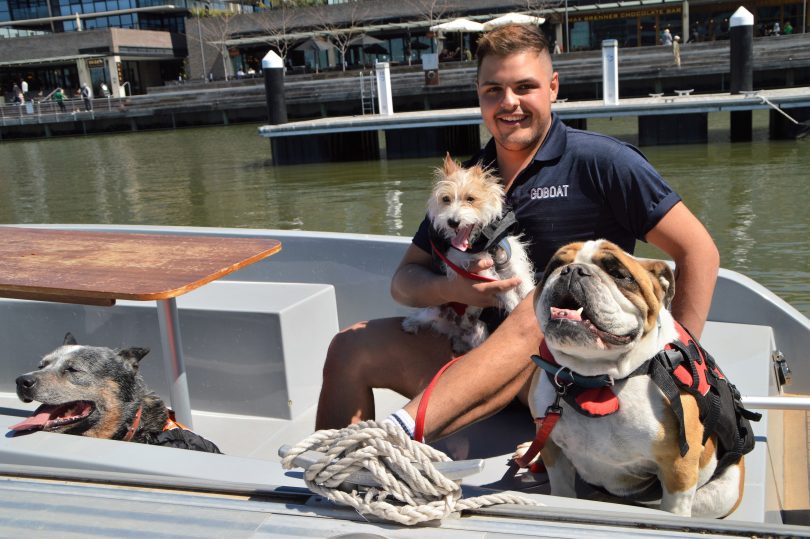 “Dogs are really part of the family and we want to bring that into our business as well,” said Jon, who owns Buster.

Becky McFarlane of Garran took her dog, Rufus, on a boat in June (before the idea was promoted) and was back again with him last week. The main problem in June was the cold weather but Becky said “we just got to snuggle”.

“It was the first time he had been on a boat or seen a boat.

“He had fun – he was enjoying himself,” said Becky, adding that he looked very cute in the photos. 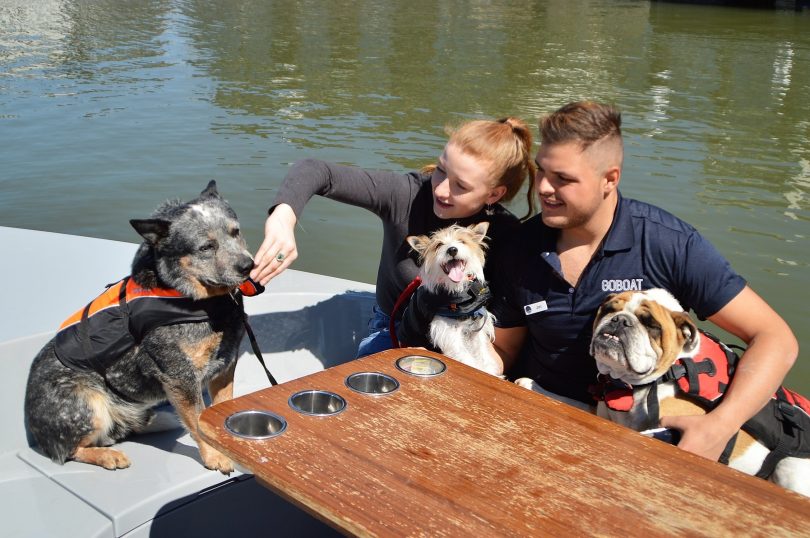 Doggy treats seem just the thing on a picnic boat.

GoBoat Canberra was launched last November, with our city becoming the first location outside Europe to experience the self-drive electric picnic boats which seat up to eight people.

Since then, GoBoat Canberra has proved to be very popular with people wanting to enjoy their own boating experience on Lake Burley Griffin without the need for a boating licence.

“Last season more than 10,000 people came on a GoBoat and we were only open from November,” Nick said.

“This year we’ve got an extra two months, because we opened after winter on 1 September.

“We’re also extending our opening hours over summer, after investing in extra batteries for the boats which will allow them to run for about 50 per cent longer.”

JS9 - 40 minutes ago
There has certainly been a distinct shift to chest beating since Dutton has become Minister. That is his style, and he won't... View
JS9 - 43 minutes ago
By strategically aligning in particular with the US at this time in the public 'look at me' way we have, we are lining up beh... View
Capital Retro - 1 hour ago
It's way too late for us to be bolstering up the economies of South Pacific island countries, JC: https://www.brookings.edu/a... View
News 2

Maya123 - 2 hours ago
I'm not 100% sure who you were answering. I don't think anyone would necessarily argue with what you wrote. I think the relat... View
JS9 - 3 hours ago
The most heartwrenching cases are for those towards the end of their careers with still lots to give, but not given a chance... View
JS9 - 4 hours ago
I always find comments like this amusing. That somehow the next generation is infinitely worse then previous generations - th... View
News 15

The promise of better light rail access to the Mitchell business hub is now a reality with services commencing on...
Opinion 46

@The_RiotACT @The_RiotACT
Dance schools across the ACT are set to begin sharing important water safety messages online thanks to a new partnership between @READYSETDANCE_ and Kids Alive https://t.co/wOE8ncSt0z (46 minutes ago)