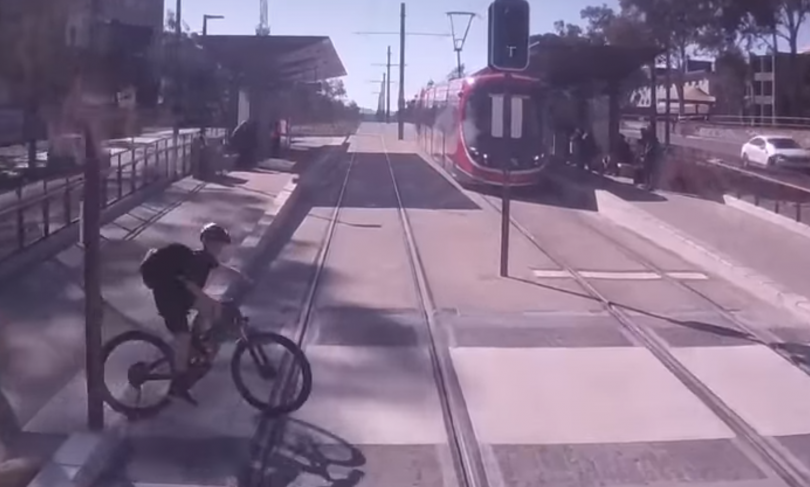 A young cyclist in front of two oncoming vehicles in a screengrab from footage released by ACT Government.

Cyclists narrowly avoid being hit, a taxi mere centimetres from crashing, vehicles stopping mid-track and an elderly gentleman falling in front of a light rail vehicle are just some of the near misses on the light rail corridor as Canberra prepares to hail its first-ever Rail Safety Week.

With Rail Safety Week just around the bend (12-18 August), the ACT Government has released an updated video of Canberra’s near misses with the LRV, as pedestrians and motorists narrowly avoid being hit by Canberra’s latest public transport vehicles.

The footage captured via dashcam on board the LRVs shows around two dozen near misses, with some people lucky not to be seriously injured.

The footage shows pedestrians walking in front of the LRV, people riding scooters and bikes just stopping in time, with one young bicycle rider crossing the tracks in front of two oncoming vehicles.

In a heart-stopping incident, an elderly gentleman trips and falls onto the tracks as a vehicle pulls into the Alinga Street station, narrowly avoiding the man.

A fellow patron manages to help the man get back to his feet and off the tracks, with the time stamp on the video showing the near-miss occurred around 1:10 pm on 18 May. 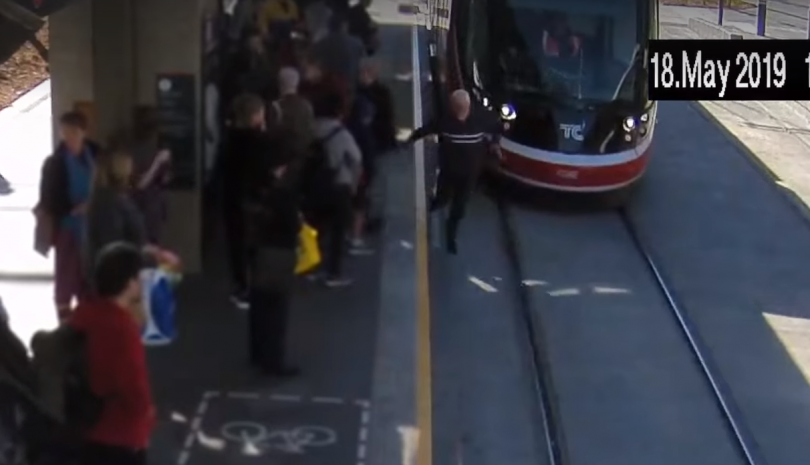 A man falls in front of an LRV.

There has only been one reported car and light rail collision since the service launched.

Transport Minister Chris Steel urged Canberrans to be aware when they’re driving or walking around the light rail tracks.

“Pedestrians need to stay alert and always look both ways before crossing at intersections and crossings. Light rail vehicles can approach from either direction and at any time,” Mr Steel said.

“Motorists should follow traffic signals and make sure not to queue across the tracks at any time.”

“With each light rail weighing around 40 tonnes, it’d be like getting hit with six elephants at once,” Mr Rattenbury said. “Please take care around our big, red light rail vehicles, Canberra!”

The electronic “clanger” audible alarm isn’t satisfactory, needs to be louder with more alarm about it. It’s only a matter of time before someone is skittled.

So six elephants weigh around 40 tonnes? Why not say “Being hit by 40 tonnes of tram is an unpleasant experience”?

The danger is increased if the path runs parallel to the track. It’s harder to see what’s behind. That’s a very dangerous way to build paths that cross. The safest crossings approach straight, directly to the track, with good signage, both beside and on the path.

Get those things off the roads. Either that or make them noisier.

If necessary I guess boom gates, similar to the boom gates on the footpath that crosses the rail line near Bungendore Station could be used. But more expense. Best if people learnt to look before they cross and take off those ear phones. And the trouble with boom gates is that the sort of people who don’t look, are likely the same sort of people who would ignore the boom gates and go around them. I hope the crossings have sounds for the sight impaired.

I’d like to see all the other ones where the tram runs the red lights etc too!

Heavy vehicle, and relatively silent, people being inattentive, or thinking they have time to get across will result in near missed or not misses.
ACT transport are going to have to keep up the safety warnings regularly in particular in the period people are becoming accustomed to their constant presence. 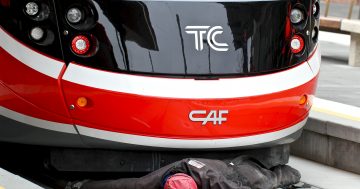