The driver charged over the crash that killed rising ice hockey star Lachlan Seary has pleaded guilty to causing the 19-year-old’s death and now faces spending up to 14 years in jail.

Peter James Loeschnauer, 29, was originally charged with manslaughter but pleaded guilty to the lesser charge of culpable driving causing death when he appeared in the ACT Magistrates Court on Thursday (30 September) while members of Mr Seary’s family watched on.

The documents alleging the events of the case have not yet been fully agreed, but those already tendered to the court show Loeschnauer began drinking at the Fenway Public House in Phillip on 7 March 2021, before going back to his home in Gilmore to borrow his father’s Honda Civic then meet friends at Assembly Bar in Canberra city.

About 1 am on 8 March, he was allegedly recorded speeding at almost 150 kmph on the Monaro Highway at Fyshwick, a few minutes before running into the back of Mr Seary’s Toyota Corolla. The Corolla rolled and struck a tree, killing Mr Seary.

Shortly later, an Uber travelling along the highway stopped when its occupants saw the debris. The Uber passenger walked to the stationary Honda Civic, saw Loeschnauer and asked if he was okay.

Loeschnauer allegedly replied that he was fine and he had hit a kangaroo. As they tried to move the Honda Civic off the road, the passenger saw the Corolla and asked what happened to it.

He later allegedly told police several times that “he thought he hit a roo”.

Police allege he drank 11 drinks over about two hours when he was at Assembly Bar before leaving just after midnight. He was also allegedly found to have MDMA in his blood.

Loeschnauer appeared over phone in court on Thursday.

“Yep, all good,” he said when Magistrate Beth Campbell called the matter.

“So that was him announcing his appearance,” she remarked.

Prosecutor Patrick Dixon withdrew charges of manslaughter and dangerous driving and Magistrate Campbell asked Loeschnauer if he was pleading guilty to a charge of culpable driving causing death.

He also pleaded guilty to drink and drug driving. His lawyer, Tom Taylor of Hugo Law Group, asked for the matter to be referred for restorative justice.

Magistrate Campbell committed Loeschnauer to the Supreme Court for sentencing, with the first mention in the higher court to be on 14 October. He was also granted bail. 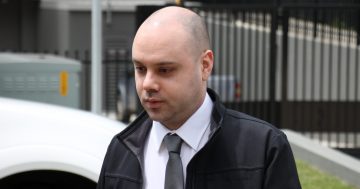