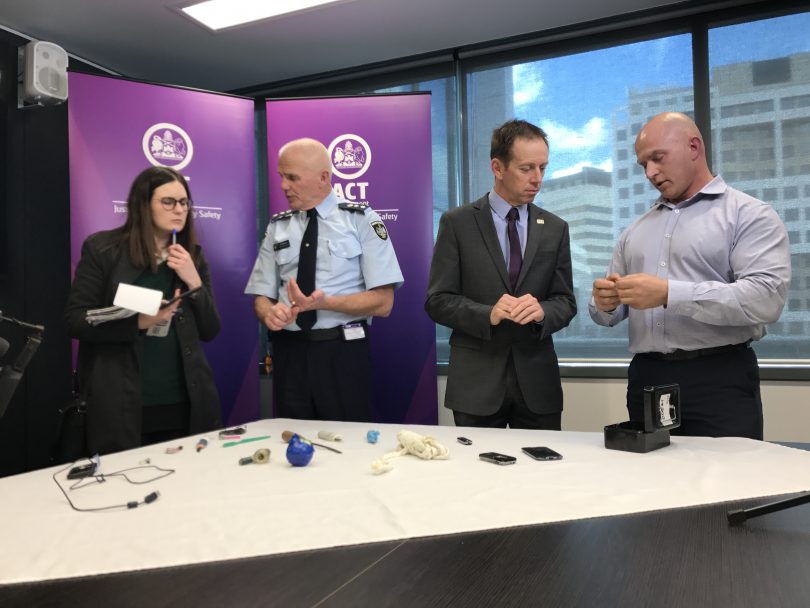 Corrections Minister Shane Rattenbury inspecting some of the contraband items. On his left is Paul Rushton, Custodial Operations and on his right is Peter Robinson, Corrections Intelligence Unit.

ACT Corrective Services intercepted or removed 740 prohibited items such as drugs and mobile phones from the Alexander Maconochie Centre during 2016-17 – the result of 7,000 searches.

The contraband seizures are seen as removing a significant safety threat to detainees and the broader Canberra community.

Among the other items seized by Correction officers were 30 mobile phones, 41 USBs and 44 mobile telephone accessories such as chargers, SIM cards and SD cards. 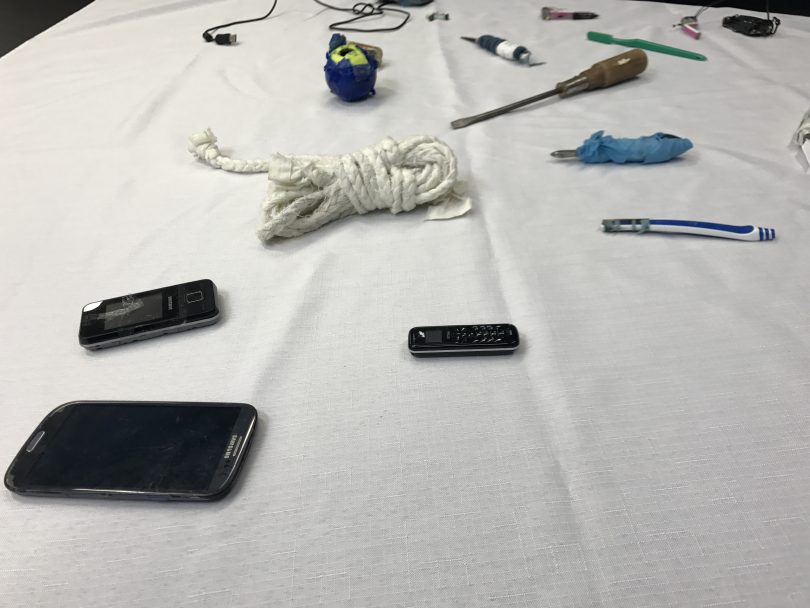 Some of the 740 contraband items seized.

There are strict security measures at the prison to help prevent the entry of prohibited items or to seize any that are there.

Correction officers conduct physical and area searches, and there are a series of detectors and scanners. There are also 525 CCTVs to monitor movement and behaviour in the Alexander Maconochie Centre.

In 2016-17, Corrections officers conducted 2,533 area searches and 4,655 individual location searches to minimise the amount of contraband entering and within the prison.

Contraband seizures include circumstances where prohibited items have been intercepted prior to their introduction into the prison.

ACT Corrective Services and ACT Policing share information and intelligence to help prevent and address the introduction of contraband.

ACT Corrections Minister Shane Rattenbury said that intercepting contraband is a significant challenge, just as it is for all corrections’ jurisdictions.

“I want to assure the community we are remaining vigilant, taking a range of precautions to detect and prevent prohibited items from entering the AMC,” Mr Rattenbury said.

“ACT Corrective Services has a renewed focus on security and intelligence-led operations, which will help to continue to prevent and reduce the introduction of contraband into the AMC. Part of this renewed focus is as a result of the recent security review,” he said.

“Thanks to the hard work of our correction officers, large amounts of contraband is detected and seized at the AMC.”

Arlene Smith - 38 minutes ago
Kathleen Mary Smith Erin Winter in adventure park? View
Bridget Trussler - 1 hour ago
My son many years ago went head into the pole. Please get rid of it before someone is killed...... View
Claire Anderson - 2 hours ago
Daniel, the newer ones really do stop way WAY more abruptly. I too rode the old ones with help of people pulling and never go... View
News 13

@the_riotact @The_RiotACT
Bored with your usual #dining options? Why not try #Ethiopian? There's a reason Ethiopian Down Under is Pearce is a beloved #institution. Let Michelle Taylor guide you on this culinary adventure https://t.co/UZL0Yvgkar (34 minutes ago)