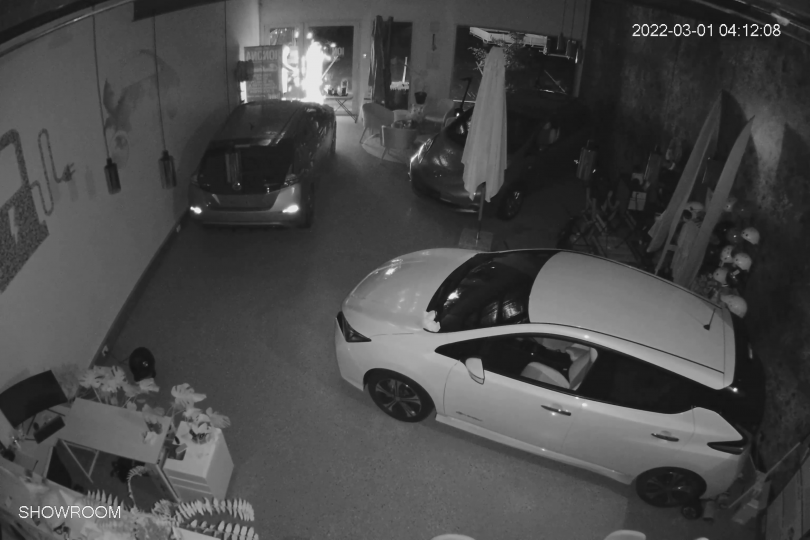 CCTV footage from the break-in over the weekend at ION DNA Electric Vehicles in Fyshwick. Photo: Supplied.

Targeted burglaries of e-scooter and e-bike shops have continued across Canberra this week after ACT Policing last week revealed there had been eight separate incidents since 31 January.

Trek Bikes in Phillip, Cookie’s Cycles in Franklin, ION DNA Electric Vehicles in Fyshwick, Canberra Electric Bikes in Phillip, Scooter Hut in Belconnen and Walk Smart in Campbell have all been targeted by thieves in the past five weeks.

There have been three incidents in the past two days, including two at ION DNA Electric Vehicles in Fyshwick.

ION DNA owner Rob Ogilvie said he has struggled to sleep after thieves took the five remaining scooters from his store yesterday (1 March) despite his best efforts to increase security.

“The [robbery] yesterday was the bigger one. We don’t have any scooters left now,” said Mr Ogilvie.

“They tried their normal way yesterday, and I put extra security there, so they just did something different.”

Mr Ogilvie believes the rise in e-scooter and e-bike theft is a result of it becoming increasingly difficult to sell more traditional stolen items such as laptops and phones. He likened it to the recent spike in tool theft.

He also linked ACT Policing’s inability to prevent these targeted burglaries from occurring to the ongoing police shortage. Mr Ogilvie believes that if ACT Policing were appropriately resourced, they would have been conducting high-profile patrols at the different e-scooter and e-bike retailers.

In the CCTV footage, Mr Ogilvie describes the perpetrators as “very relaxed and very casual”. He doesn’t believe it’s the work of organised crime but does think the thieves seem to plan the burglaries well in advance.

As he has struggled to sleep over the last two days, he has been watching the live CCTV footage at his store and has noticed a greater police presence in recent days.

ACT Policing believes the incidents, which store owners estimate has resulted in the theft of products worth more than $200,000, are linked and that one group may be responsible. A vehicle involved in one incident has been recovered and is being forensically examined.

Police would like to speak with anyone who witnesses any suspicious activity at the locations listed above. Criminal Investigations, General Duties policing, AFP Forensics and ACT Policing Intelligence and Digital and Video Operations are all involved with the investigation.

If e-scooters and e-bikes (all bikes for that matter) were required to be registered it would be a big disincentive for these things to be stolen.

But that’s just common sense so let’s move on.

It doesn’t seem to stop people stealing cars, and they have VINs.

Nothing stops people stealing cars and deliberately trashing them. Having a VIN or any other ID on them is academic under those circumstances.

The point I was making was they can’t sell the cars or “re-birth” them anymore anywhere in Australia. The same situation would apply if registration was applied to scooters and bikes.

Bikes already have a unique identification number on the frame – probably most people buying a second-hand bike wouldn’t bother to check if it was reported stolen – especially if they get cheaper bike out of it (and I’d suspect most people reporting bikes stolen wouldn’t have bothered to record the number anyway).
There is a cost to administer registration, and it comes down to whether that cost is worthwhile for what it achieves – I’d expect the market for re-birthed bicycles wouldn’t be big enough to make registration worthwhile, especially when our local council is so overwhelmed just by car registration, being unable to ensure all the motorised vehicles on our roads have current registration!

Good points, tim-c. Having a rego plate on a bike or scooter could make their riders more accountable too.

Meanwhile, there are plenty of new/near E-bikes and E-scooters for sale on the internet. Where do they come from?

Its not just burglaries that are on the increase, bug drug driving deaths are increasing too.. Innocent Canberrans are in the firing line of this weak AF policing… and WE PAY FOR IT, and all we got was a stupid Tram that haemorrhages money and saps our resources…

Yes, these sort of crimes do not happen anywhere else other than the ACT…

The Canberra City Councillors are going to get rid of drug crime altogether by decriminalising hard drugs – just like that: no more drug crime (because it’s no longer a crime)

Just hang around in the alleyway that runs up the back of Charny shops to the underpass and you’ll be able to recover them.

Police resources are insufficient.
But more problematic is inefficient criminal sentencing.
What’s the bet these muppets already have a rap sheet, and once caught will get a magistrate warning and will see no jail time.

The economics of EVs is becoming the path of least resistance