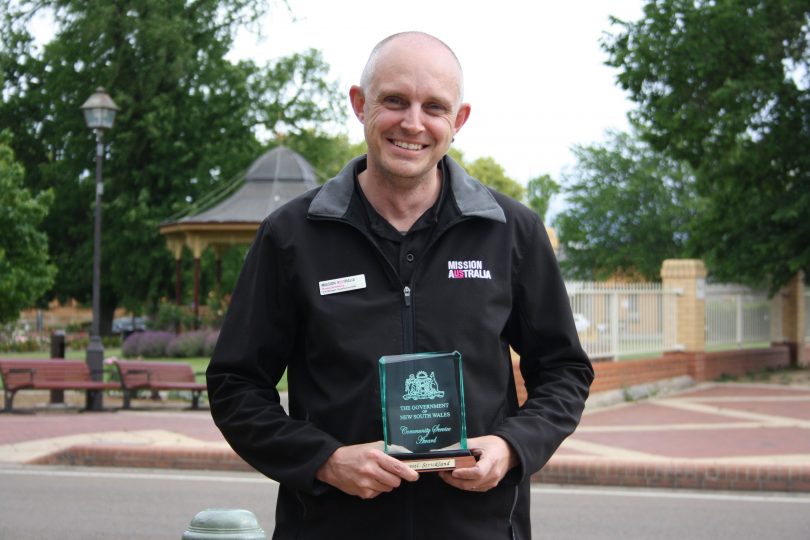 Daniel Strickland was recently honoured with the NSW Government Award for Recognition of his contribution to community service. Photos: Supplied.

What makes a policeman leave the Force to drive a Mission Beat van, picking up the homeless off Sydney streets? It’s not your average career change, but it was one that allowed community leader Daniel Strickland a chance to stop a predictable cycle.

“I was a police officer for six years and during that time I saw a lot of similar people. I thought there was so much more that could be done. We would lock them up, put them before the courts and walk away, and the same thing would keep on happening,” Daniel said.

That was 17 years ago and Daniel is now Mission Australia’s Area Manager for South Eastern NSW and the ACT. He’s been living in Goulburn for the last six years with his wife and five children and, recently, received the NSW Government Award for Recognition of his contribution to community service.

The award was unexpected, even though he either chairs or is involved with multiple community initiatives: the Suicide Prevention Network, the PCYC Committee, the Domestic and Family Violence Committee and the Lilac City Festival Committee.

More recently he’s been instrumental in getting The Man Walk up and running – an initiative that provides an opportunity for men to get together to walk, talk and support each other.

Nevertheless, the award was unexpected. Organised by his colleagues in collaboration with Member for Goulburn, Wendy Tuckerman, representing the NSW Government, with his wife making a surprise appearance, Daniel thought the occasion was a morning tea for one of the Mission projects.

“I was blown away and shocked. I had no idea … everyone was in on it, the police, other service organisations, and my wife. I nearly shed a tear. I was genuinely surprised,” Daniel said.

It’s rare that one person is willing to be involved so deeply in many community initiatives but Daniel always had the ambition to help others.

“As long as I can remember I wanted to be a police officer and I wanted to help people, particularly in times of trouble,” he said.

Whether it’s Sydney or Goulburn, the disadvantage is common to the cities and the rural regions and towns. Drug and alcohol issues, mental health, homelessness, and family and domestic violence are top of the list that needs, and benefit from, early intervention.

“If you can intervene early, then there’s hope.” 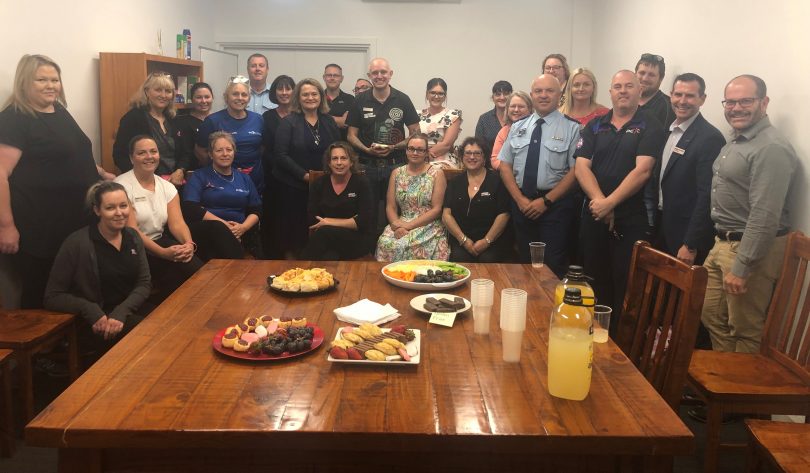 Loneliness is also endemic, regardless of location. That’s why community initiatives and development can offer an answer.

“Loneliness is a huge issue. You see the keyboard warriors on social media for example, but they are using that connection with others to express themselves,” he said.

“I want to help people to help themselves; to give them a hand up not a hand down. Mission Australia’s Place Plan initiative in Goulburn is about developing the community so they can help each other. The Man Walk is another initiative where the men help each other.

“Mission Australia and other not for profits have only a certain amount of funding and funding cycles finish … we’re not always going to be around, so it’s a matter of if we’re not around, who in the community can keep doing this?”

As for the main social issues in the Goulburn region, domestic and family violence, alcohol and drugs and a lack of affordable housing, stand out.

“Often they work in together,” Daniel said.

However, there has been progress in all three areas of disadvantage.

“When people are picked up by Mission Beat there are now no exits back onto the street … that has improved and affordable housing is on the [political] agenda. More people are now open to reporting domestic and family violence, and a lot has been done in the child protection space.”

As for loneliness, it can help to “go outside your comfort zone and get involved…the more you put in, the more you’ll get out of it”.

You can follow Daniel Strickland on Facebook, or visit The Man Walk to learn more about his latest initiative.

Well done again Daniel! Your such a brilliant asset to our community and our area. We are so lucky to have you.

Gerald Lynch - 12 hours ago
Not a “museum”; it’s a memorial. The Imperial War Museum doesn’t hide its purpose under any other name. If we want a... View
Gerald Lynch - 13 hours ago
The title is the “Australian War Memorial” nothing more, nothing less. Not an educational institution, not a fun park for... View
Motoring 37