Overnight mental health admissions have increased by more than 12 per cent while emergency department presentations dropped almost 18 per cent between April and June this year, according to the latest ACT health data.

The data also showed Walk-in Centre presentations fell more than 55 per cent, with almost 12,300 fewer presentations than in the preceding three months.

COVID-19 has skewed some of the figures with elective surgeries being temporarily put on hold and lockdown measures affecting hospital presentations.

The Government has allocated $30 million to clear the elective surgery backlog.

Hospital admissions were down, as were admissions via ambulances, although more than 35 per cent of patients spent more than four hours in the ACT’s public emergency departments.

“It definitely shows the impact COVID-19 has had on our health system in multiple ways,” Health Minister Rachel Stephen-Smith said.

“We have responded to [mental health presentations] by funding additional mental health beds at Calvary as well as additional support in the community through the $4.5 million package.” 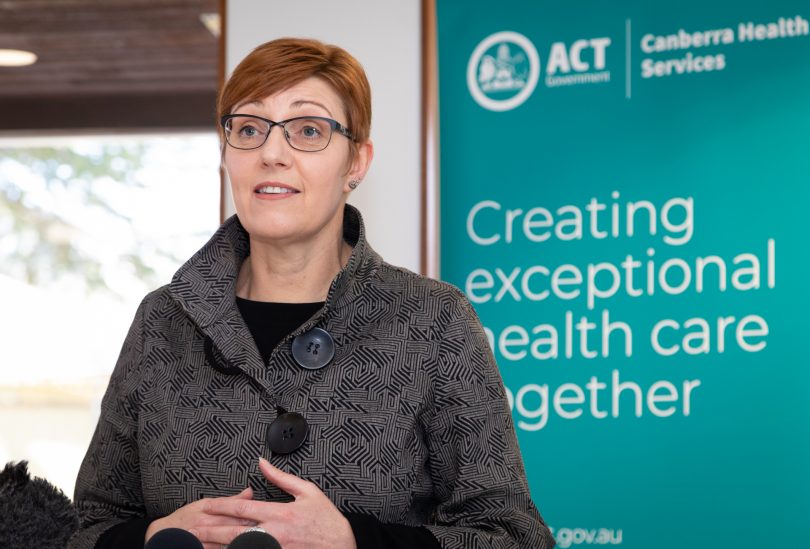 Health Minister Rachel Stephen-Smith says the health system is on track to recover following restrictions that were enacted during the pandemic. Photo: Region Media.

“One of the things I was really pleased to see was how well our staff responded to COVID-19 and when you look at the patient satisfaction rates above 90 per cent on every one of those measures which are a significant increase,” Minister Stephen-Smith said.

“It shows despite the fact that it was a time of high anxiety … and a lot of things were going on in our health system, patients were receiving absolutely outstanding care.

“Touch wood … we are on track to recover across our health system.”

Confusion reigns. People who die WITH Covid but from other causes are being counted as dying OF Covid. This distorts statistics, exagerates the true impact of Covid and creates panicked over reactions from government. Like the still unused, $35m medical facility on Garran oval.