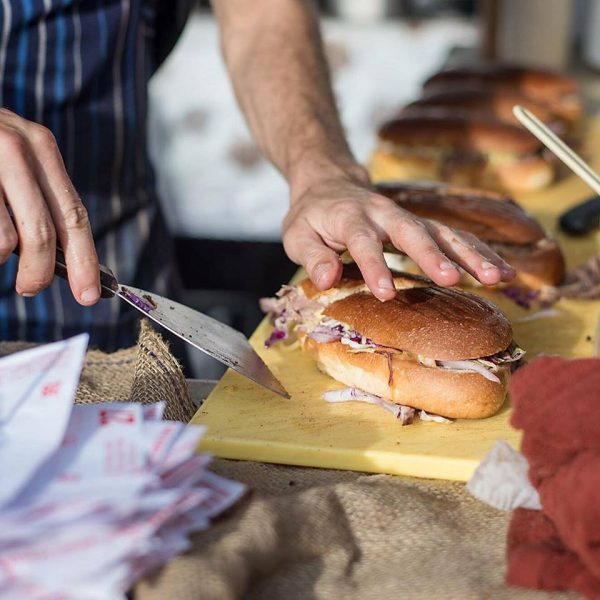 Delicious, locally-produced treats at the Forage this weekend. Photo: Supplied.

There are three interesting, locally produced plays on this weekend. The Street Theatre’s production of Lucas Hnath’s A Doll’s House Part 2 starts this Friday, and Mockingbird Theatre’s productions of The Laramie Project and The Laramie Project—Ten Years Later continue at the Canberra Rep Theatre on Friday and Saturday. The Forage is back this Saturday afternoon for its winter edition. Catch the bus from Kingston or NewActon to avoid the hassle of parking onsite. Pooch Affair is also on this Saturday – spoil that special dog in your life. Trove Canberra—a cooperative of local artists, designers and makers—is officially opening its new shopfront in Dickson this Friday night and Brumbies are playing their last home game of the regular season this Saturday.

Where: The Street Theatre
When: Friday & Saturday 7:30 pm
The Street Theatre’s latest production is the 2017 Broadway play A Doll’s House Part 2 by American playwright Lucas Hnath. The play picks up where Henrik Ibsen’s groundbreaking 1879 classic, A Doll’s House left off. Fifteen years after walking out, slamming the door on her marriage and leaving her three children behind, Nora Helman is back, knocking on that same door. But Nora is a changed woman. She has discovered her own voice and has become a writer. She is back to ask her husband Torvald to sign divorce papers. A Doll’s House Part 2 is a comedy about family, marriage, responsibility, and freedom of choice. Directed by The Street Theatre’s Artistic Director Caroline Stacey, this production features Rachel Berger as Nora and PJ Williams as Torvald. And no, you don’t need to have seen A Doll’s House to enjoy it. Tickets are $55 for adults, $50 for concession, $39 for students and $30 if you are under 30, book here. The season runs until 23 June.

Where: Trove Canberra, Dickson Place
When: 4–7 pm
Trove Canberra is celebrating its move to Dickson with a launch party this Friday night. Check out the locally produced goods, chat with local designers, artists and makers, and be immersed in creativity. There will also be nibbles and bubbles!

Where: Exhibition Park
When: 10 am–4 pm
Spend quality time with your favourite dog this Saturday at A Pooch Affair. In its fifth year, there will be a Doggie Mall featuring all the latest trends in dog gear, stage shows including Dancing with Dogs, Best Dressed Dog and Craziest Party Hat and the popular High Tea with dogs is back. There will also be obstacle and agility courses, informative presentations, a pet photo booth, and Adoption Lane. Check out the full program here.

Where: Dairy Road, Fyshwick
When: 2–7 pm
The Forage is on again this Saturday at its new location—Dairy Road, Fyshwick. The Forage showcases local food, drink and music. It aims to give local businesses an opportunity to feed the community in a festival-style environment, and the community an opportunity to come together to sample some of the best of what local businesses have to offer. To alleviate parking congestion, The Forage is running free shuttle buses from Kingston and NewActon, so you can park your car elsewhere, check out the details here. Alternatively, the Canberra Beer Runners Club is running the 3 km from the Kingston Foreshore to The Forage. Meet at 1 pm outside The Dock, more details here.

Thrown into the World

Where: GIO Stadium
When: 7:45 pm
In their final match of the 2019 Super Rugby regular season, the Brumbies are playing the Queensland Reds this Saturday night. The Brumbies have won their last six home games and intend to make it seven in a row this Saturday. Tickets from $12.25, book here.

Where: National Museum of Australia
When: 2–4 pm
The National Museum is running a series of workshops led by Indigenous artists and creatives to celebrate a new installation of fibre-art figures by the Tjanpi Desert Weavers. These figures bring life to the story of the Seven Sisters and will be on display until 4 August. The workshops are on each Sunday until 30 June and then each day during NADIOC Week and cover topics including visual and fibre arts, poetry, music and Indigenous language. This Sunday Ngunawal man, Tyronne Bell is giving an introduction to the Ngunawal language. Tickets are $65 for adults, $60 for concession and $55 for museum friends. Book here.

Demi Naylor - 5 hours ago
Well.. you know.. f they can afford a house or find one suitable to rent.. View
Julie Macklin - 6 hours ago
Marc Edwards That can made it worse for public transport. It's okay for those living nearby, but for people in other parts of... View
Kate Bee - 6 hours ago
Elizabeth Ann Thurbon I've been here 48 years and the crime rate is one of two significant excellorated changes in recent yea... View
Food & Wine 9