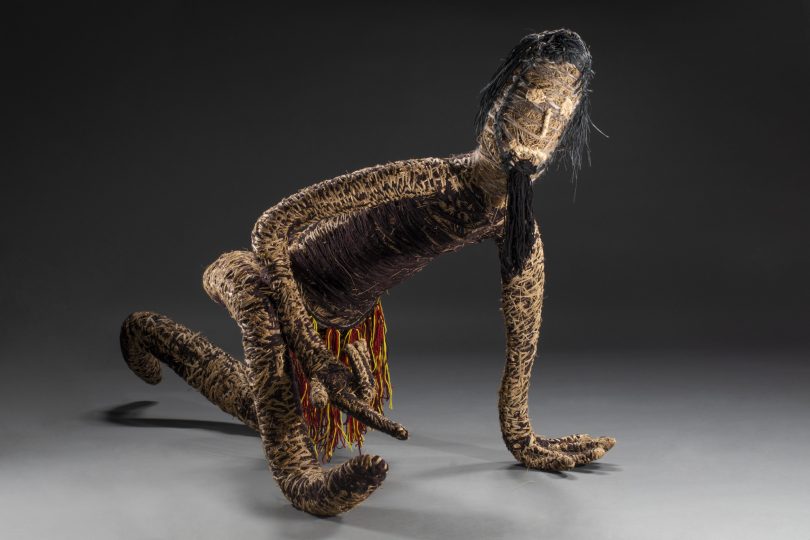 One of the life-sized figures now on display. This one is Wati Nyiru – the shape-shifter who chased the seven sisters, by Rene Kulitja. Photos: George Serras/NMA.

Specially commissioned life-sized figures woven by Indigenous artists from the remote Central and Western deserts are now on display for the first time at the National Museum of Australia before they head overseas on tour with the acclaimed Songlines: Tracking the Seven Sisters exhibition.

The National Museum says the eight life-sized figures created by the Tjanpi Desert Weavers are up to two metres high and made from a variety of traditional and modern materials. They will be the inspiration for the Museum’s next Studio: Collections Up Close series featuring a rich Indigenous arts and culture program.

Versions of the sculptures seen at the National Museum’s groundbreaking and award-winning 2017-18 Songlines: Tracking the Seven Sisters exhibition were on loan from other organisations.

Songlines, which won the ‘Best In Show’ award at the last year’s Museums and Galleries National Awards, was an Aboriginal-led exhibition that took visitors on a journey along the epic Seven Sisters Dreaming tracks, using art, Indigenous voices and innovative multimedia and other immersive displays. The Museum plans to take the exhibition on tour overseas.

The Seven Sisters songline is the story of an ancestral shape-shifter, Wati Nyiru, and the women he relentlessly pursues across the landscape. In the exhibition, the seven sisters were featured in two groups – seated and transformed into trees.

The newly acquired figures now on display are captured at the moment of the women’s magical transformation into trees to deceive their love-sick pursuer. Materials used to create the ‘tree women’ and the sinister Wati Nyiru figure include bird wire, native grass, acrylic yarn, dyed raffia and commercially treated emu feathers. 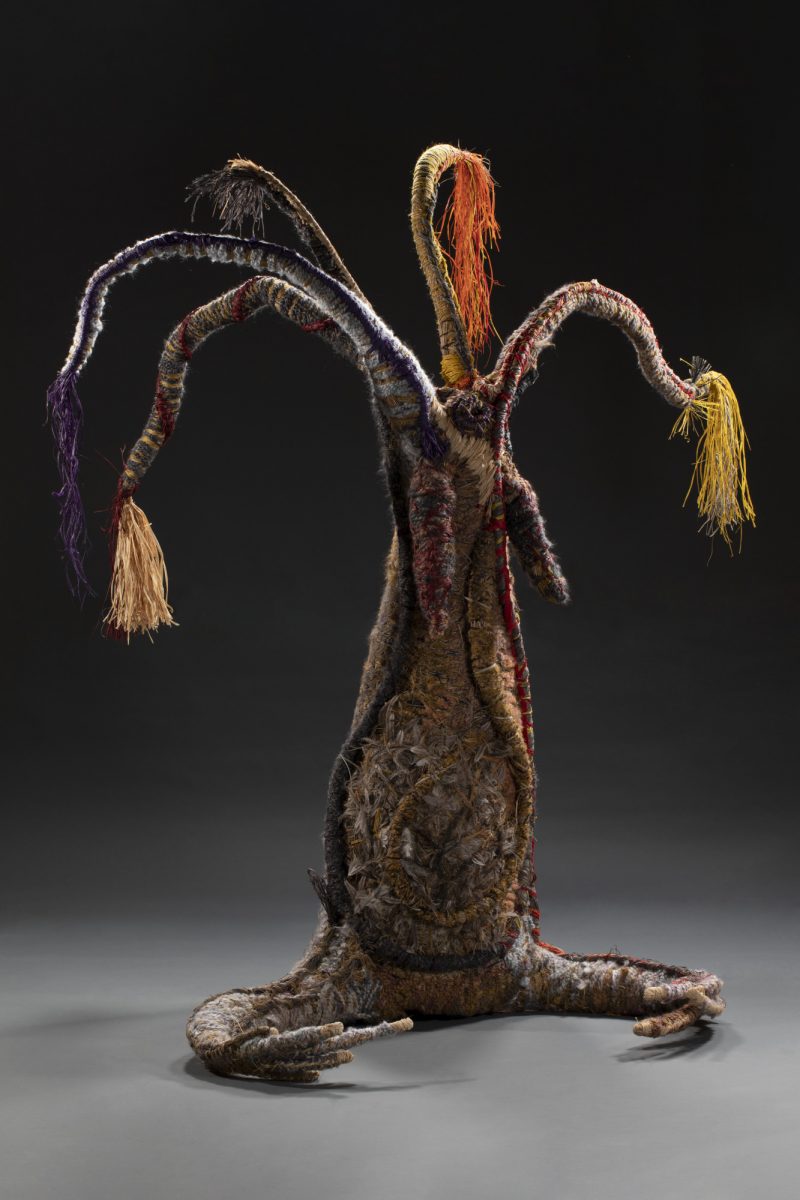 One of the ‘tree women’ created by the Tjanpi Desert Weavers. This one is by Yaritji Young.

Senior Indigenous curator and head of the National Museum of Australia’s Centre of Indigenous Knowledges, Margo Neale, said the figures would form a key element of the Songlines touring exhibition.

“This is a rare opportunity to get to know these magnificent fibre-art figures before they head overseas,” she said.

She said 15 senior and emerging women artists made the figures in 2018 on their country near Walinynga (Cave Hill), one of Central Australia’s most significant Aboriginal rock art sites.

“The figures used in the original exhibition were loan objects and by the nature of the type of material (tjanpi – desert grasses) fairly fragile. We wanted to ensure there were versions available for the lengthy touring show which would also become important and valuable acquisitions for the Museum’s permanent collection,” Ms Neale said.

The commission was an important opportunity to pass on skills and cultural knowledge as each senior artist worked with an assistant artist who was learning the craft of creating large figures.

A series of closed-gallery Indigenous arts and culture programs will be held while the ‘tree women’ are on display. They include traditional basket weaving, sun printing, poetry and storytelling, and Ngunawal language workshops.

A full list of workshops can be found here.

Ota Save - 20 minutes ago
Sue Sutton No worries Sue. Happy to help ❤️ View
Sue Sutton - 1 hour ago
My Mum has wonderful neighbours who have been helping keep her lawn in check. Thank you Ota and family xx... View
Bill Gemmell - 2 hours ago
Barbara Eglitis I was wondering how long it would take. Seriously, I had the Fowles St Park project in Weston in mind. Sugges... View
News 33

purplevh - 21 minutes ago
If a dog ever chased me on a bike I would turn around and chase it. They soon get the message when that happens.... View
purplevh - 25 minutes ago
I like your point about heavy vehicles but the same goes for a motorcycle licence BECAUSE you are the one most likely to be h... View
Opinion 13