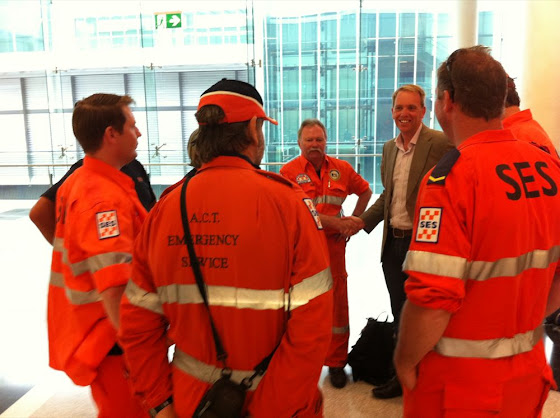 [Simon Corbell sends them off]

The 21 person deployment (20 volunteers and one staff members) will fly out of Canberra for Brisbane tomorrow morning where they will be tasked to assist with the flood response operations in the state’s capital and/or regional areas.

The task force will return to the ACT on Tuesday evening.

[Courtesy of the ESA]

Saw them heading off at the airport this morning and felt very proud of them, although a bit humble since I haven’t joined the SES or done anything meaningful to help – except the odd donation. Flew over the affected area and hard to get head around how extensive the flooded areas are, including Rocky and other almost forgotten zones.

Eric Staal - 2 hours ago
Jake Badger change is scary and bad View
Kylie Beer - 7 hours ago
Ian Hubbard Ian, I know you know that the YWCA does a lot more than childcare. The current buildings on the site haven’t be... View
Joan James - 8 hours ago
Rob Parker my thoughts too! View
News 51

William Coats - 12 hours ago
Lee McDowall and he personally probably wont face the people again. It is good of the union not to strike until the week afte... View
William Coats - 12 hours ago
Nathan, The ACT is run as a union town, unless we complain nothing will be done. "fix my street" is the perfect example, why... View
chewy14 - 17 hours ago
The whole point is that developers have worn the costs of their proposals based on the current land use and policies in place... View
News 52

Jaala Hamilton - 13 hours ago
Loris Manns couldn’t agree more! View
Lisa Bishop - 14 hours ago
Inmates should be made to contribute to their keep. Get them outside building and planting out vegetable gardens etc View
Breaking 4

JessP - 15 hours ago
Went over Evatt, low and loud! View
show more show less
*Results are based on activity within last 7 days

@The_RiotACT @The_RiotACT
'With One Voice' is starting its second Canberra choir and they're inviting everyone to have a go at a workshop Wednesday night in Gungahlin https://t.co/AA21xBsz1w (7 hours ago)

@The_RiotACT @The_RiotACT
Proud parents of adopted RSPCA animals share how their COVID-lives have been enhanced with their new forever friends https://t.co/gpmCbdgwat (8 hours ago)

@The_RiotACT @The_RiotACT
Hot in the City: Good Brother in Dickson has found its brojo & hit its stride https://t.co/5RhiSdyq6H (9 hours ago)