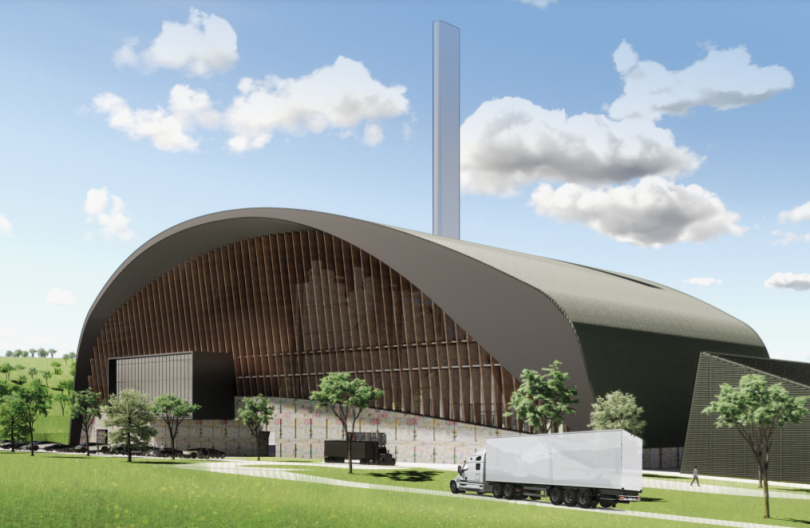 An artist’s impression of the proposed Tarago incinerator, or the Advanced Energy Recovery Centre. Photo: Veolia.

Impassioned residents strongly opposed to a $600 million waste incinerator planned for 35 km from the ACT’s border are calling on the ACT Government to help put a stop to the project.

Although the facility would be built in Tarago, they say it’s not only a NSW problem as computer modelling and plume potting shows the plume of emissions and particles would regularly blow across Lake George and into North Canberra suburbs.

Communities Against Tarago spokesperson Paige Davis says locals feel as though those in Sydney who are making decisions think the area is “some kind of desert” when in fact it’s a thriving area that will only grow as Canberra pushes out.

Ms Davis says the region’s drinking water, which is collected from roofs, would be at risk, as would all the agricultural activity.

“People like to think this is just our problem, but that’s far from the truth. The plume on any given day could go to Goulburn, Collector, Bungendore and to Canberra,” she explains.

The proposed incinerator, to be built by Veolia, would burn around 380,000 t of Sydney’s waste each year and operate 24 hours a day.

It would be built on the company’s existing Woodlawn landfill and bio-reactor site, which already causes a literal stink for residents like Ms Davis.

“I have smelled that on a daily basis for over 10 years now,” she says.

Currently, the multinational company is preparing an environmental impact statement for the NSW Government.

The ACT Government has already banned waste-to-energy incineration, Ms Davis notes and recently agreed to look into legislating for the right to a healthy environment, which is why Communities Against Tarago sees it as an ally.

“The proposed incinerator jeopardises these moves to protect Canberrans from climate change and ensure everyone can access clean air, water, healthy food and nature,” the group’s petition reads.

Ms Davis says there is already a group of Canberrans concerned about the proposal.

“We believe the ACT Government doesn’t really understand the proximity and the real possibilities for increased [emissions] … the reality is it doesn’t respect borders,” she explains.

Furthermore, it calls on the Territory Government to liaise with NSW Government counterparts and conduct an awareness campaign to ensure Canberrans are informed and know how to object.

At a public QPRC public meeting earlier this year, several community members spoke about their fears for the future should the project be allowed to go ahead.

Some spoke of fears for their health and that of their children.

The community group against the project is hoping to get even more local councils on board but the end goal is completely stopping it from ever going ahead.

A spokesperson for Veolia previously told Region Media that energy from waste technology is globally proven to be safe and more sustainable than landfilling.

“The NSW Government has set the highest health, environmental and operational standards in the world for this technology and they will only approve projects that can meet them. There will be no unsafe impact on local communities and this will be verified in the Environmental Impact Statement.”
Share this article

I can find references to the local councils and governments of Goulburn, Yass and Tarago all speaking out in opposition to the massive garbage incinerator proposed to be built near Tarago. There is a deafening silence from the Canberra Green/Labor Government…

The toxic smoke will blow over Canberra, in fact that is the plan. The incinerator is planned to only operate with winds blowing over the lake so that larger particulate matter falls into lake George. This will cover north Canberra with the toxic smoke of Sydney’s Garbage.

The Canberra Green/Labor Government so committed to reducing climate change that they built a billion dollar train ride to the north. But are happy to see and breath in the burning garbage from Sydney.

Where does the Canberra Green/Labor Government stand on this? Why are they so quiet?

I am surprised that the virtue signalling Canberra government didn’t do the same as the project is classed as a renewable energy one.

They all say there’s no threat to the community until there is. Too late when we all start getting horribly sick. Sydney make th es rubbish, they can keep it there

Is this a traditional incinerator or plasma arc gasification facility? Curious about the technology used and the decision for technology selection.

The NIMBY’s know no bounds in to the stuff they will make up to prevent something they don’t like.

Anyone that’s looked at the evidence against this proposal being presented by these groups should see how flimsy it is.

Why even have regulatory emissions limits if proposals can still be shut down by whinging locals.

The apparent “maps” of emission plumes that they are promoting actually show there is very little impact. If you want to, the plumes can be expanded to go on forever even though that doesn’t occur in reality. However, it’s the emissions concentrations that matter.

Infrastructure to server Canberra. They should build it soon and do up the rail line while their at it.

Canberra – CAN BE poweRed by neighbouRs wAste.

You have to laugh.
They want Australia to reduce emissions, yet they have no qualms about China or others increasing their output.
Take heed of the headline.
“Emissions don’t stop at borders”…..

And those same residents do not care about their own emissions and particles from backyard and rural burning, which are worse than modern incinerators.

Robert Downs back yard incinerators aren’t permitted in the ACT for that very reason, so any fallout from the proposed large commercial incinerator has the potential to add pollution that we don’t currently have, if not managed properly.

Joan Swan Tarago residents. There are notices for people burning piles all the time in the local community group and those kinds of burns have a far greater release of toxic chemicals and particulates. These get totally ignored though.

Joan Swan Even wood fires which are still permitted in the ACT are extremely polluting. They would very likely be the single largest source of pollution in the territory. The incinerator would not even be detectable above their pollution.

Robert Downs I understand that and agree, which is why the ACT have laws to prevent it. It still stands that any pollution coming over the ACT (as suggested) from the commercial plant at Tarago, will create more pollution than what we currently have here.

Joan Swan The number of new wood fires being installed each year in the ACT will dwarf even the most dire and made up predictions of pollution from this incinerator. These plants exist across the world and in capital cities with no issues. There is one in the middle of Tokyo.

Robert Downs There’s also one within a few miles of the heart of London. No problems with that. You go right past in on the train and you can’t even tell if it’s burning or not.

Robert Downs wood fires and pile burns burn wood only generally. This thing will be used to burn everything. Massive difference. They do exist across the world they are also starting to see the build up of toxins around these plants.

Robert Downs as the EPA said there is no safe level of emission. Why don’t they put time and effort into putting it back on manufacturers to use recycled packaging. This in turn would eliminate the need for incinerators. In some states in the US they have created legislation to promote a circular economy. Far better to recycle than to burn.

Daniel Ciccarone Again wrong. This will burn certain types of waste only. Controlled high temperature burning of the materials allowed to be burned in these incinerators is safer than open burning of wood any day of the week. Got evidence of the build up of toxins?

Robert, there are government programs currently in the ACT to remove wood fires and prohibit new wood fires being installed. Most new suburbs wood fires are banned.

Leigh Brady And yet more wood fires are installed each year than are removed. Maybe you should also learn what you are talking about too.

Tarago and surrounds already experiences noxious gases (stinks) from the “bio-reactor” (rotting garbage). Trainloads of rubbish are brought in from Sydney every day, and now they want to burn it.

The map of how far the smoke and particles will spread is scary, and includes much of the populated part of the ACT.

Anthea Kerrison There will be no smoke, maybe learn about how it works before commenting?

Paul Vohradsky Notice how I said there is “no smoke” but you said “no smoke or by product”? See how those are different? It could be built in Sydney, but the waste already comes to this location by train though so would be no changes to how it is transported.

Robert Downs Ah, the “getting off on a technicality” ruse. Well, now I’m convinced! It’s completely without ill effects. So why do they transport it all the way to Tarago rather than processing it locally?

Anthea Kerrison Because the transport links already exists to Tarago and there was no where in Sydney to handle the amount of waste for landfill. You claiming there is smoke just shows you do not understand how modern incinerators work and undermines anything else you claim. Not a technicality at all.

Anthea Kerrison it’s brought there cos the brought the site for pennys. The site was a Massive open cut mine. Used now to dispose of rubbish, which they have been harvesting methane off and producing energy for years.

Robert Downs So how does it work? Burning, incinerating rubbish according to the laws of physics must release Carbon and other greenhouse gases and contaminates.

Dave Cavill Greenhouse gasses yes, but less so than the same waste going to landfill. So right away there is a net benefit to climate change. Other contaminates are kept to safe levels as per the very strict emissions laws that have recently been updated by the EPA.

Rattenbury and Barr live in the north Canberra suburbs so it would be poetic justice to see this project proceed and regular fugitive emission plumes touching down in Braddon for them to savour given that they continually deny there are any emissions coming from the MLRMC.

How exactly do you think a “fugitive emissions plume” from an industrial incinerator is going to “touch down” in Braddon?

And here I was thinking if anyone would be an expert on hot air, it would be CR.