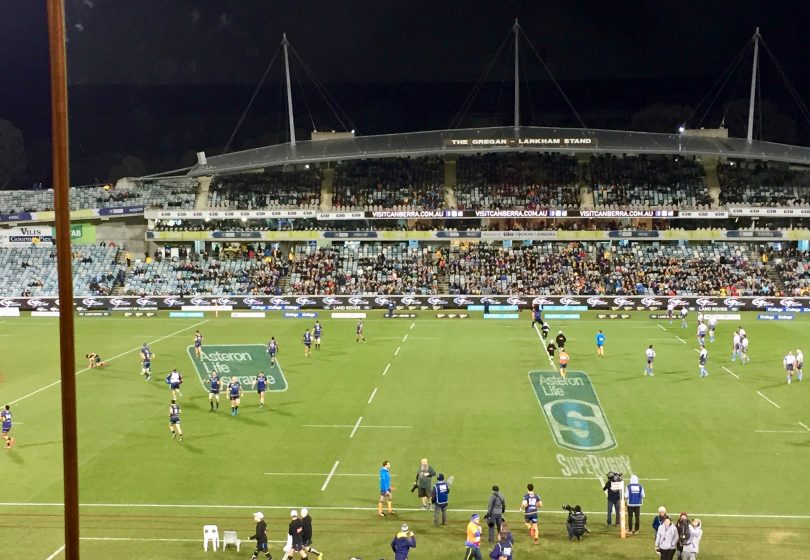 Exhibition Park in Mitchell is being actively considered as a potential site for a new city stadium to replace the Bruce facility, according to the ACT Government’s Infrastructure Plan launched on Thursday.

Speculation about an alternative rectangular sports and entertainment arena to the 25,000 seat Commonwealth-owned Canberra Stadium has centred on the existing Civic Pool site on Constitution Avenue. However, the Infrastructure Plan says EPIC’s location on the light rail line and the availability of larger available sites among the 77 hectares of outdoor space may make it a more viable option.

It says the pool site’s advantages include its connection to the city centre, but it may not be big enough and traffic issues may limit its feasibility.

Chief Minister Andrew Barr says that while a stadium in town might be ideal it will not fit on the pool site without moving Parkes Way, which requires Commonwealth approval.

He said an easier build might be at Bruce or at EPIC, which the Government had committed to revitalising. “You can drop a stadium into an existing precinct or you can build a precinct around it,” he said.

The plan says it may be better to co-locate a new stadium with other exhibition and community facilities at EPIC.

There has been intense lobbying for a new all-weather state-of-the-art city stadium to be built in a more convenient location than Bruce, and one that fits into a modern entertainment context. 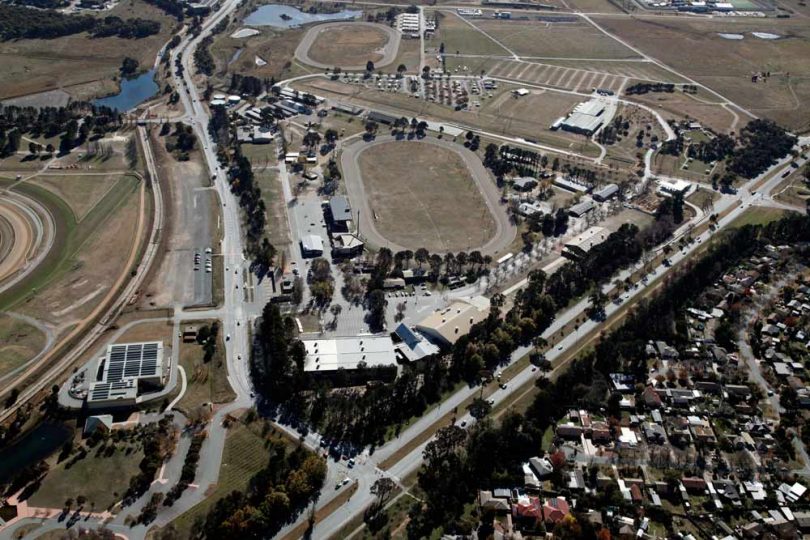 Exhibition Park: the Government is eyeing its open spaces for a new stadium site. File photo

Crowds at Raiders and Brumbies games in the deep of winter are falling as fans opt for the more comfortable surroundings of the big screens at clubs, pubs and home, rather than huddle together at the partially uncovered stadium at Bruce.

The Government has started scoping work on Canberra’s needs for a rectangular stadium beyond the 2020s capable of hosting domestic and international rugby league, rugby union and soccer games, as well as stage major concerts.

The plan says a new stadium would likely require a seating capacity of around 25,000, be compact enough to allow spectators to get up close to the action, support year-round use and have good access to public transport and parking.

The Government could also stick with the Bruce site, saying that it has an ample footprint for a new stadium.

But the plan says it is not well enough connected with existing retail and commercial precincts and there are limited facilities for efficient use of public transport. The ACT Government would also need to either purchase the site from the Commonwealth Government or enter into some other kind of land-use arrangement, it says.

Any decision will hinge on whether the Commonwealth opts to sell or redevelop the Bruce site, both of which it said this year it was considering.

The Government is not saying how a new stadium would be paid for, whether it be funded directly or in partnership with the private sector, but it will be behind the new Canberra Theatre Centre in the culture queue. The Theatre Centre is expected to be developed within the next five years.

Mr Barr said the Bruce stadium, though imperfect, was still adequate and would suffice until the mid-2020s. The only way for it to be fast-tracked would for an investor to come forward with a viable proposal.

The Infrastructure Plan commits to maintaining EPIC as Canberra’s ‘pre-eminent large format event space’ in the years ahead, which will be a relief to the Canberra Show and other big users such as the National Folk Festival.

As well as a new Canberra Stadium, the Government is looking at upgraded facilities to support major events like the Canberra Show, a large-scale venue suitable for hosting multicultural and other community events, and education and sports facilities supporting the growing Gungahlin region.

It is planning to spend $50 million there over the next five years and up to double that in the long term.

Hmm, the civic pool site will be serviced by the two main tram lines – not one. It hold also bring people and business to the ‘dead end’ of civic. Also for people south of the lake EPIC is more difficult than Bruce

What are you going
on about now?
What Beers, Sat, as in Urn or even Venus.

ACT Govt needs to promote global warming so it’s not so cold at Bruce Stadium during footy season.

Ben Hoitink . We’ll all be retired or dead and buried before anything happens

Do up the stadium that we already have

Janet Smith it’s rubbish! We are the capital- we need a top stadium for a top city!

Given that a decent concert has a noise radius of roughly 25km, it doesn’t really matter where it goes in that regard…I remember hearing Tina Turner belt in a prime concert stadium…while standing in the garden, about the said 20-25km away 🙂 I found that rather cool – as a kid;-)

Is this the Govt’s consultation process? It needs to be in the city as Christopher Fridge Butler says. This time round, give southside a thought.

Vickie O’Malley I agree no one cares about what the southsiders want on principle I refuse to go to a Stadium built in Epic it’s got to be in the City.

Stupid idea! Needs to be in the City!

Gotta be in the city.

If it’s not in the city don’t bother.

Build it like Sapporo Dome as a multi-purpose facility.
Even during brutal Hokkaido winters the grass remains outside until it is needed. This ensures good growth in the sunshine and protects it from damage during concerts and other activities.
Brumbies, Raiders, Cavalry, etc. could all use it. https://youtu.be/dS-sHNDosHA

What an absolutely stupid suggestion.

And what will happen to the events that are held there now?

I’m not sure City means what the Government thinks it means!

They have the land

Look to SUNCORP as a model for location and supporting that location. Zero parking around, but underground access for dedicated buses (which are free for sporting events), close enough to rail and with Caxton st for the adults and the city for families it is a great location. Seating means even nose bleeds are good seats and if we put a roof on CBRs it would be fantastic all year round. Noise must be the next consideration though as that has been the limitation for SUNCORP in previous years.

Trace Hawker really? There already are free buses to the footy at Bruce.

Trace Hawker there are already free buses to every game

Jon Billows the busses are part of your ticket! They’re not free.

Nikko Corrigan so why are you catching the bus to the game without a ticket?

What’s wrong with the one we have? Is it being used enough? Feels like they’ll bring one up and put the other down… Just give them half reason…

its run down and nowhere near the standard required. Only a complete rebuild would fix the age issue and that doesn’t solve the issue of the terrible location

It was built in the 1970s and maintenance is getting to the point that a new stadium is better use of money, than spending it on an old stadium just to keep it useable.

re: location… I can’t see why the location is bad. Accessible thru Gungahlin and Ginninderra Dr. Anywhere it’ll be the same thing. These events bring people, not the other way around. Having it in the middle of the city so people can walk when it’s event day, is silly, it’ll overcrowd an overcrowded area. Airports, Stadiums, these are supposed to be built out there…

re: 1970. please don’t be silly… otherwise we’ll have to put down 90% of the major stadiums around the world.

Vander Leal Stadiums are being pulled down or redeveloped on their current site….

Vander Leal so where do you go out for dinner at bruce? Where do you go to have a drink with mates before and after? Where do you take the kids beforehand? What is there to do? Modern sport is an event. You don’t just go for the game you make a night of it. There needs to be more appeal than just the game

Name me another stadium in Australia which is older and yet to be completely rebuilt or replaced?

Vander Leal the city is overcrowded? Well bugger me.

Should keep Epic where it is and build the stadium opposite, there the Giddy up’s are. Give the giddy ups and harness a new site somewhere else in the city on a greenfields site (there is no obvious reason why they need to be on such prime land – after all, outside of the big race day or two a year, no one goes) to build a purpose built facility for each, then use that huge site for a new stadium, and develop the rest….

As long as it does not destroy Summernats, The National Folk Festival and still allows camping, horses and cattle, then all right then.