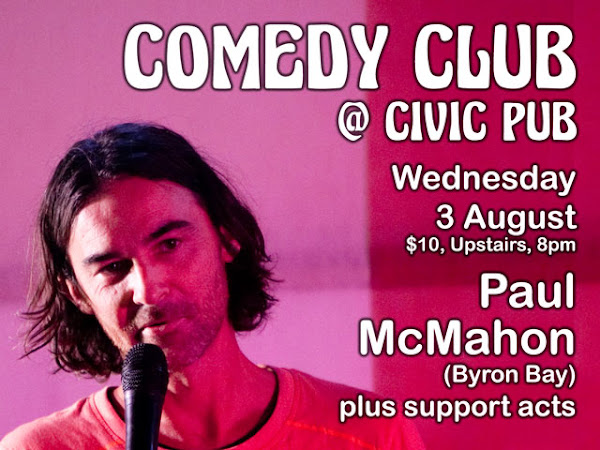 Paul has been performing stand-up since 2008 and has grown in confidence and gained success with his laid back style of observational humour that we can all relate to. He has been a Triple J RAW comedy QLD state finalist two years in a row and was winner of the 2010 ‘Village Idiot’ comedy competition at the Bangalow Big Joke comedy festival.

Paul also works for BayFM community radio in Byron Bay and is now in his fourth season of hosting the highly successful “Not the comedy show” which has gained a huge following on the North coast of NSW. Paul has been the regular host of open mic comedy at The Buddha Bar on Byron bay and has performed alongside, Tommy Dean, Steady Eddie, Axis of Awesome and once shared a taxi with a guy that looked a bit like Akmal.

Paul is the polite, quietly spoken guy next door who says what he really thinks on stage. Fathers, girlfriends, friends, shopkeepers, in fact everyone will be able to relate to Paul’s easy going nature and hilarious perspective on life as a single dad living in a small country town.

Tom Gibson will be hosting the evening, with performances also by Emo Parsonson, Hamish Hudson, and Paddy Hornby.

As an up and coming comic to watch on the circuit, Paul McMahon has a knack for observation. In a world of comedy where sometimes it feels that everything has been said, Paul is able to go in and come up with fresh ideas. He’s unobtrusively laid back on stage, and is capable of taking the audience by the short and curlies with a killer punch line. Paul McMahon is a funny bloke. Watch out for him. Mandy Nolan

F**k that was good! Dave O’Neil

Gregg Heldon - 44 minutes ago
Margaret Dudley I hope not but...... View
Stuart McKay - 1 hour ago
Ian Bushnell has thrown the toys out of the cot again, sigh Brad Clarke View
Joseph Stubbs - 1 hour ago
Here's a look at what you get when you go to ACT Labors 2020 Election Policies page. Though, to be fair, elsewhere on their s... View
Property 46

Allan AJ - 1 hour ago
Scott Lang you should of knuckled down early on and bought in your 20’s not try to start doing it in your 40’s. View
Jp Romano - 2 hours ago
Margaret Welsh you’re wrong. Shadow me your facts. View
Scott Lang - 4 hours ago
Allan AJ , perhaps you are right. But I'd be looking for something at half that price. Unlike the older generation, I have to... View
Opinion 19

Phạm Quới-Chi - 14 hours ago
We spotted not just one , but three black cockatoos in Isabella Plains 😍 View
David Ironside - 17 hours ago
Tracey Ironside yes there a few around Fadden recently View
Sandy Gibbs - 17 hours ago
Kathy Little Suzy Obsivac these are the ones we saw on our walk today. Timely article!... View
Opinion 1

Jeremy Calero - 21 hours ago
Kaitlyn nothing will stop it lol View
O L - 23 hours ago
Wonder what that means for rental longer term? Probably go up after covid to match increase in housing values View
Community 12

O L - 23 hours ago
HECS gets paid only when you earn enough money to pay it back. What’s the problem with that? Fair system and I had no issue... View
News 6

O L - 23 hours ago
Great, that means little to no federal funding coming our way View
Annie Mills - 23 hours ago
Ben Winkler I have a sneaking suspicion that people in the bushfire affected areas are so desperate for the help they have be... View
show more show less
*Results are based on activity within last 7 days

@The_RiotACT @The_RiotACT
Work at Canberra Hospital? Canberra Health Services has lodged plans for a temporary 1100 space staff car park on the site of the former Woden CIT to service the hospital while it undergoes major infrastructure works over the next four years https://t.co/a1xcG1rZsO (37 minutes ago)