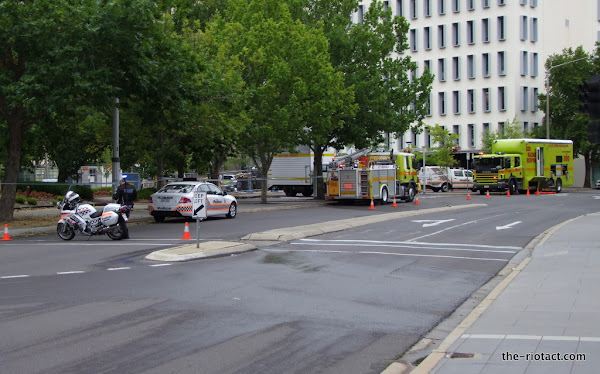 Word on the street is there’s been an explosion at Canberra House.

We’ll update you when we hear more.

ACT Fire & Rescue on scene at the Canberra House building on Marcus Clarke Street, City, investigating a light fitting which has been ruptured.

Approx 60 staff from level eight of the building have been evacuated as a precaution whilst crews carry out investigations.

Light was ruptured during maintenance work.

ACT Fire & Rescue conducting clean-up activities of a small spill from a ballast of a light fitting.

Occupants of level eight expected to return to the area by 12.30pm. The remainder of the building is unaffected.

ACT Ambulance Service intensive care paramedics have treated two male patients, aged in their 30’s, for possible chemical exposure and taken to The Canberra Hospital in a stable condition for further assessment.

Occupants of level eight are now due to return to the area at approximately 2pm.

Level eight of the building will now remain closed to staff for the remainder of the day.

The rest of the building is unaffected.

How many emergency service personnel does it take to change a light blub?

So these are the same type of PCBs that were in the mitchel fire.. yet only a fraction of them?

“If the ballast does contain PCBs, they are located inside the small capacitor or in the surrounding potting material. There would be approximately 1 to 1½ ounces of PCBs in the capacitor itself and lower levels in the potting compound, a black, tar-like substance that encapsulates the internal electrical components. Leaks of PCBs from ballasts typically take two forms: a clear to yellow oily liquid, the PCB oil itself, or the liquefied potting material. If the ballast fails or overheats, the capacitor may break open and both its oil and the potting material may be released from the fixture. The capacitor does not always leak when the ballast fails, but measures should be taken to limit or avoid personal exposure in all cases.”

For the workers in the building, this is something:
“Most of us have very low levels of PCBs in our bodies from long term exposure that have built up over time. Although PCBs are highly toxic, few of us suffer any known health consequences as a result because the levels in our bodies are very low. Because of the risks posed by PCBs, they were banned from production by Congress in 1977. However, we all continue to be exposed to PCBs, through eating food and from breathing indoor air and coming into skin contact with dirt and dust. The generally small amounts of PCBs to which we are exposed each day build up over time in our bodies. These small daily increments accumulate over years leading to a long term “body burden” of PCBs. It is this accumulated body burden of PCBs that is important in understanding potential health effects, rather than individual higher or lower daily doses. Learn more about the health effects of PCBs.

The most likely way that people may become exposed to PCBs from light ballasts is through breathing PCB-contaminated air or touching PCB oil or PCB-contaminated materials after a ballast leak or fire.”

This makes the news today because there was a loud sound, but the exposure is actually constant and cumulative.

“Two men have been sprayed with oil containing PCB chemicals and about 60 people have been evacuated from a Civic office building after a light fitting ruptured this morning.”

PCBs (or suspected) from the light fitting, apparently.

Fair chance it will be PCB from a capacitor. A lot of old buildings still have light fittings with this nasty carcinogen.
http://en.wikipedia.org/wiki/Polychlorinated_biphenyl

looks like it is chemical related – little wading pool out the front, hazchem etc.

Caroline Loffler - 41 minutes ago
Darren Loffler lucky you got out when you did View
Allan Evans - 1 hour ago
Tim Primmer They are keeping their print and digital editions separate. If you are a long term paper subscriber you are not p... View
Tim Primmer - 2 hours ago
It was a ploy by the owner to shut it down.. Hope he has the money to pay out redundancy and long service leave.. View
News 2

Matt Sposito - 2 hours ago
Sending their guys interstate with buckets of junk...... Should have just sent personel amd found trucks for them. I believe... View
Mario Vozella - 3 hours ago
Disgraceful, cost cutting has caught up with governments now, this fire escalated very quickly that day, people madly trying... View
Sport 18

Spiral - 11 hours ago
ACT Labor has been in power so long that problems like this are their fault, aided by the Greens who have helped them keep po... View
show more show less
*Results are based on activity within last 7 days