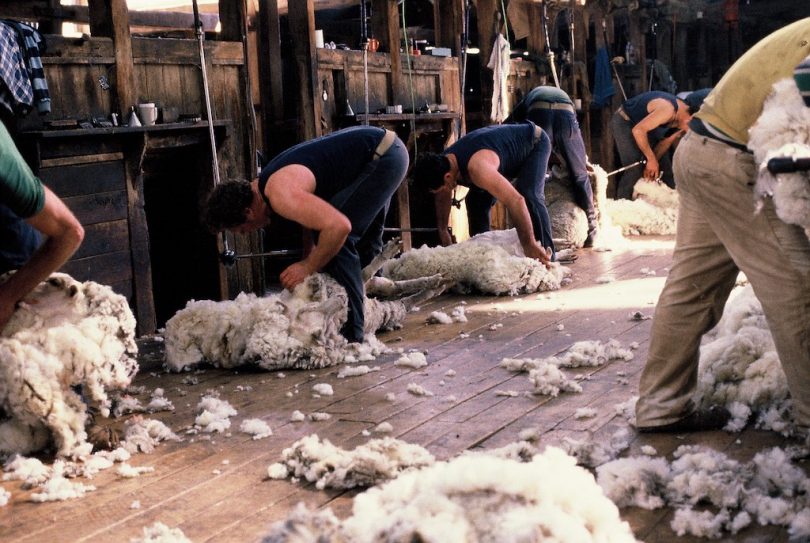 Conditions in many shearing sheds have not improved since this photograph was taken several years ago. Photo: Ray Sherman.

Dangerous working conditions, poor pay and old, dirty living quarters are causing shearers to leave the wool industry. Farmers have ignored the problems and now they face a crisis. Sheep are dying from fly strike, while shed hands, shearers and their contractors are disgusted.

Those workers on the frontline say they camp out in filthy, broken down shacks, sleep on old mattresses and earn little return for backbreaking work in old, noisy shearing sheds with dangerous equipment.

Consequently, NSW has such a dire shortage of shearers that an animal welfare problem threatens to break out in the next peak November-December shearing season.

Andy Duggan, a contractor who provides shearing teams to farmers in central and southern NSW, is warning the breaking of the drought coupled with COVID-19 has accelerated problems.

Seven million sheep are now coming to the eastern states from drought-stricken areas in Western Australia, which will make conditions much worse. Farmers are already falling behind shearing, and sheep are becoming fly-blown – infected with maggots – because they have not been crutched or shorn.

A shearer since he was 17, and a contractor for 30 years, Andy’s Christmas was his worst ever because of being unable to meet farmers’ urgent call for shearers. Farmers have been on the phone on the brink of tears.

But Andy says they have themselves to blame. He has seen appalling living conditions for his team on one farm with a $50 million turnover.

“The industry is not talking about the issue,” he says. “Farmers have to be educated, and they need to listen. They have had three years of drought, and now they have had their biggest [most successful] year. As soon as they are cashed up, they will be buying sheep. Who is going to shear them?”

Andy has lifted his pay rates by 13 per cent, from $3.25 per sheep to $3.70 a head to attract shearers. He expects pay rates will continue rising, but it may not be enough.

“I’ve shorn for 25 years,” he says. “We [contractors] do all the hard graft. We teach the young fellas how to shear, and I do everything by the book, but the cash economy is against us. Farmers offer them [shearers] cash and we lose them after doing all the hard yards.”

The crisis has been brewing long before COVID-19 stopped the influx of New Zealand shearers into Australia. Andy’s team shore 20,000 sheep just last week, but he says it was a waste of time looking for extra shearers “because they are not there”.

Region Media contacted NSW Farmers twice looking for the farmers’ side of the story, but has not had a response.

Andy says farmers who have updated their shearer conditions are the exception.

Shearing Contractors’ Association of Australia spokesman Jason Letchford says during the past decade the number of shearers has fallen by more than 30 per cent. Young people are leaving for mining, construction and other occupations.

“If [farmers] are still asking questions using the word minimum for rates of pay or working conditions, they are missing the point,” he says. “The question farmers need to ask is, ‘How good do I need to make my work environment to attract shearers here?’ Because money is only going to be part of it.

“People are looking at how fast their broadband is for a shed, not, ‘Do I need a flushing toilet?’ I am still getting flushing toilet questions, and even ones such as, ‘Do we actually need a toilet?’

“One hundred per cent of our shed staff are females, and 97 per cent of our shearers are male. But in some cases, they [farmers] are still expecting ladies to go and pee behind a tree because they are only there for two or three days and they cannot be bothered to hire a portable toilet.

“Why wouldn’t you work at IGA, or as a forklift driver, or packing shelves, or going home everyday to Foxtel and seeing your wife and kids and seeing them play sport or playing sport yourself?”

Farmers need safer working sheds, with fully guarded machinery, otherwise contractors will not bring their teams to the property.

“Farmers who don’t upgrade will fall to the back of the queue,” says Jason. “Farmers who have invested in good conditions will be rewarded. This is our year to raise standards through not operating in workplaces where there are sub-standard, deafening conditions.”

I was shearing in the 1980’s and we where talking about how bad the conditions where then and nothing has really changed.