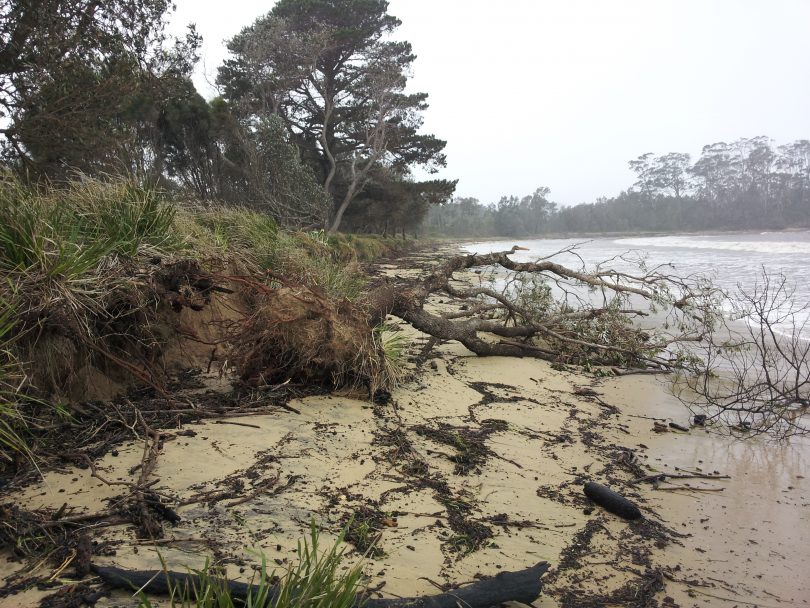 There are community concerns that if a plan to protect the coast at Batemans Bay’s Surfside and northern shore is not developed quickly, the area could suffer heavy damage from erosion.

“If you have a combination of a king tide, an eastern low and very heavy rainfall in the Clyde catchment, much of the suburb could just be washed into the sea,” said Eurobodalla Coast Alliance (ECA) president Russell Schneider AM.

“For the people who live at Surfside, it’s a distressing and concerning experience.”

Mr Schneider said the Surfside coast is currently eroding significantly and has already lost at least five metres of beach.

He is urging Eurobodalla Shire Council to fast-track development of a coastal management plan to protect the region from storms and erosion. In a letter to council, he said the plan should be given the highest priority given the knowledge that Surfside faces “a clear and present danger”. 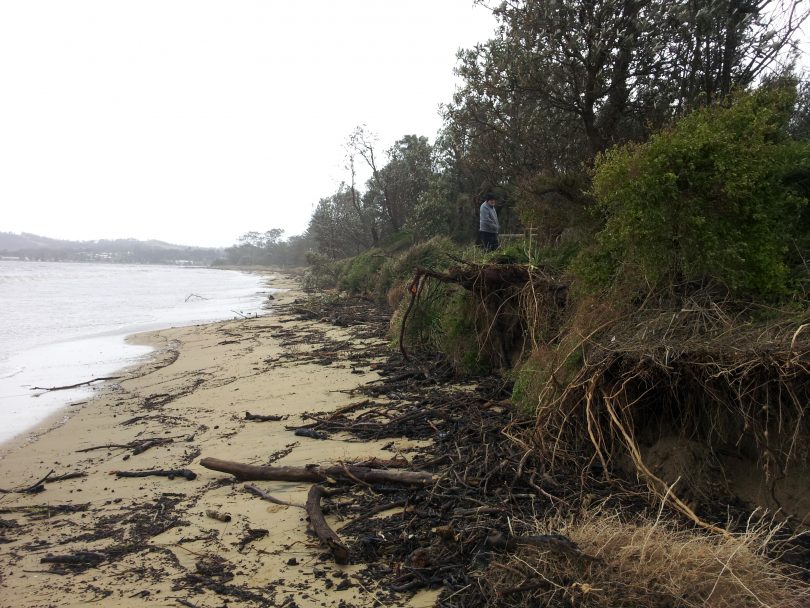 Mr Schneider is critical of how long it has taken local and state governments to find a solution to the issue.

In February 2019, Member for Bega Andrew Constance and then NSW Minister for the Environment Gabrielle Upton announced up to $5 million had been reserved by the NSW Government to tackle erosion along the Batemans Bay waterfront, with Ms Upton saying an immediate grant of $250,000 would be provided to fund an urgent options study.

“This is an issue that needs to be fixed and the RMS [NSW Roads and Maritime Services], Crown Lands, engineering company GHD, the Office of Environment and Heritage, and the Department of Planning, Industry and Environment have been brought together to do just that,” said Mr Constance at the time.

“They will look at possible engineering solutions, including a proposed sea wall at Wharf Road, as well as additional community engagement.”

On Tuesday, 2 February, Mr Constance said a coastal management plan had to be undertaken and engineering solutions identified before the $5 million could be utilised.

“The money has been allocated towards an engineering solution,” he said.

A Eurobodalla Shire Council spokesperson agreed that Surfside beach was inherently vulnerable to coastal erosion and inundation “partially due to a low dune height and low dune building capacity”.

The spokesperson said council is currently undertaking a review of its hazard lines through the Open Coast Coastal Management Program (CMP).

“This will enable council and the community to better determine the nature of the coastal erosion hazards present at Surfside, as well as the other areas of coastal vulnerability along the open coast of Eurobodalla,” said the spokesperson.

“Council has recently appointed engineering consultants Rhelm and Baird through a competitive tender process to finalise the Open Coast CMP.

“The consultants are looking to begin preparing the scoping study – the first stage of the CMP process – in February 2021.

“The CMP process will involve significant community consultation and involvement with the relevant government agencies, and will comply with the requirements of the coastal management manual and the Coastal Management Act.”

The spokesperson said the CMP will hopefully be completed by mid-2022.

However, in Mr Schneider’s letter to council, he said the ECA believes it is “totally unacceptable” for Surfside residents to be left with ongoing uncertainty about when, or whether, they will be protected. He requested a report on the coastal management plan be provided to the community by the end of April 2021.

In response to the letter, Eurobodalla Shire Council’s general manager, Dr Catherine Dale, said it was “unrealistic” to provide a report in that timeframe and noted council had not been directly responsible for the delays in preparing the report.

“Reforms in coastal legislation and the requests for additional studies and community consultation to progress the Open Coast CMP have played a significant role in the delay in progressing the CMP,” she said.

“Ongoing opposition to the Open Coast CMP has resulted in further delays, which has exacerbated the uncertainty for property owners in Surfside and other coastal areas in the Eurobodalla.”