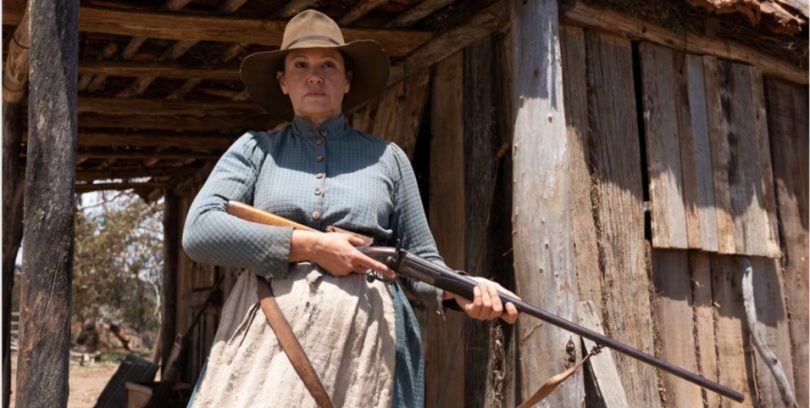 Leah Purcell’s The Drover’s Wife: The Legend of Molly Johnson was filmed in the Snowy Mountains in 2019 and will premiere at the prestigious South by Southwest festival in the US in March 2021. Photo: Oombarra Productions.

A feature film shot in Adaminaby, the Snowy Mountains, the Monaro plains and western Sydney in 2019 is to have its world premiere at the prestigious South by Southwest (SXSW) festival in the US, to be held ‘virtually’ in March 2021.

SXSW, held in the city of Austin, Texas, is an annual film, music and digital festival that celebrates raw innovation and emerging talent from in front of the camera and behind it.

Leah Purcell’s The Drover’s Wife: The Legend of Molly Johnson will premiere in the festival’s Narrative Spotlight section, for high-profile features having their North American or world premieres.

Based on the Henry Lawson short story, The Drover’s Wife, and reimagined for a modern audience by Leah Purcell, the film tells the story of a woman and her stubborn determination to protect her family from the harshness of a life in the Snowy Mountains in 1893.

The film is a feature adaptation of Purcell’s hugely successful stage play which received a swathe of awards, including Helpmann Awards for Best Play and Best New Australian Work; the David Williamson Prize for excellence in writing for Australian theatre; and the AWGIE Major Award.

Purcell stars in the film, directed it and wrote the screenplay.

Purcell says she is excited and proud to be premiering at SXSW.

“I’ve seen and heard so much about the festival during the years so to be following in the footsteps of the amazing films and filmmakers that have gone before me is humbling,” she says.

“As an Indigenous Australian woman and filmmaker, I am proud to be sharing a story that literally has mine and my family’s DNA all over it, and to be able to share our cultural practice as storytellers through film to the world.

“I wish I could be at SXSW for the film’s premiere, but I’ll be there in spirit.”

Two other Australian films have been selected for the 2021 SXSW festival, including feature documentary Under The Volcano, by Gracie Otto, which charts the rise and fall of AIR Studios Montserrat, the recording studio at the centre of the pop universe in the 1980s.

Horror short film The Moogai, from writer/director Jon Bell – which explores post-natal depression, transgenerational trauma and Australia’s stolen generation – is also screening as part of the festival line up.

The Drover’s Wife: The Legend of Molly Johnson is set for a cinema release in late 2021.

I was an extra for the final scene in this movie. Leah is not only a bloody hilarious person but also an incredibly intense actor. I also got to meet Nick Hope, the actor that played the infamous Bad Boy Bubby. His acting abilities are mind blowing.