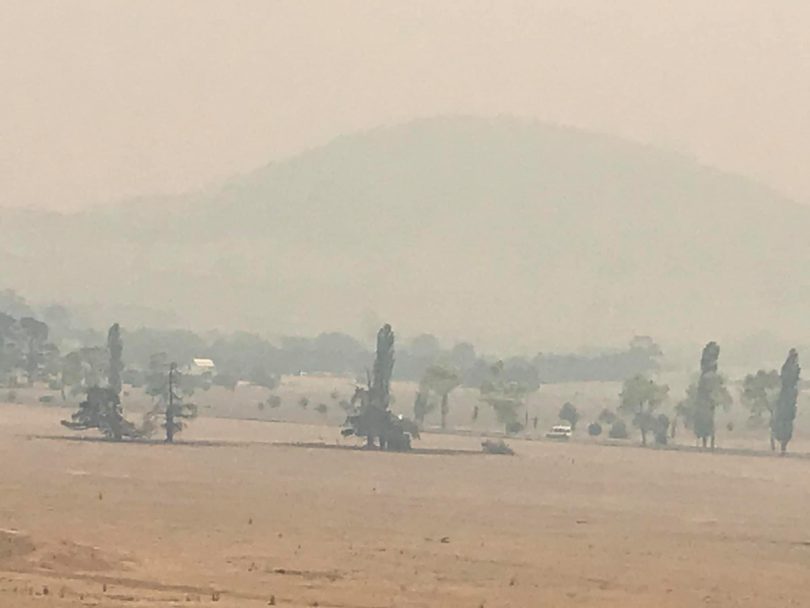 Emergency services have reassured residents that a widespread smoke haze across the region does not pose a threat to communities, and urged residents to only use the emergency triple-zero number if they see an unattended fire.

This appeal comes after the ACT Emergency Services Agency received more than 250 triple-zero calls about the smoke.

Two fire fronts are continuing to burn across a rugged area of 1150 hectares west of Braidwood, with easterly winds pushing the smoke haze across the region and into the ACT.

In Braidwood, particles of burning ash were falling in the streets on Thursday afternoon. 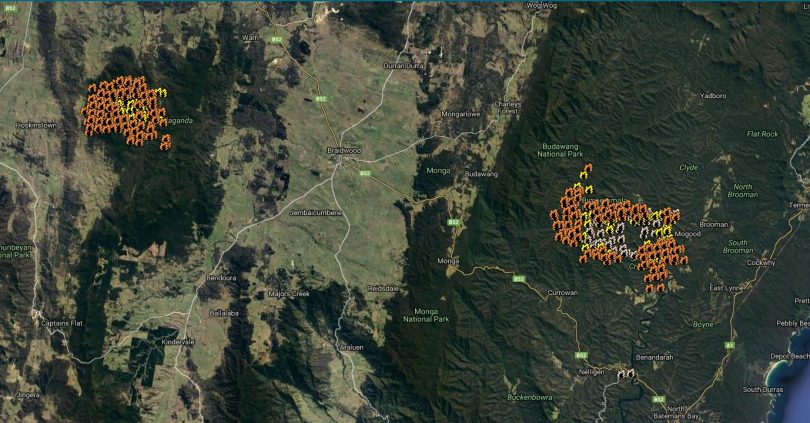 The two fire fronts are burning in widespread areas near Braidwood. Photo: Supplied.

An ACT Emergency Services Agency spokesperson said these fires did not pose a threat to the Territory.

“A change in wind direction has caused the smoke to blow across the region,” the ESA said in a statement last night.

“The ACT Emergency Services Agency wishes to reassure the community that there are no fires burning in the ACT.”

The advice also applies to communities in the wider Queanbeyan-Palerang region, where last night’s ‘watch and act’ alert for the North Black Range, Palerang fire, has now been reduced to an ‘advice’ level fire.

At 8:30 am this morning, the NSW Rural Fire Service said the bushfire in the Tallaganda National Park has grown to cover more than 1150 hectares and is burning out of control on multiple fronts.

The fire is burning in a south-westerly direction towards Forbes Creek and Hoskinstown.

To the east, the fire is also burning towards Muloons Creek and Bombay.

“Residents in surrounding areas including Queanbeyan and Canberra will see an increase of smoke.”

The advice for residents in the areas of Forbes Creek, Hoskinstown, Muloons Creek and Bombay is to monitor conditions and take advice from firefighters in the area.

Firefighters and aircraft are working to slow the spread and notify residents in the area.

Residents can monitor fires in NSW and the ACT via the NSW Fires Near Me page on the NSW Rural Fire website.

A total fire ban remains in place across the ACT and southern NSW region. The total fire ban was declared yesterday (28 November) with dry conditions and a top of 34 degrees. Westerly winds later in the day are expected to blow the smoke haze back towards the coast.

However, easterly winds in the evening may again create further smoke haze across the area. 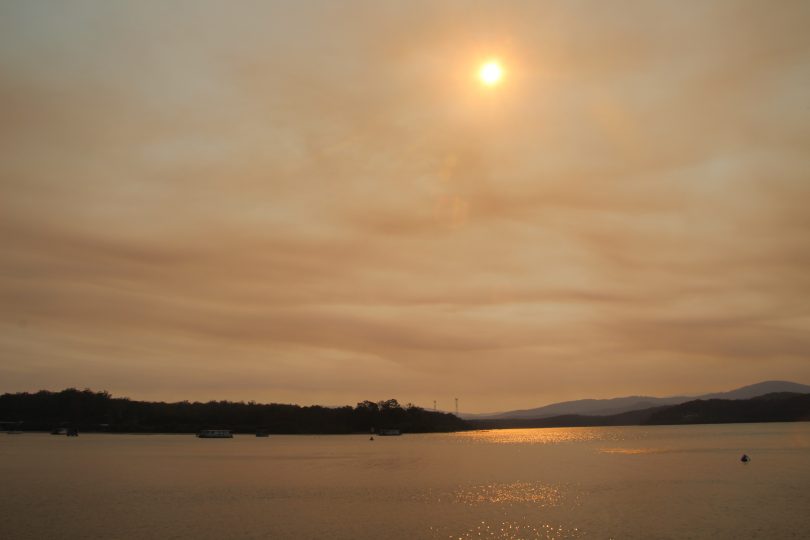 The view west from the Clyde River near Batemans Bay. Photo: Alex Rea

The ACT Health Directorate’s air quality readings across Canberra have all been labelled ‘hazardous’. The Directorate has advised residents to take appropriate precautions.

The ACT Health website says most people will not experience any health impact.

“However, people who are more sensitive to smoke in the air, particularly those with asthma and other heart or lung conditions, should be aware and take precautions. This includes taking medication as prescribed by their doctor, limiting time spent outdoors and avoiding vigorous exercise.”

Anyone with concerns about their health should seek medical advice from their health practitioner, and anyone experiencing wheezing, chest tightness or difficulty breathing should seek urgent medical assistance.

“The ACT Emergency Services Agency wishes to reassure the community that there are no fires burning in the ACT.”

Didn’t we hear statements like this a number of years ago? Those memories plus all that smoke last night (and no explanation of it on radio or TV) is why Canberra residents are a bit twitchy.

Futureproof - 11 minutes ago
Nuclear - the Greens say no New hydro dams - the Greens say no Windfarms in remote areas - Bob Brown says no... View
nobody - 46 minutes ago
According to the World Nuclear Association, in April 2020 there were 440 operating nuclear power reactors around the world, 5... View
OpenYourMind - 2 hours ago
Nuclear is deader than dead. Nobody will build a nuclear plant in Australia. Nuclear is gob-smackingly expensive compared to... View
News 151

Futureproof - 17 minutes ago
I ride my bike around LBG every weekend. Often I have to pull off to the left when the lycra crowd are riding two abreast, ba... View
James Forge - 1 hour ago
Warwick Bradly I work along there. I don’t think it an inconvenience I just wonder about these peoples regard for their own... View
Warwick Bradly - 1 hour ago
I've driven that road many, many times. I don't think I can ever remember a cyclist on there, or if there was, it can't have... View
Community 46

Virginia Loizou - 35 minutes ago
David Keir funny this isn’t a pie. You don’t get less because they make something specific for women to feel safer around... View
Louise Trott - 2 hours ago
Mark Heinrich Well said. An intelligent response. View
Cheryl Martine - 4 hours ago
Fabulous love it cheers to all who have worked hard to achieve this View
Breaking 3

Phil Tarrant - 2 hours ago
I disagree. Too many lives have been lost and huge cost to the public after police chases. I would rather see insurance pay o... View
Lifestyle 17

Liz Strachan - 3 hours ago
Sarah Jade Tamasi this almost looks like your house! View
Alice Boc - 4 hours ago
Question. Who can afford these places?! Who are buying these properties?!... View
Community 45

Dan Gain - 4 hours ago
Have you fully recovered from when you got "torn" from that probe? View
News 6

nobody - 4 hours ago
Hold on. The ACT Smart website currently lists a roof-top solar subsidy program of 50% or up to $2,500. So the ratepayer/taxp... View
rsm1105 - 5 hours ago
It would be good to understand how 250mw stacks up if the wind is not blowing and the sun is not shining. View
Tony Armstrong - 5 hours ago
Barnaby's back, there'll be coal for all. View
News 20

Daniel Duncan - 5 hours ago
May as well rush the robot work force in as no business will be able to run long term. Next you will want a UBI.. View
Community 7

GRAPHIC CONTENT: Some readers may find this court report highly disturbing. A prisoner at Canberra's jail was bashed so badly by...
Property 25

More than 1000 Canberrans across six suburbs have been given the chance to change the look of their streets as...
Property 25

@The_RiotACT @The_RiotACT
Archie Tsirimokos is one of the ACT's top legal professionals and chair of the Canberra Business Chamber, but there's more to him than meets the eye https://t.co/BtjpRtpks0 (13 minutes ago)

@The_RiotACT @The_RiotACT
The dumping of iIllegal and potentially dangerous items at a Gungahlin recycling centre has left locals shaking their heads https://t.co/fqspVt4AN1 (1 hour ago)