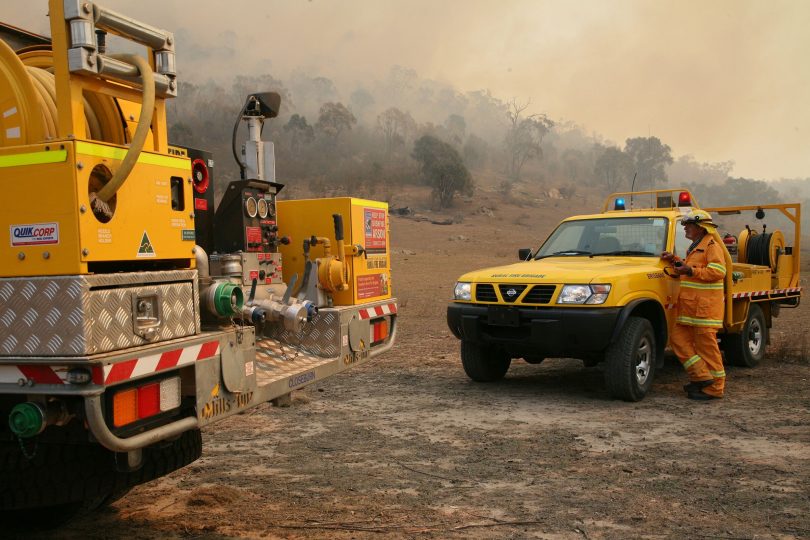 A number of fire tankers sent to Queanbeyan from Queensland to help with the bushfires were troublesome and had continuous mechanical issues, the Royal Commission into National Natural Disaster Arrangements has heard.

One vehicle could only travel at a maximum speed of 85 km/h and had to climb hills in first gear before it was taken offline on its fourth day of service.

A second had a pump that could only operate at 40 per cent capacity while another truck needed tools from three different vehicles to change a flat tire.

“The vehicles were sent to NSW with only minimum firefighting equipment on them – as far as I understand, they had the hose reel and pump, and a couple of other things,” John Stalker, a volunteer from the Samford Rural Fire Brigade in Queensland told the royal commission.

Mr Stalker’s brigade sent strike teams down to NSW to help with the fires but says the equipment and resources were not adequate.

“Last fire season Queensland deployed a number of its own appliances to NSW. That, in itself, proved problematic to our firefighters because a number of those vehicles were no longer fit for purpose,” he said.

“We had one particular strike team [that] had continuous mechanical issues. If it wasn’t for the well-oiled machine in Queanbeyan with NSW RFS who were able to locate and provide appropriate equipment, those vehicles wouldn’t have been able to achieve much on the fire ground.”

Mr Stalker had previously put in a request for more equipment ahead of last summer’s bushfire season, including requests for four hoses and nozzles, a container of foam and a transfer pump.

The brigade only received the foam.

It was the most ferocious fire that the under-resourced volunteers had ever seen, Mr Stalker said.

“The three members of our brigade who attended that fire were just, they just couldn’t believe the level of devastation,” he said.

“We were not used to seeing just total annihilation of timberlands. They were really overwhelmed by the intensity of the fires that they encountered down there.”

The defective and tattered state of the firefighting trucks sent south from Queensland built into a greater story of under-preparedness for the summer’s bushfires.

“We were very, very lucky that there were not a lot more injuries, indeed deaths, occasioned during that evacuation. The preparations for the evacuation were essentially non-existent, and it was a question of people literally throwing themselves into Lake Conjola,” he said.

“Whilst everyone was trying to evacuate down through the lake, helicopter water bombers were trying to fill their buckets in that same lake.

“It was an extremely dangerous situation.”

Former NSW fire chief Greg Mullins also told the royal commission that Australia was too under-resourced to deal with increasingly devastating bushfires as longer fire seasons in Australia are starting to overlap with seasons overseas, making it harder to share resources with other countries.

“So where do we get the resources? We had to bring them in internationally, and they were still burning.

“I was in California in November last year and they are shaking their heads about the longer fire seasons, driven by climate change, restricting our ability to share resources.”

The royal commission will continue to hear evidence in relation to states and territories this week. Hearings into the actions and preparations of the Federal Government begin next week.

Sending their guys interstate with buckets of junk......

Should have just sent personel amd found trucks for them.

I believe an nz crew used our local truck

Disgraceful, cost cutting has caught up with governments now, this fire escalated very quickly that day, people madly trying to get out Queanbeyan, visibility poor, as I recall, we stayed through it and it was touch and go for most of the day, the firies did a great job with the little resource they had, fortunately a drop in wind and direction saved houses and lives........ State,Local and Fed Governments spend the money or lose lives.

chewy14 - 32 minutes ago
Nobody, Except no one is saying that wind and solar are the only renewable technologies available.... View
Capital Retro - 33 minutes ago
In the meantime I will be storing petrol for the cost of it and the container only so when the lights go out I won't have an... View
nobody - 1 hour ago
I agree the trend is away from fossil fuels, so that all our coal derived electricity, gas derived heating, and and oil deriv... View
Motoring 32

@The_RiotACT @The_RiotACT
22 Canberra suburbs now have million dollar plus median home values. Is yours on the list? https://t.co/qPM3RdCSgB (22 minutes ago)