Fireworks light up bush at Bredbo, RFS "not happy" 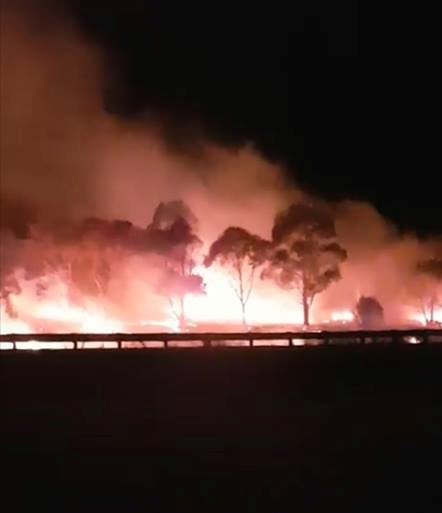 “Arson is a crime, and we are not happy,” says a spokesperson for Snowy Monaro Rural Fire Service.

In the same week that the region was coloured bright red on the fire danger map for the season ahead, volunteers were called to a blaze between Cooma and Canberra that appears to be criminal.

Just before 11:00 pm on Thursday night (August 29) volunteer firefighters were called to a fire and reports of an explosion on the Monaro Highway, just north of Bredbo.

“Upon arrival, the Bredbo Rural Fire Brigade found an area of approximately one acre on the side of the highway burning intensely,” an RFS spokesperson says.

“The prompt response of the brigade brought the fire under control.”

However, as this photo from the scene shows, the fire burnt intensely, despite it being very cold and no wind.

“This type of behaviour perplexes us and yes the law considers this arson.

“Police were called and investigations continue.”

The RFS warns that penalties for arson in NSW carry long jail sentences and large fines.

Anyone who has any information, or saw any suspicious activity on or around the Monaro Highway just north of Bredbo on Thursday night is asked to contact Cooma Police.

“The NSW Rural Fire Service and Police have zero tolerance for arson and arsonists!” the spokesperson says.

Fire Permits will be required from this date.

The decision to bring the Bush Fire Danger Period forward is the result of the ongoing dry conditions and has followed consultation with Brigade Captains, Group Captains and member agencies of the Bush Fire Management Committee.