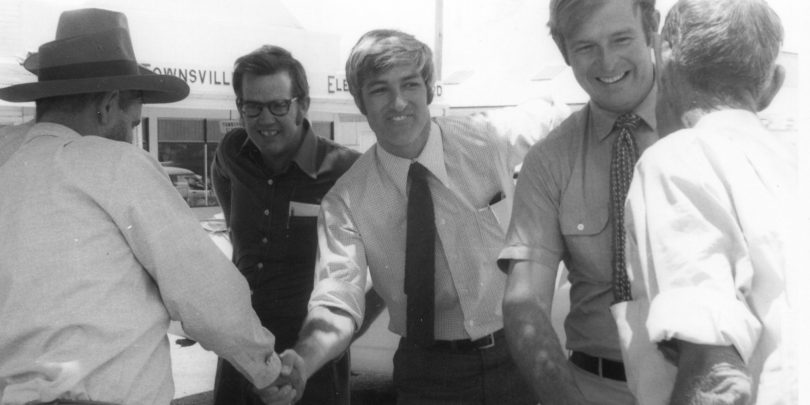 Doug Anthony (right) on the campaign trail for the National Party. Photo: nationals.org.au.

Many Canberra commuters who pass Parliament House on a daily basis will have noticed that the flags are flying at half-mast.

The flags recognise Australia’s longest-serving deputy prime minister and former Country Party leader Doug Anthony, who is being farewelled at a state funeral on the NSW north coast.

The funeral service is being held at the Twin Town Services Club in Tweed Heads. Deputy Prime Minister Michael McCormack is attending along with senior Nationals figures.

He is survived by his three children and nine grandchildren, and by his wife Margot, a highly accomplished concert pianist who studied at the Sydney Conservatorium and supported the arts throughout her life.

Mr Anthony, who died before Christmas just short of his 91st birthday, was leader of the Country and National parties for 12 years and deputy prime minister for nearly 10.

Held in the highest esteem by many rural voters, he exemplified the old-fashioned Country Party values that many felt were superseded when the party transformed into the Nationals.

Mr Anthony was deeply involved as Minister for the Interior in developing the ACT, including the opening of Lake Burley Griffin and the development of the Carillion and the James Cook Memorial Fountain.

He was also part of a three-generation political dynasty: his father Larry was the Member for Richmond on the NSW North Coast but died suddenly in office in 1957. Doug Anthony replaced him at the age of 27 and was himself followed by his son Larry, who won the seat in 1996. The Anthony family owned a dairy farm at Murwillumbah and had piggery and cotton interests.

All three Anthony men held ministerial portfolios, but Doug Anthony’s greatest influence was within the Coalition where he served six prime ministers. He was deputy to prime ministers John Gorton, William McMahon and Malcolm Fraser with whom he enjoyed a particularly strong relationship as a fellow farmer.

As Primary Industry Minister, Mr Anthony established the Australian Wool Corporation. As Trade and Resources Minister he worked to modernise and expand our trade agreement with New Zealand, opened up the uranium industry and sought to expand trade with Japan, China and the Middle East.

Mr Anthony was responsible for the wheat quota scheme, reconstruction of the dairy industry and the upgrading of export abattoirs to US standards to maintain the beef trade. He also introduced the wool reserve price scheme, later to descend into chaos but at the time a radical attempt to guarantee producer incomes.

Widely respected as a decent and committed politician, Mr Anthony famously took his Christmas break in a caravan at New Brighton on the NSW far north coast while Malcolm Fraser was on holidays.

“I’ll probably be remembered for the caravan more than anything else in my political career. When the nation heard I was running the show from my caravan it sent a message that it was Christmas, time to relax, everything was on hold, but also everything was being looked after,” he said.

But despite his cheerful, friendly and relaxed reputation, Mr Anthony was also known as a hard-nosed politician who wasn’t afraid to kick heads, exerting a powerful bush influence on Coalition policies for more than 20 years.

Together, he, Peter Nixon and Ian Sinclair took on both their Liberal allies and international trading partners, including British agriculture minister Geoffrey Ripon, whom Mr Anthony said responded with contempt when the colonial upstarts challenged European farm policies.

The re-brand to the Nationals came within his time, a response to changing demographics and expectations from rural constituents. Much else has changed in the intervening years, but as he’s laid to rest rural and regional voters around Australia will be recalling a different era. 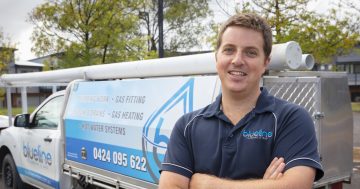 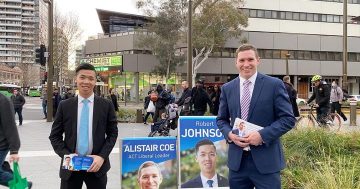