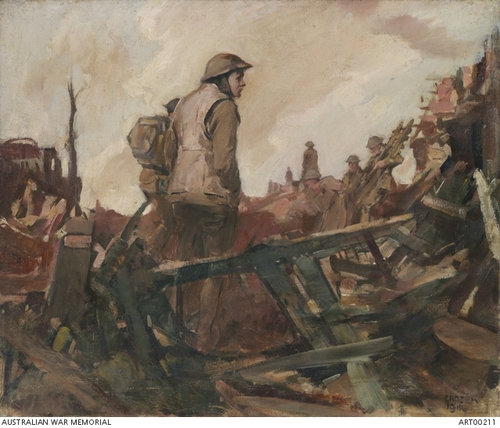 It is no wonder that the Australian War Memorial wins tourism awards, as the creativity of experiences provided for visitors is second to none.

They have recently come up with another first. The Flowers of War project. Chris Latham (of Canberra International Music Festival fame) is the musician and director of the program and has been appointed for the period of 2017-2021.

Chris has a long history of fascination with the twisted contradictions of human souls – “the monster who destroys, not for food or resources, but out of rage, and the sublime being who makes art to transcend, creating beauty out of their inspired imagination. His personal experience of loss through war was also felt profoundly. He tells of the war service in his own family, in which his two grandfathers had served – one in WW1 and the other in WW2. Afterwards, he tells us that both found it difficult to love their children (his parents). His grandmother apparently conversely loved everyone but was cruelly haunted by nightmares from serving as a nurse in the Somme. His great Uncle Peter, a famous musicologist, had hoped as a young man to be a great pianist and composer, but his shoulder had been smashed by a bullet, making it deeply painful for him to play.

In a way, we are all touched by war in our past in some way or another.

These preoccupations gave rise to a decade of work for Chris, making the Gallipoli Symphony (2005-15), his last full program in which I was privileged to work with him, where he curated for the Canberra International Music Festival in 2014, and his current work on this Flowers of War project.

Chris’s first task here is to create “The Diggers’ Requiem” for the Australian War Memorial and the Department of Veteran’s Affairs. The premiere will be on April 23, 2018, in France and on October 5, 2018, in Canberra. This is the follow-up to the Gallipoli Symphony, on which ABC-TV had a broadcast from the Istanbul premiere, released on DVD and CD. See: http://www.abc.net.au/classic/content/2016/04/23/4446255.htm

The website for the Flowers of War project, tells us that: “it is a project to uncover, perform, discuss and celebrate the music and art that talented men used to cope with the horror and to mark their experiences. Over the next three years, nine concerts of recently discovered music, diaries, poetry, and art will be performed in Canberra, Sydney, Melbourne, and France, including a tour of villages of the Somme. These concerts will be accompanied by symposia with noted experts in the field, so marking the significant centenaries of the Great War.”

Chris often speaks of the cultural cost of war, and how the tragic loss of wartime composers is something that must be acknowledged. He immerses himself deeply, and ultimately the work he does has a profound effect on him, as he knows that making or recovering works from the wars can release internalised grief. He refers to Luc Besson’s film, “The Big Blue”, where the free divers go deeper and deeper until the risk is that they will no longer wish to return to the surface. Chris says of this, “I know I face a similar risk, immersing myself so deeply in these horrific events, but I feel these artistic works, created in the battlefields as an attempt to leave some trace of consciousness and memory in the face of erasure, have something to teach us.”

For me, personally, I am looking forward to the 100 Songs Project in which they will record 100 songs from WW1 over the next two years and people will be able to download them from the AWM site. I heard Adjunct Professor Jeff Brownrigg speaking of such songs on the ABC Canberra program with Lish Fejer recently, and some of these old war songs, (surprisingly) were familiar, and not only were there the solemn sad songs of war, but also some rather jolly songs that are uplifting and therapy for the soul.

This project could be most interesting to follow and you can go to the Flowers of War website to find out about the extensive program to come.

Kat Rothwell - 17 minutes ago
Allison Jay it is very beige View
Acton - 18 hours ago
Seems some people would like to live in a police state. View
Food & Wine 101

Despina Despina - 12 hours ago
We are so lucky in this country. Yet we have the COVID deniers, and anti vaxers who seem to refuse that COVID exists. Thank y... View
Lance Russell Baker - 13 hours ago
Timothy Bailey Too true. Their bizarre belief that they are the world's shining example of democracy is unbelievable. I could... View
David Kidd - 16 hours ago
Timothy Bailey No we do not View
Business 6

@The_RiotACT @The_RiotACT
An environmental impact statement has been prepared to assess the impact of sewage discharge into Lake Burley Griffin as part of a major upgrade to Queanbeyan’s ageing treatment plant https://t.co/RZ6RQGw4FL (11 minutes ago)