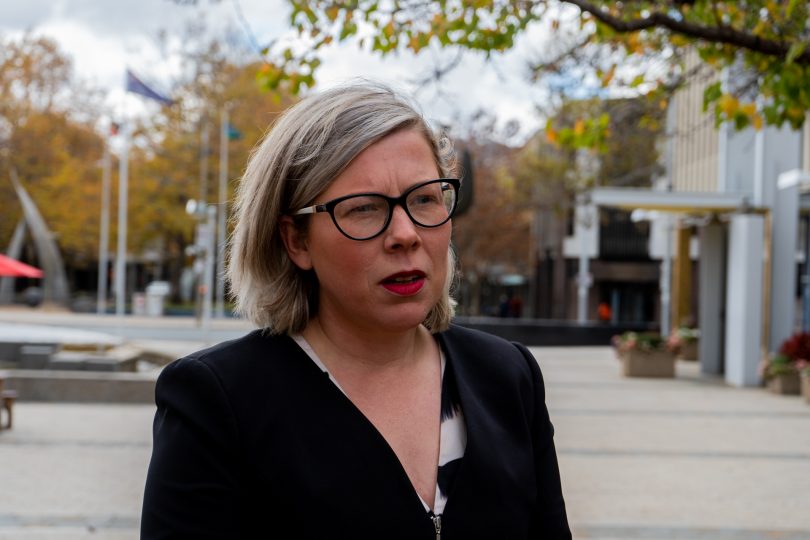 Mothers and children are being forced to sleep in their car as access to emergency housing in Canberra reaches a crisis point, according to Women’s Legal Centre (WLC) principal solicitor Claudia Maclean.

Victims of domestic abuse and violence who attend WLC have been told they could not access emergency accommodation for up to two weeks, said Ms Maclean.

“It is not only quick access to cash [that victims need], but access to long-term safety solutions,” she said. “Part of that is access to legal support, social support and housing.

“Any form of practical support for victim-survivors is always a good start, particularly in Canberra where we have the highest cost of renting and housing shortages.”

ACT Minister for Women and Minister for the Prevention of Domestic and Family Violence, Yvette Berry, said the ACT Government provides funding to services to assist people who are experiencing domestic violence so they can access emergency accommodation immediately. 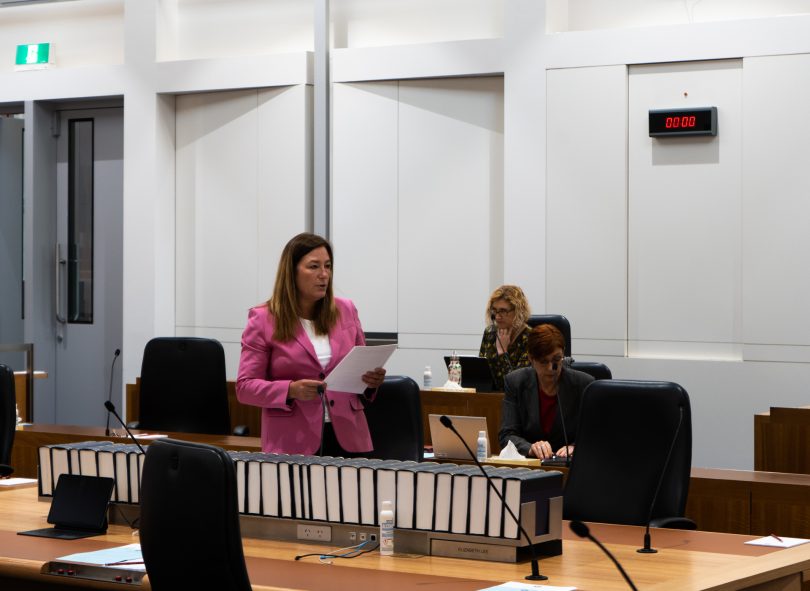 ACT Minister for Women and Minister for the Prevention of Domestic and Family Violence, Yvette Berry, updated the ACT Legislative Assembly about the government’s progress on sexual assault legislative reform on Tuesday, 11 May. Photo: Dominic Giannini.

However, Ms Maclean said a few nights in a hotel is a band-aid solution when access to public and social housing in the ACT is limited.

Currently, the average wait time for a priority house is 280 days.

“There is a disconnect,” said Ms Maclean. “People can spend a few nights in hotels here and there, but then there is a gap between emergency accommodation and emergency housing.”

Ms Berry said the ACT Government also supports people who experience domestic or family violence by ensuring they remain safe in their own homes by removing the perpetrator.

But this could also be problematic, said Ms Maclean, especially when they are the sole income earner and leave the family and children without income or access to money.

“For some, knowing the perpetrator is in prison is the only thing that will keep them safe, but for others, it is an absolute crisis because they have lost any form of financial support,” she said.

Discussions about domestic violence law reform were reinvigorated this week when ACT Opposition Leader Elizabeth Lee released a draft bill for consultation, which would impose additional sentencing penalties within the context of family violence.

The reform is welcomed by the WLC, although Ms Maclean said it is important that current laws are adequately policed and enforced.

A review into the Family Violence Act (2016), handed to the ACT Government in 2020, found police responses to family violence orders (FVO) and the exclusion of specific types of abuse and problems with after-hours orders left victims in a vulnerable and precarious position.

It also flagged amending the definition of family violence in the act to cover technological abuse, coercive control and cultural abuse.

Ms Maclean said it is too early to tell if the review has had any impact on how FVOs are enforced.

Some WLC clients said their case could not be investigated because it was a ‘he said, she said’ situation, while others reported having positive experiences with police.

And when cases are dismissed by police or go to court and either fail to record a conviction or record a lenient conviction, perpetrators become emboldened and can feel untouchable, said Ms Maclean.

Following a case where a perpetrator attacked his wife with an axe before holding the weapon to his daughter’s throat but only received four months in prison, the Office of the Director of Public Prosecutions (DPP) warned that sentences for domestic violence offences in the ACT are too lenient.

Ms Maclean said that while family violence is complex and it is not as simple as using jail time as a deterrent, strong penalties articulate what society thinks is acceptable and unacceptable behaviour.

And men cannot legally take their children to a men’s refuge unless they are no longer children even if the mother has taken a psychotic turn and and threatening death.

Given the extent of the policy osmosis between Victoria and the ACT, something like the private-public housing partnership described in this article might work here to alleviate these awful situations –

The predictable consequences of ACT government policy of not supplying the market with land on which to build housing in an era of liberalised finance, irresponsible lending & low interest rates.

The last Whitlam land release saw ~7,000 applicants come forward with the money to buy land and build housing, but they were prevented from building the additional housing we need by a government that allowed a paltry 100 lots for sale. ACT government preferences homelessness and high land prices over supplying the market. The ideal circumstances for bankers, developers, property investors, and real estate agents to make out like bandits.

The sad reality is that Canberra voted for 4 more years of this in 2020.

Maybe they can sleep on that little Lake extension that’s being built now at Acton. There is $$$ for that.

Remember folks. There is no $$$ to be made from domestic violence, mental health and homelessness. If politicians and corporate swines would somehow make $$$ from it this problem would go away in instant!

Sorry but this isn’t limited to women and children there are many men in a similar position. Often a family breakdown leaves one of the partners homeless without the money to rent (bond, 2 weeks rent) not to mention needing furniture etc. Some men have their kids with them or can’t have contact with their kids as they don’t have a home to take them to. There are so many government houses sitting empty that could be accommodating people. What is worse is if these homeless people are taken in by friends to keep them safe, Housing no longer considers them as homeless or needing urgent assistance. This is so wrong

Madness, especially given all of the empty gov buildings.

Yes they defo need the tram, expensive land releases, expensive suburbs. Whereas they havent dealt with fundamental issues of the society i.e. Homelessness. So much for the. Nations Capital.

Joel Suryawanshi wow domestic violence seem to be a huge issue there. Sad!

I guess it’s OK for fathers to sleep in their car!

Kevin Hodder you can always go to your local member and push for assistance for single fathers, or maybe seek out a reporter who is interested in your story of how you live in a car with your kids…

Linda Stapleton why can’t these policies or programs be aimed at both genders instead of being one or the other. Everyone deserves a warm safe place to live

Julia Felton I didnt say they couldnt, where did I say this…what a strange comment from you…. feel free to quote me to show where I said this…

Linda Stapleton your comment infers that men have to argue their own case. Why not just argue the case for both sexes

They put a family of meth heads in a brand new 1.5 million dollar home that was purpose built for disabled people across the road from us. They’ve trashed it, it’s unlivable now and they were the first and only tenants in it. It will have to be knocked down now because they smoke meth in it.
1.5 million dollars.. that could have housed so many people… but nope. Good work ACT housing.

Tegan Martin the govt needs to do regular. Inspections and evict if places are not cared for
Build ten times the number of government houses and repair empty ones.

Margaret Freemantle Unfortunately they’ve been trying. But the family in particular only refuses them entry and then separate community organisations “work with them” to help them stay there..

The other worst part is that even if they manage to remove them, they’ll have no choice but to give them another house, which they’ll be priority for. However, the brand new house they’re currently in won’t be suitable for new tenants, they’ll have to knock it down.

Tegan Martin not sure what the answer is. Somehow, there has to be some pride instilled – perhaps well kept places get reduced rent??

We really need someone to start creating a map of houses and suburbs.
Yes, housing is vital to so many issues in the break up of relationships. The issue is though, that by accepting anything other than a place in a refuge, women have a safe roof over their heads and are no longer in urgent need. Perhaps the answer is more refuges???