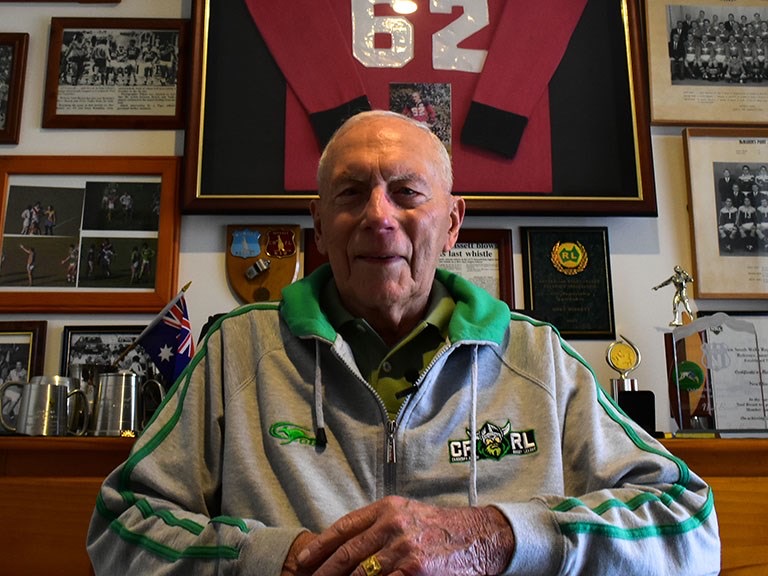 Noel Bissett will be remembered for his contribution to rugby league as a player and as a referee. Photo: Canberra Region Rugby League.

Noel Bissett loved telling the story about the day he refereed a game at Captains Flat. On that day an elderly lady brandishing an umbrella pursued him across the ground.

The elderly lady in question was apparently upset with a number of Noel’s rulings that happened to go against the home team.

For Noel, it was part of the fabric of rugby league and he appeared to love every minute of his time in the game.

Just as well, given that he devoted 52 years to rugby league after moving to this region in 1965 due to a transfer with the fire brigade.

Rugby league was clearly his lifelong passion. He had played in the lower grades with the North Sydney Bears, and upon moving to the ACT played 66 games for East Canberra.

But it was as a referee that he left his mark.

Moving into the refereeing ranks in 1968 Noel went on to officiate 275 Country Rugby League matches including a record 11 grand finals before becoming the first Canberra referee to control first grade in the NSWRL.

He refereed 103 matches in Sydney.

Noel served on the Canberra District Referees Association committee for 21 years including chairman for 12 years before stepping down in 2018.

His main aim was make Canberra referees more professional. He developed training programs and insisted that players and coaches treated his officials with respect.

He won many accolades for his service to rugby league and the fire brigade, including the Medal of the Order of Australia in 2013.

I knew Noel for 30 years. Over that period, only once did I witness him express frustration, and this one instance was when he felt as though somebody wasn’t doing the right thing by the game.

Noel had an exceptional moral compass with a strong sense of right and wrong. He was one of the most selfless individuals I have ever met.

My most recent contact with him was during his time as Chairman of the Men of League. He was always looking for ways to contribute.

Noel passed away over the Anzac weekend. Many of us who knew him paused to reflect on the impact he made on so many. Without doubt, Noel established the template for a life of giving beyond self.

A true gentleman. His loss will be felt deeply by ACT Fire & Rescue and the Historical society of which he was Chair. My heartfelt condolences to his family and friends.