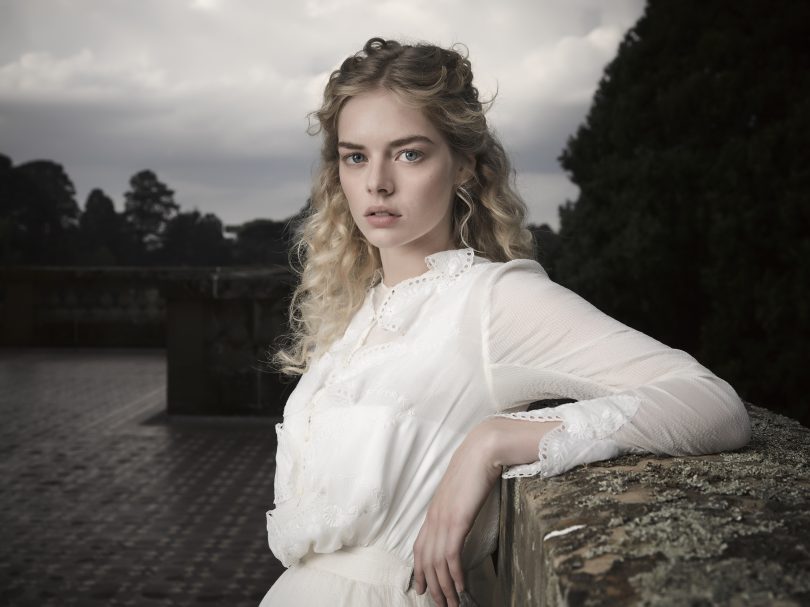 Former Canberra girl Samara Weaving is a world away from the swimsuits and beach scenes of television’s Home and Away, in her portrayal of prim and proper British student Irma Leopold in Foxtel’s new drama, Picnic at Hanging Rock.

The six-part miniseries recreates the iconic novel by Joan Lindsay and 1975 Australian film of the same name, to chart the inexplicable disappearance of three school girls and their teacher while on a picnic at Victoria’s Hanging Rock on Valentines Day, 1900.

Samara, who attended Canberra Girls Grammar when she lived in the nation’s capital, is perhaps best known to Australian audiences for playing Indi Walker in the long-running television soap Home and Away, from 2009 to 2013.

In the Fremantle Media production of Picnic at Hanging Rock, she still sports long blonde locks, but the Aussie beach accent has been replaced with a refined British accent, and there is not a short school uniform in sight. Restrictive undergarments, pretty ankle length dresses and pointed black boots are the norm in this period drama.

“She is a British school student who has been living in Paris,” Samara says in a short clip promoting the miniseries.

“So she is the worldlier one of the group. She is also the wealthiest. So she is a bit of a snob, you might say.”

Popular Game of Thrones actress Natalie Dormer plays headmistress Mrs Appleyard, while Lily Sullivan recreates the character of the free-spirited Miranda – the girl with the long blonde hair whose image is immortalised in iconic Australian film posters, courtesy of the actress who played her in the 1975 film, Anne-Louise Lambert.

Binge watchers can view the entire Picnic at Hanging Rock television series on Foxtel on Demand from 8:30 pm on Sunday May 6th.

Canberra also has huge granite boulders, not unlike those seen in the film and television versions of Picnic at Hanging Rock.

A nine-and-a half kilometre return walk to Square Rock, in Namadgi National Park, is a mere 40 minutes drive south of Canberra and is easy to access. The trail has been fitted with a mesh walkway at the start of the walk, allowing for a gentle climb ahead of Alpine ash forests and snow gum woodland.

On the way you will pass a giant cube-shaped rock, and an optional short detour to Orroral Valley, which has views of a valley once farmed by early European settlers.

Square Rock appears to pop out of nowhere a little further ahead, just as walkers begin to wonder where it is. A metal ladder provides easy access to a large rock ledge, where breathtaking views of the Brindabella Ranges await. Take extreme care at this point, as it is near the cliff edge.

Follow the signs to Corin Road and proceed for approximately 14km until you get to the Corin Forest Mountain Reserve (on the right). From there the car park for Square Rock, named Smokers Gap, is about 800 metres ahead. Don’t forget to sign the book inside a metal box at the start of the walk, to let rangers know the time you set off, the number of people in your group, and your car’s number plate details. It is strongly recommended to bring water on this walk, and wear good sturdy shoes.

Feedback - 11 hours ago
This article from two days ago in the riot act - further explains this last point https://the-riotact.com/how-is-the-covid-19... View
Feedback - 11 hours ago
There are a couple of issues with your point. - Medical experts have already spoken, see Canberra Times article, and the Dept... View
enjayjay - 12 hours ago
Or how about we let the medical experts and educators announce a plan when it’s determined to be safe as safe as possible i... View
Business 27