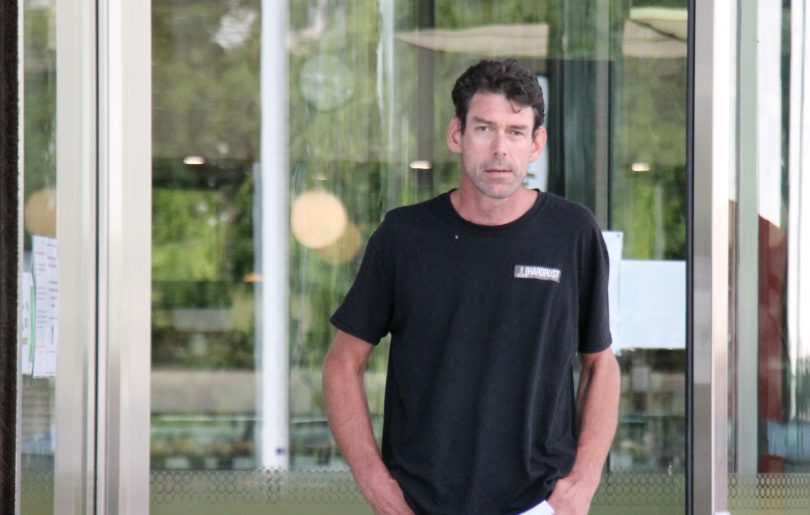 The fourth person to be charged over an alleged role in the fire at Old Parliament House last year is also accused of pushing two police officers downstairs during the destructive protests at the building.

When Ryan Dean Harder, 40, from Victoria, appeared in the ACT Magistrates Court on Wednesday (2 February), the court heard it is thought he has a sovereign citizen-style belief system and is also alleged to be a leader of the recent Convoy to Canberra.

However, his Legal Aid lawyer Georgia Le Couteur said there was no evidence he was such a leader.

Court documents allege during the protest at Old Parliament House on 30 December 2021, a co-defendant named Nicholas Malcolm Reed, 30, used a wooden shield to scoop up parts of a ceremonial fire outside the building and carry them to the front door area.

Bruce Shillingsworth Jr, 30, is alleged to have stood near the building’s doors and appeared to coordinate people to make way for Mr Reed while this happened.

The documents allege around the same time, co-defendant Dylan Wilson, a 38-year-old from Lindendale, told Mr Harder police were protecting something hidden in Old Parliament House that “attaches Crown claim to this land” and “once we get through this door we’ll find out what it is”.

Police tried to reach the doors to extinguish the flames, but protesters blocked their access.

Mr Harder allegedly joined the protesters and put himself between police and the fire, obstructing one officer, then grabbing and pushing another down the portico stairs.

When a third officer was dragged into the crowd of protesters, Mr Harder is also alleged to have grabbed and pushed them down the stairs.

Shortly afterwards, he allegedly shouted, “let it burn, let it burn”, as he walked away from the portico.

He also allegedly live-streamed a video of himself to social media in which he said, “I got pepper-sprayed and pushed the cops off. I pushed two coppers off the stairs. Plant the foot and give them a good shoulder”.

Mr Harder was arrested on the Barton Highway on Tuesday (1 February) and charged with arson by joint commission, assaulting two frontline community service providers and obstructing a public official.

Ms Le Couteur applied for her client to be released on bail, arguing it appeared the prosecution’s case was not particularly strong.

She said the father-of-three had no criminal history, no ongoing relationship with his co-defendants and intended to return to the Territory for his court appearances in the future.

The prosecutor disagreed the case against him wasn’t strong, argued he had no ties to the ACT and alleged he had the means to direct and coordinate protests over social media.

Magistrate Robert Cook said there was a “mob mentality” during the protests at Old Parliament House where destruction was caused to an important building that was part of Australia’s history.

He said while Mr Harder had been identified as having a sovereign-citizen-style belief, and such a view might mean he wouldn’t attend court in the future, if that happened, a warrant could be issued for his arrest.

Magistrate Cook granted bail and adjourned the matter to 23 February for a plea.

The charges against the three other co-defendants remain before the courts.