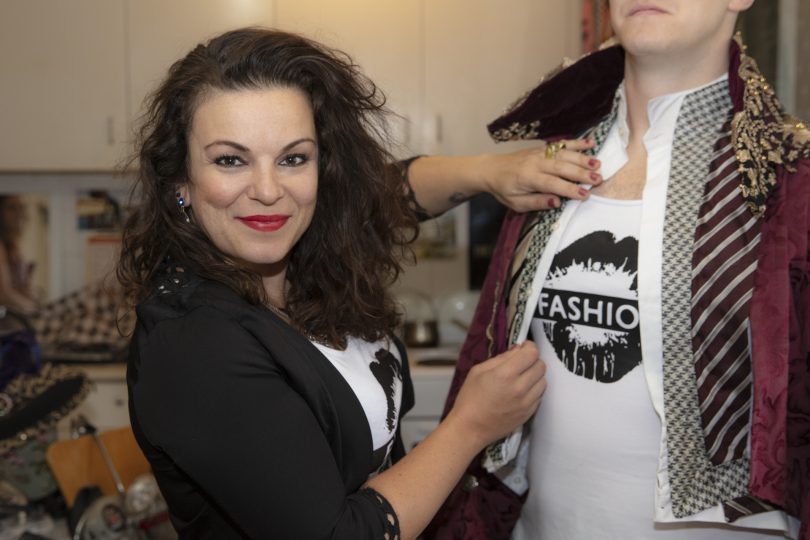 Seamstress for the Bard. Fiona Hopkins fits out Liam, who is playing Lysander. Photos: Thomas Lucraft.

The costume designer for Lakespeare’s upcoming production of A Midsummer Night’s Dream has also been working in Sydney on Twelfth Night with Christopher Stollery, the same director who brought it to Canberra audiences last year in the free series of performances that are now a firm part of the summer calendar.

Her costumes made an impression then and this year she hopes to take things to a new level with a mix of the fantastical and surreal with the traditional, inspired by director Tim Sekuless’s high-fashion vision for the play.

“Tim has been very detailed in his world, and placed it in the fashion haute couture creative world of designers and models,” Fiona says.

That’s a gift for someone like Fiona, who studied fashion in her younger years before going on to stage and screen acting overseas before coming to Canberra in 2016.

She has always loved that fusion of fashion with the theatre, and Shakespeare has been a massive influence in her life, having trained at London’s Central School of Speech and Drama.

“I feel blessed to be able to have my own surreal, fantasy world of design, and then fuse it into my understanding of Shakespeare and acting,” says Fiona, who lists Dali, Gaultier and Westwood among her influences.

But what has A Midsummer Night’s Dream got to do with fashion? Tim makes a clever connection in a play where the characters are manipulated magically by the fairies.

“I found inspiration in the fashion industry because of the way huge corporations can spend vast resources on marketing and advertising to strongly influence our choices and desires,” he says.

“When people buy the latest fashions they really want them and I think that type of psychological impact is the closest thing we have today to the magical influence of the fairies in the show.”

He sees it as a major way for modern audiences to get the idea of ”this unknowable, unconscious force that the control our choices”.

Tim has also brought the play up to speed in the #metoo era, with all-female fairies and casting a woman as the merged character of Oberon (King of the Fairies) and patriarch Theseus, keeping it light in what he says should be a fun show and rip-roaring comedy. 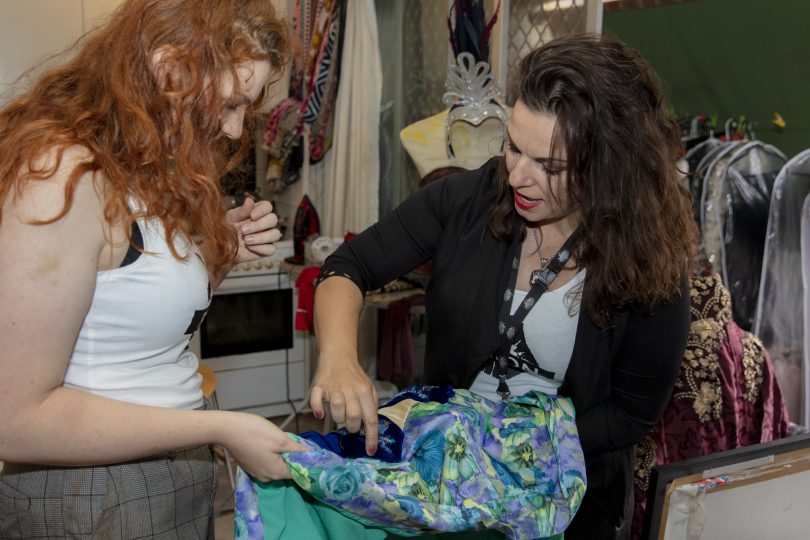 Fiona works with Anneka on her costume.

He says that the way women are treated in the play and some of the themes Shakespeare uses as a backdrop are taken far more seriously these days than in Elizabethan times.

“I wanted to find an interpretation that stays true to the original intent and kept it light to show people the fun escapist comedy, the barrel of laughs, that the show is meant to be,” he said.

For Fiona, the process has been a continuous conversation with Tim and the actors, from the practicality of a costume to its psychological contribution to the character.

“It’s not something I’m putting on an actor because I think its pretty,” she says.

But they will be striking, with lots of ”colour, vibrancy, festivity and flair”, saying Tim has been fun, creative, intricate and symbolic with his ideas.

“The way I repurpose and cut garments together there will be that dream-like sense to the costumes,” she says.

Fiona sources many of her materials from Salvation Army op-shops, giving garments a new life in her characters.

She says a costume does tell its own story and first impressions mean a lot to an audience. 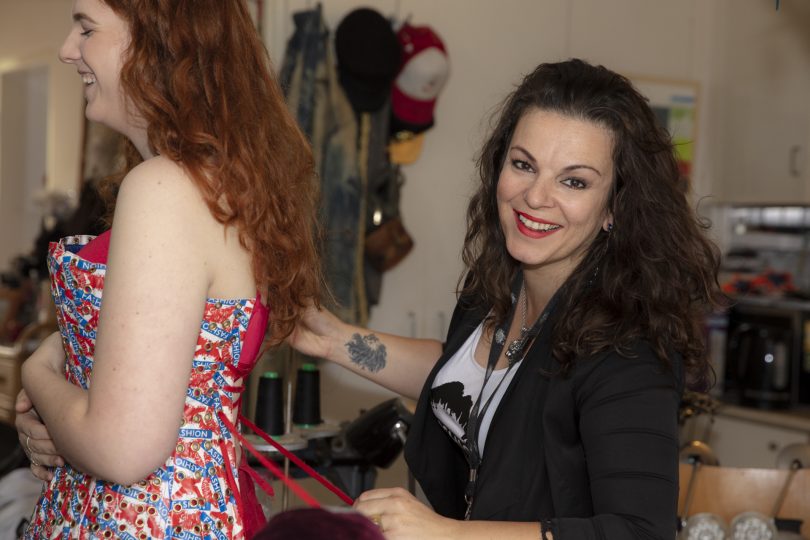 Anneka tries on another costume. First impressions mean a lot to an audience, says Fiona.

With less than a week to show time, the pressure is on but Tim says it has been an absolute blast.

“This is a dream team to be working with, I can’t wait to share it with everyone,” he says.

Free tickets are available through Eventbrite at www.lakespeare.com. Bookings help Lakespeare & Co and food vendors tailor the event to the size of the audience, enhancing the experience for all.

The Tuggeranong performances of A Midsummer Night’s Dream are supported by the Vikings Group.

Shakespeare by the Vines at Pialligo Estate on 27 and 28 February offers a dinner with the show, with three separately priced packages. For more information and bookings go to the Pialligo Estate Events Page.

Love your creativity and work, Fiona!