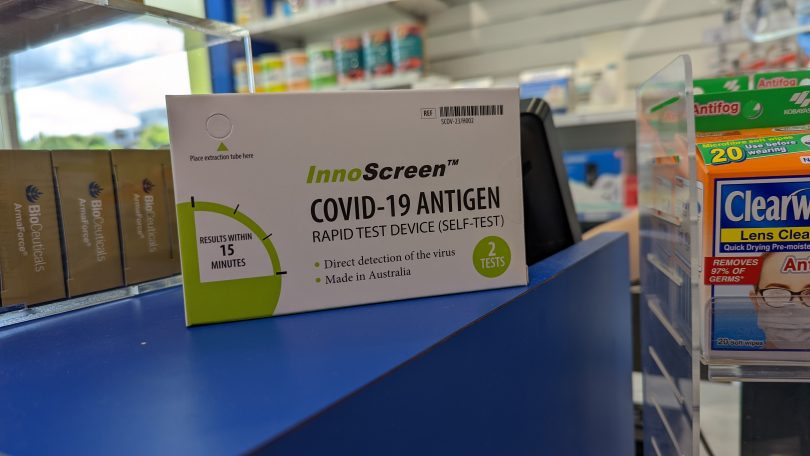 The ACT has recorded 549 new cases of COVID-19 in the latest reporting period. It’s the first day in over a week that the daily caseload has been higher than the previous days. Yesterday, 522 cases were recorded.

There are now 61 people in hospital, including one in intensive care who requires ventilation.

Yesterday, there were 64 patients in hospital, including one in ICU requiring ventilation.

Pharmacies and other stockists of rapid antigen tests (RATs) in Canberra are beginning to breathe a sigh of relief as demand is easing.

Students and teachers will be given two tests per week for the first four weeks of term.

He said this is making it easier for the general public to access RATS and for concession cardholders to receive their free supplies.

“Supply is still somewhat constrained, but certainly I feel somewhat like there are more tests available through pharmacies, and more patients are getting access to them,” Mr Blacker told ABC Radio this morning.

Hospitalisations remain steady at 2749. There are 170 people in ICUs around the state, down from 183 in the previous reporting period.

There are now 768 people hospitalised with the virus – down from 851 reported yesterday. Of the state’s 12-plus population, 93 per cent is now fully vaccinated, and 40 per cent of the state’s eligible population has received three doses of the vaccine.

My question is shouldn’t the prime Minister be here when there is a major issue like this new variant instead of galivanting all over the globe. There are major issues in this country that needs his leadership.

If this is as bad as they say then there is trouble coming. Cutting pandemic pay to casuals, RAT tests to pensioners will lead to more sick people not testing and mingling in public. I guess the only solution for pensioners is the more expensive CPR tests.