Ex-Canberrans Callum Padgham has been in touch to let us know he’s bringing his film “Frienddad” to Canberra for a Dendy Screening. From the facebook page:

Frienddad is an Australian made independent sitcom parody, which tells the story of Travis Little (played by co-creator Tavis Urquhart) who wakes up one morning to find that his best friend Cameron Biggs (played by co-creator and Canberra ex-pat Callum Padgham) has not only slept with his mum, but has now taken it upon himself to be the best dad that he can be. 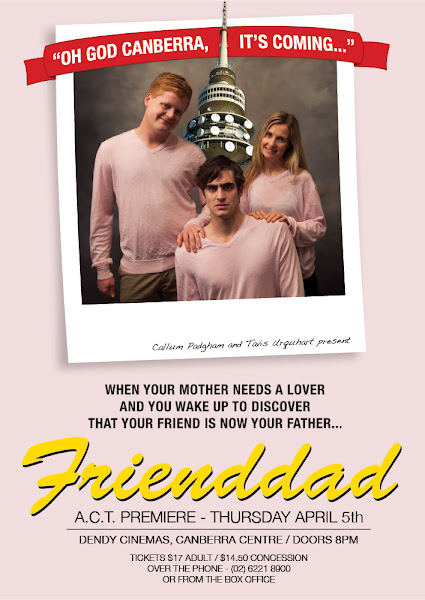 Paul Conn - 1 hour ago
Glenys is a great manager and one of the nicest senior colleagues I ever had the fairly brief pleasure to work with. View
Deborah Gale - 1 hour ago
A great boss and a nice lady. View
Karen Baldwin - 6 hours ago
Tania Parkes yep, me too View
Lifestyle 22

Megz Bites Inglis - 5 hours ago
I think they are both a head ache, pretty much going round in circles. I think Dean has the weaker argument here. View
Liam Grimshaw - 9 hours ago
I’m vegan View
Buddy Edwards - 10 hours ago
Dean Newman you have given me a migraine reading your words. View
Opinion 5

@The_RiotACT @The_RiotACT
Canberra's rock band Hands Like Houses is breaking free of their four walls for a national tour. We caught up with them on the road this week https://t.co/ojiymijMfp (59 minutes ago)