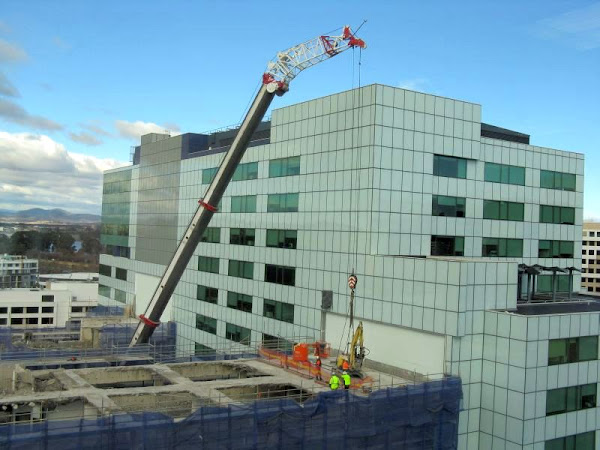 Following on from our earlier explorations of the ambitious demolition project on Akuna Street, John has sent in another big set of pictures.

Here’s the full slideshow of this set:

That alloy in the bovis office must have plenty of time on his hands to take pictures and send them to workcover and the union! He must be very carefull or he will have all those workers on the site coming up there and having a quiet word with him!

Can’t see anything that looks like a safety violation in the photos, can you? It’s actually interesting to see what’s going on, I had no idea they were doing so much chopping up of the old building. I thought they would just do a refit of the old towers and build a new curved section in the middle but it looks like they’re doing a much bigger job.

Lowering that backhoe into the cavity makes it look like a dinky toy!

Good job boys keep it up!

That alloy in the bovis office must have plenty of time on his hands to take pictures and send them to workcover and the union! He must be very carefull or he will have all those workers on the site coming up there and having a quiet word with him!

Debbie Crane - 28 minutes ago
Elroy Jones too old for that now. View
Elroy Jones - 7 hours ago
If you'd like to live in a rural setting then perhaps consider moving away from the city. View
Motoring 21

Byron Carn - 53 minutes ago
i don’t care what’s being built. It’s just always suss to me how many projects these guys keep getting View
Ashley Wright - 1 hour ago
Byron Carn if you are so worried how about you stump up the money to buy the property on the open market and building somethi... View
Ashley Wright - 1 hour ago
Robert Honeybone Snr have you seen what is there now? The picture is in the article. It’s a rundown slum now! View
Community 13

Ken Chau - 2 hours ago
Why Dickson?! How about O’Connor or Ainslie? View
Alex Elliott - 4 hours ago
How can Braddon and Dickson get $14 million combined and the single bus depot building get $6.5 million. I'd like to see how... View
Ian Daun - 15 hours ago
How about replacing the letter boxes that have been removed. View
News 24