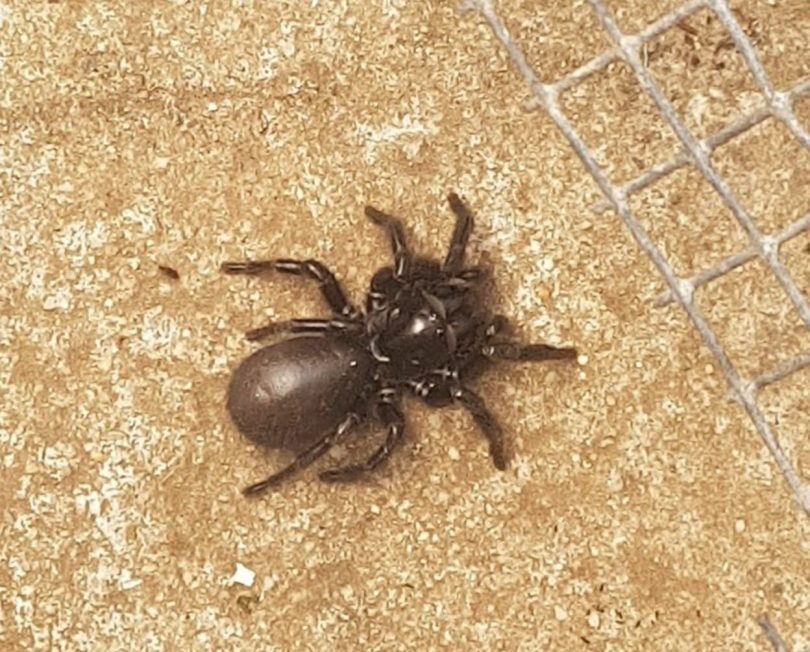 What would you do if you found this funnel-web spider in your backyard, just as Holly Catt did on 16 January? Photo: Supplied.

A Goulburn woman was shocked to find a funnel-web spider in her backyard on Saturday, 16 January.

Holly Catt says she was terrified to find the 4cm to 5cm spider inside a tarp covering her lawnmower, near to where her young children play.

“It fell right next to my foot,” she says.

The mother removed the spider before turning to the Goulburn Region Spider Seekers Facebook page to confirm the species.

An administrator of the Facebook page and Goulburn-based spider expert Ben Shoard says by the look of the photo, it was a female Blue Mountains funnel-web, which can range from 1cm to 5cm in size.

While there are three known funnel-web populations in Goulburn, only one or two people report finding a funnel-web spider to the Facebook page each year, says Ben.

He says it’s also unusual for female funnel-web spiders to leave their burrow.

“They generally keep to themselves,” says Ben. “The ones you do see are often the males in search of females at this time of year. 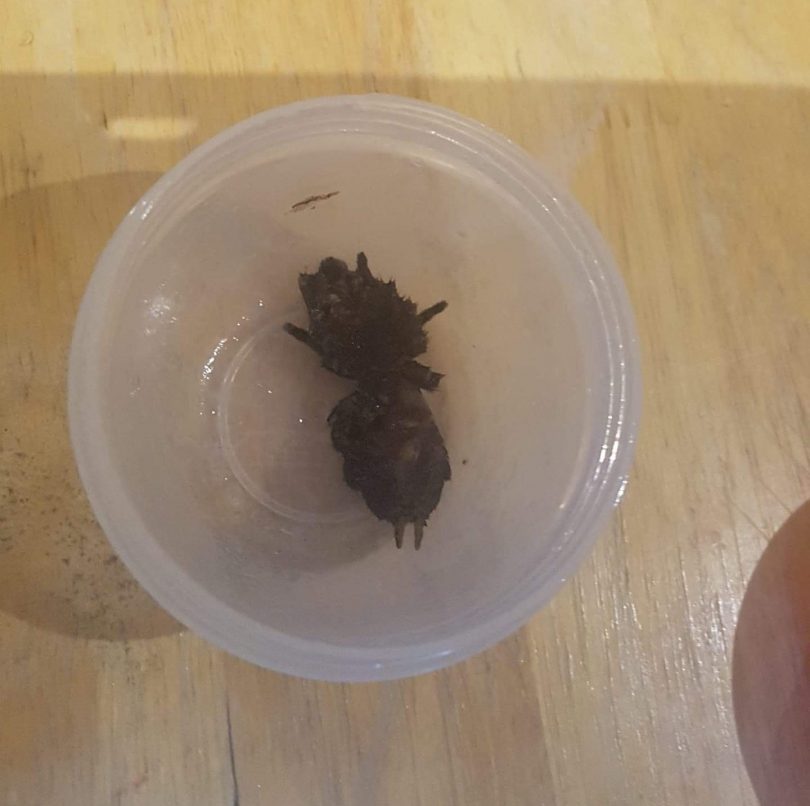 The underside of the funnel-web spider that Holly found. Photo: Supplied.

“The reason people sometimes stumble across them is because the spider is confused and lost; they’re wandering in search of a female and accidentally wander into someone’s house.”

Despite being called a Blue Mountains funnel-web, these spiders do range much further than the NSW Blue Mountains and can be found in the Sydney Basin, Hunter region, Central Coast and South Coast. However, Ben was surprised to learn they live in Goulburn when he moved to the city in 2012.

“My general advice is to treat anything you think is a funnel-web as one until you’re told otherwise,” he says.

Funnel-web spiders are among the most dangerous spiders in Australia. Their venom is highly toxic and can be dangerous, yet they aren’t a threat to dogs or cats.

Ben says humans are a bigger threat to them.

“From a funnel-web spider’s perspective, we are about 400 to 500 times their size and their venom as a defence is quite poor because by the time the venom has kicked in, we’ve already killed the spider,” he says.

Ben grew up with a love of animals, but particularly invertebrates and those that people tend to dislike.

The qualified teacher uses the Goulburn Region Spider Seekers Facebook page to educate people about local spiders, and he volunteers as a snake catcher with the NSW Wildlife Information, Rescue and Education Service (WIRES).

“Funnel-web spiders can take five to six years to mature and can live for 20 years so it’s a shame if they are killed,” says Ben.

He has also been using the page to research spider species in Goulburn and has a collection of spiders that will be on display at Goulburn Show on 6-7 March.

A funnel-web spider, an equally venomous mouse spider, which Ben found in his backyard, redbacks and house spiders will all be on display. Ben will also be on hand to talk about local spiders and answer any questions.