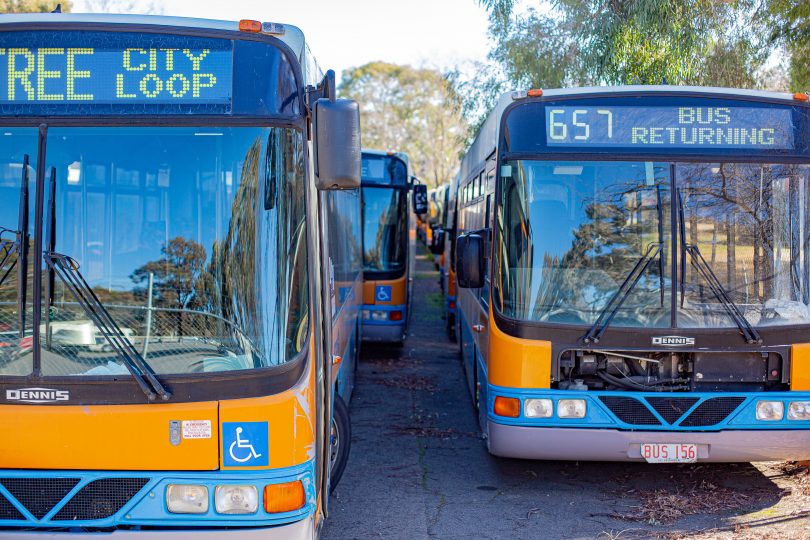 This is where Transport Canberra’s old orange buses go to die, before being disposed of.

The ‘departure lounge’ in Fyshwick is home to about 30 buses aged between 20 and 28 years old that have seen better days.

The buses have attracted the attention of passers-by who have been wondering why they are there.

Transport Canberra said the Government-owned site on the corner of Canberra Avenue and Lithgow street where they are stabled was previously vacant land.

The buses, which also do not comply with disability requirements, had reached the end of their serviceable life and been replaced by the modern fleet of Euro VI diesel buses, it said. 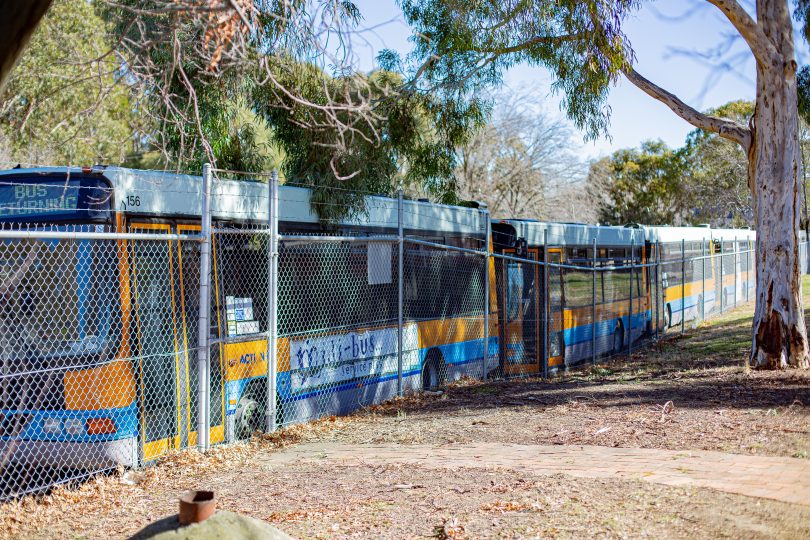 The ‘departure lounge’ in Fyshwick.

A spokesperson said the buses were kept there so they did not crowd operational depots already under pressure.

“The fleet has been increased recently to provide additional services in the new network. A new depot facility is currently being scoped for Woden,” the spokesperson said.

But until the Woden depot is built, buses are being parked in layovers near the former Woden police station.

Transport Canberra did not say how long the buses would be at the Fyshwick site, saying it will continue to be used to ‘transition vehicles from in-service to disposal’.

“The buses are moved through the area as they are decommissioned from service,” the spokesperson said.

Sure let’s give the homeless a reason not to get back on their feet give them a warm bed and a place to go every night, sure let’s incentivise something for the homeless but this is not the way...

The little ones they used for the city loop were cute tho.

Maybe these could be fitted out for the homeless??

Evelyne Carne it can be paid for from the CEO sleep out,which gets ALOT of donations (millions):)

Mobile homeless shelters must be one of the dumbest ideas I’ve heard in a while. I guess people don’t these buses are being parted out for a reason, this reason being that they don’t work anymore, they’d be constantly breaking down because they’re decades old. Is it really that hard just to build homes for homeless people? Better yet, build an extra wing within the AMC for people drug and mental health issues until they become functioning members of society. These old buses are far too small to house anyone decently and with privacy. They have terrible weather protection, it’s either freezing cold or a 1000 degree hot box with no air-conditioning. Despite this, some individuals think cramming people with mental illness and drug problems into old, smelly, horrible claustrophobic conditions like this would be a great idea.

20 years? obviously you have not owned a Ford. Some parts you are lucky to get after 10 years.

Well to be fair the FG started in Feb 2008 so the youngest BF sedan is now 11 years old. I believe the law says they have to keep parts for cars up to 10 years old. So you could probably get a tail lamp for a BF wagon.

Some were sold some years ago few converted to campers seen one at fyswick caravan park. Few at pickels auctions. But they wanted too much for them ???$$$%

yeah i think if they were to sell them, they would big $$$ for them. You could possible find one converted already for less

Simon Whittaker my neighbor. Brought one for $12000 with spares , turned in too a camper,

They should be repurposed for homeless people to sleep in.

Does anyone know if they could they be available to buy and repurposed?

2nd, one of Midi bus would be cool

Karl Hock Thanks I didn't know.

Wonder when the buses are going electric?

There was talk about electric buses.

they already have one northside,

Still a lot around.

why can't they park them near where homeless people sleep, at least they would be out of the wind and rain

Ota Save - 22 minutes ago
Sue Sutton No worries Sue. Happy to help ❤️ View
Sue Sutton - 1 hour ago
My Mum has wonderful neighbours who have been helping keep her lawn in check. Thank you Ota and family xx... View
Bill Gemmell - 2 hours ago
Barbara Eglitis I was wondering how long it would take. Seriously, I had the Fowles St Park project in Weston in mind. Sugges... View
News 33

purplevh - 23 minutes ago
If a dog ever chased me on a bike I would turn around and chase it. They soon get the message when that happens.... View
purplevh - 27 minutes ago
I like your point about heavy vehicles but the same goes for a motorcycle licence BECAUSE you are the one most likely to be h... View
Opinion 13