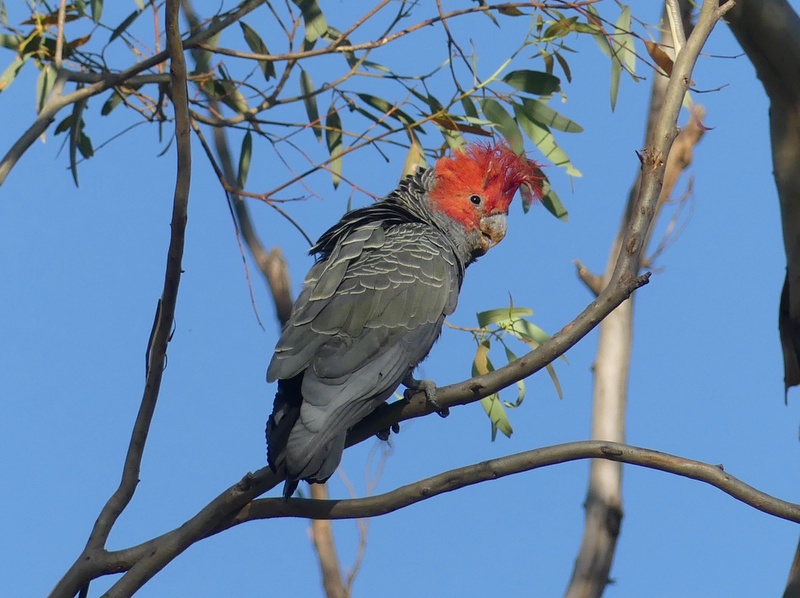 On 2 March one of Canberra’s favourite birds, and our territory emblem, received recognition. But for all the wrong reasons.

Based on the recommendations of an eminent scientific committee, the glorious gang-gang cockatoo has shockingly been declared `Endangered’ at a national level. Its listing under ACT legislation will automatically follow.

This means it’s “facing a very high risk of extinction in the wild in the near future” – a terrible thing to contemplate. Extinction of a species happens only once, and is forever.

We should celebrate the gang-gang while retaining hope the plummeting numbers can be reversed. The idea of a world, and a Canberra, without this delightful little ash-grey cocky with the red head and wispy clown’s hat (males only), is unimaginable.

We don’t know why it’s in such trouble, though the loss of incalculable numbers of old hollow breeding trees to fires in recent years and climate change are heavily implicated. The mystery seems somehow appropriate because despite their familiarity, there is so much we don’t know about gang-gangs. 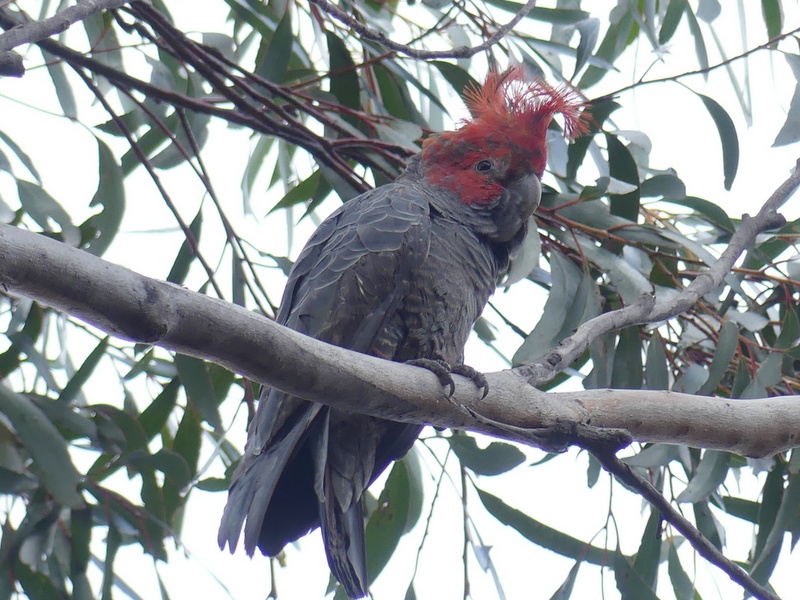 A young male gang-gang, his head just in the process of turning from grey to red. Photo: Ian Fraser.

Gang-gangs are one of the best reasons to live in Canberra, and indeed this is the only city in the world where they can be seen readily and regularly throughout suburbia and even in the city centre. They are the second-smallest cockatoo (after cockatiels) – and there’s not a great deal more we can say with certainty.

When John Gould was producing his monumental work on Australian birds in the 1840s, he included detailed information on nearly all species. But for gang-gangs, all he could do was plead for information readers might have.

Even the name is something of a mystery. We can be certain it’s from an Indigenous word, and reflects the bird’s croaky-creaky call, but we don’t know from which language.

Charles Sturt used the name “gangan” when reporting on gang-gangs he saw near Mittagong in 1833. Because Sturt already recognised the name, it’s presumably from a coastal language.

Most of the few bird names of Indigenous origin – currawong, budgerigar, kookaburra, corella, galah for instance – became established in English well into the 20th century. So it’s interesting “gang-gang” (along with “boobook”) was accepted pretty much from the start.

Most earlier mentions of gang-gangs refer to shooting expeditions. The gang-gang was generally scorned as not worth wasting powder and shot on (presumably they tasted bad). But of course that didn’t stop people from shooting them. 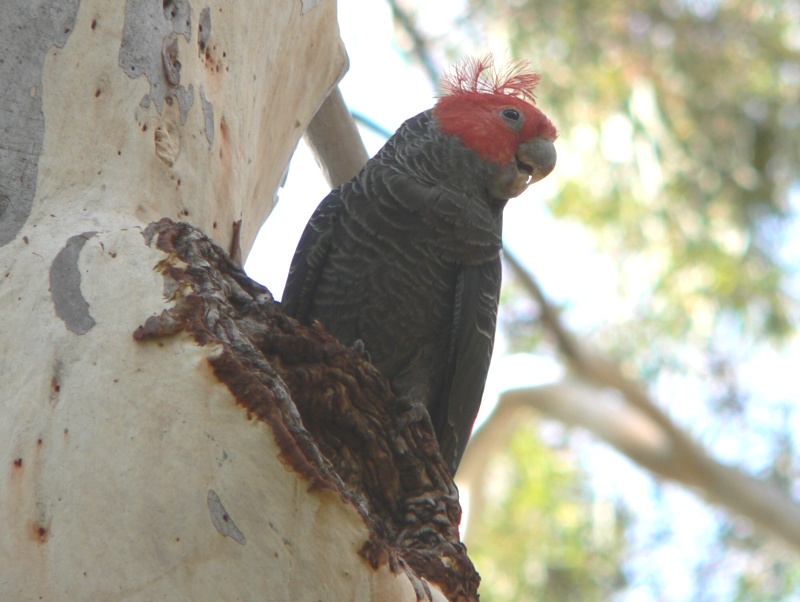 One fascinating aspect of gang-gang behaviour is their liking for spitfire larvae, familiar wasp relatives, which munch on eucalypt leaves. Spitfires are poisonous to most birds because they store toxic oil from their food and regurgitate it to repel predators – hence the name.

A gang-gang will pick up the caterpillar, nip out the poison-holding sac and drop it, then munch on the unfortunate larva. Perhaps they’re a bit like eucalypt lollies, though wriggly and bristly.

Gang-gangs breed up in the mountains and come down to Canberra in autumn. Here they are happy to substitute exotic street tree fruits and cones (Roman cypresses are popular) for missing native food. They will often feed quietly at head level, allowing us to approach quite closely.

Such trees were widely planted in the older Canberra suburbs, so they’ve been an urban bird here from the early days of our city.

It’s been the emblem of our Parks and Wildlife Service through many name changes. Even when one senior manager tried to get rid of it to eliminate the separate identity of the environment section, the reaction from staff and public forced a retreat.

I’ve never met anyone who thinks the gang-gang isn’t an appropriate bird emblem to represent our city and community (and yes, I’ve heard and smiled at all the cracks about galahs!).

Now we must do all we can to ensure they’re still bringing a smile to our grandchildren and their grandchildren, long after we’re gone.

Ian Fraser is a Canberra naturalist, conservationist and author. He has written on all aspects of natural history, advised the ACT Government on biodiversity and published multiple guides about the region’s flora and fauna.

I’m elated to report they have returned to the Wanniassa Hills nature reserve and adjoining suburbs after an absence of some 10 years.

Unfortunately the Currawongs that have taken over the area are trying to chase them away.

We need a Currawaong cull.

My guess is that they are being pushed out by the ever-growing and aggressive gangs of sulphur crested cockatoos.

This is why we need Lizzie to take all her introduced species back.

A good way to control possums might be to restrict their mobility.

Our telephone. internet and power cables from a ‘possum highway’ across Canberra.

Would it be possible to make the cables difficult to cross?! I expect that might reduce their breeding opportunities!

Many Canberrans have an irrational distate for the trees that the Gang Gangs need to thrive, dismissing them as “Widow Makers”, and either actively removing them or planting smaller imported trees in preference. The treeless recently established suburbs can’t be helping either. How many old eucalypts have been removed so that those suburbs can be built?

The result? Stiff competition for those tree hollows from other birds and possums. The Gang Gangs may be losing the contest.

Everywhere endangered outside my backyard during fruit season.

Good point, Sam. Not everything is about the catch-all of climate change, which is very big and woolly and handily defers problems, for the glory of net zero 2050. Some things are just about too many humans disturbing ecology and habitat.

We need to be real about what is contributing to their decline. According to the latest study, brushtail possums were the single biggest threat to Gang-gang nests, overrunning 30% of nests observed within 2 weeks. Sorry to pick on another native animal but they have absolutely no natural predators and need to be culled just as we do for Eastern greys.