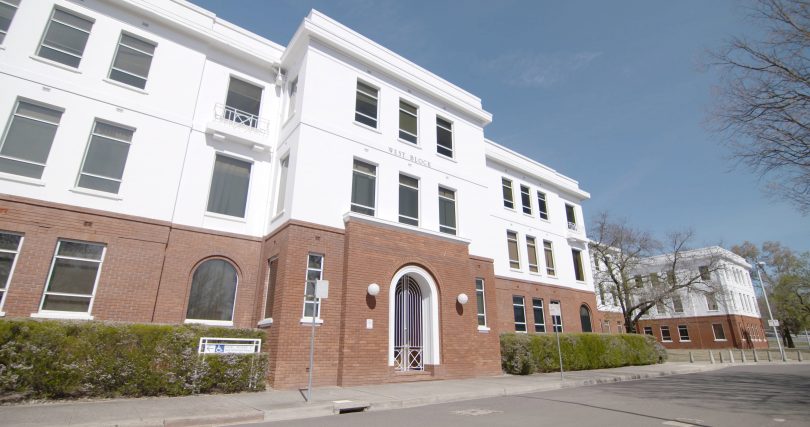 Canberra developer Geocon will convert the historic West Block buildings in front of new Parliament House into a luxury heritage hotel after buying the site for $6.25 million from the Commonwealth.

Geocon Managing Director Nick Georgalis said his company was one of the few developers in Australia with the capability and credentials to undertake a sympathetic adaptive re-use of West Block.

“The new hotel will celebrate the heritage aspects of the buildings, inside and out, and, for the first time, open up these historic structures to the public,” Mr Georgalis said.

“Given its location and history, this hotel has the potential to be talked about all over the world, to be one of those ‘must-see’ icons when people visit Australia’s national capital, like Raffles in Singapore or the George V in Paris.”

West Block was designed by John Smith Murdoch and Geocon said Fender Katsalidis were the only living architects to have converted a John Smith Murdoch building into a hotel, through their work reimagining the former Acton House into The Diamant Hotel, NewActon (now Peppers Gallery Hotel).

“I want to dispel the concerns of those worried about the future of these buildings,” said Mr Georgalis. “We are very excited to have the opportunity to create another unique property which both preserves and celebrates important aspects of Canberra’s early history, and we take this responsibility very seriously. We also want Australians – the original owners of this property – to have maximum opportunity to enjoy its history and significance, as they are able to do with the re-purposed Old Parliament House.”

West Block was one of the earliest buildings erected in the Parliamentary Triangle of the new Federal Capital. It opened for government use in 1927 as part of the Secretariat buildings and was once home to the National Library, the Crown Solicitor’s office and the Australian Electoral Commission. It is currently vacant.

Part of the site, known as The Dugout, was a World War II bomb shelter, which was used to code and decode messages between Australian Prime Minister John Curtin and British Prime Minister Winston Churchill.

“We haven’t been inside The Dugout yet, and we can’t wait to get in there to see what sort of amazing atmosphere it has, potentially for a bar or other purpose that embraces and shares its historic features with visitors,” Mr Georgalis said.

“I was interested to learn that the architectural nature of these buildings was quite different from the buildings envisaged for the Parliamentary Triangle by Walter Burley Griffin, the American architect who won the international competition held in 1912, for the design of Canberra. They are, nonetheless, fine examples of Federal Capital Architecture, a version of the Inter-War Stripped Classical style, and exhibit classical-style proportions and features of arcaded entrance screens and courtyard arrival points. These wonderful heritage aspects will be central to the re-development, as will the interior references to government and political life in Australia at the time.”

Geocon owns and operates the Abode Group of hotels. The company said West Block would be one of the first of the new ‘deluxe’ offerings the group would bring to Canberra.

“Delivering another world-class, luxury property will enhance the range of up-scale hotel offerings in the ACT, in addition to Geocon’s recent announcement of a luxury hotel to be built in the CBD at 70 Bunda Street,” Mr Georgalis said.

“There could not be two more divergent properties in terms of look and feel, however what they will both do is deliver an unprecedented level of luxury to the hotel market in Canberra, and help meet the demand for top-end accommodation, particularly catering for the increasing number of international travellers.”

ACT Liberal Senator Zed Seselja welcomed the sale, saying it was part of the Government’s ongoing efforts to ensure the Commonwealth’s property portfolio is appropriate for expected future needs and maximises value for taxpayers.

Heritage values would be protected through covenants and provisions included in the Sales Contracts and Crown Leases.

“This is a great outcome for Canberra. Opportunities to revitalise the Parliamentary Triangle should be embraced.” Senator Seselja said.

“West block has been vacant for a number of years, so to have this refreshed and used for boutique accommodation while still maintaining its heritage facade is a fantastic
outcome.”

I’m glad about this development. Canberra has very few upmarket hotels/motels and this one in the Parliamentary Triangle is long overdue.

I remember when we moved back to Canberra in 1970 the Hotel Canberra on Commonwealth Ave. A few years later the federal government put public servants in there, it was apparently purchased by the Whitlam government. I remember thinking that it was such a shame it had come to that. A grand part of Canberra’s heritage being misused in this way. Years later another government moved the public servants out, it was sold, restored as a hotel and is now one of the jewels in the Canberra crown.

West Block is one of those heritage buildings that has also been misused over the years and never reached its full potential. Now there is hope that it will finally be a good, functional building for both locals and tourists. A nice restaurant where we can go for Christmas lunch, a classy hotel where tourists can stay and inject funds into the local tourism sector.

Other buildings mentioned in the article could also be transformed in this way. When I was in Army I worked in Anzac Park West and looked across the road at the former BMR building lying vacant and thinking how good it would be to open it up to the public in some way. 27 years later it looks like that may happen. This is part of Canberra’s evolution from being the big country town of the 1970s and ’80s into a truly international capital city.

Mat Kenna - 7 minutes ago
Alex Troy Elsworth Adkins it's the new additions, Forrest has been in the list for about 10 years. View
Michael Bourke - 18 minutes ago
Mark Dowell Farrer, we made it. I bought here 20 years back.... View
Nigem Hamedeh - 24 minutes ago
99% sure every suburb has million dollar homes …. View
Community 37

Deb Batt - 13 minutes ago
Wonderful View
Dee Kaden - 27 minutes ago
What about men that are homeless??? Anything similar for them? View
Mark Heinrich - 2 hours ago
These things are not either or. There’s a need for multiple solutions to multiple problems. Don’t knock something just be... View
News 116

Brian Rutherford - 16 minutes ago
Mark Newman you realise this isn’t an ABC page right?🤦🏻‍♂️🤦🏻‍♂️🤦🏻‍♂️ View
James Forge - 20 minutes ago
Change that stupid rule about cyclists being able to ride across a pedestrian crossing. At least mandate it so that the cycli... View
Brian Rutherford - 30 minutes ago
Warren Curry a sticker the size of a postage stamp and that you can’t read in one go because most of it’s obscured? They... View
Community 43

Steve Whan - 52 minutes ago
Just curious, do instigators of damage have their terms effected due to vandalism caused? I dont know. Just curious. View
Inca Serrated - 2 hours ago
Not a single mention of the conditions that prisoners are living in... Lockdowns, no family contact for over a year, no meani... View
Lori J Tas - 4 hours ago
Kriso Hadskini there are currently rules around how much the govt can enforce people to pay back week to week, sadly, given h... View
Lifestyle 14