14 May 2019 | Emma Davidson
Start the conversation 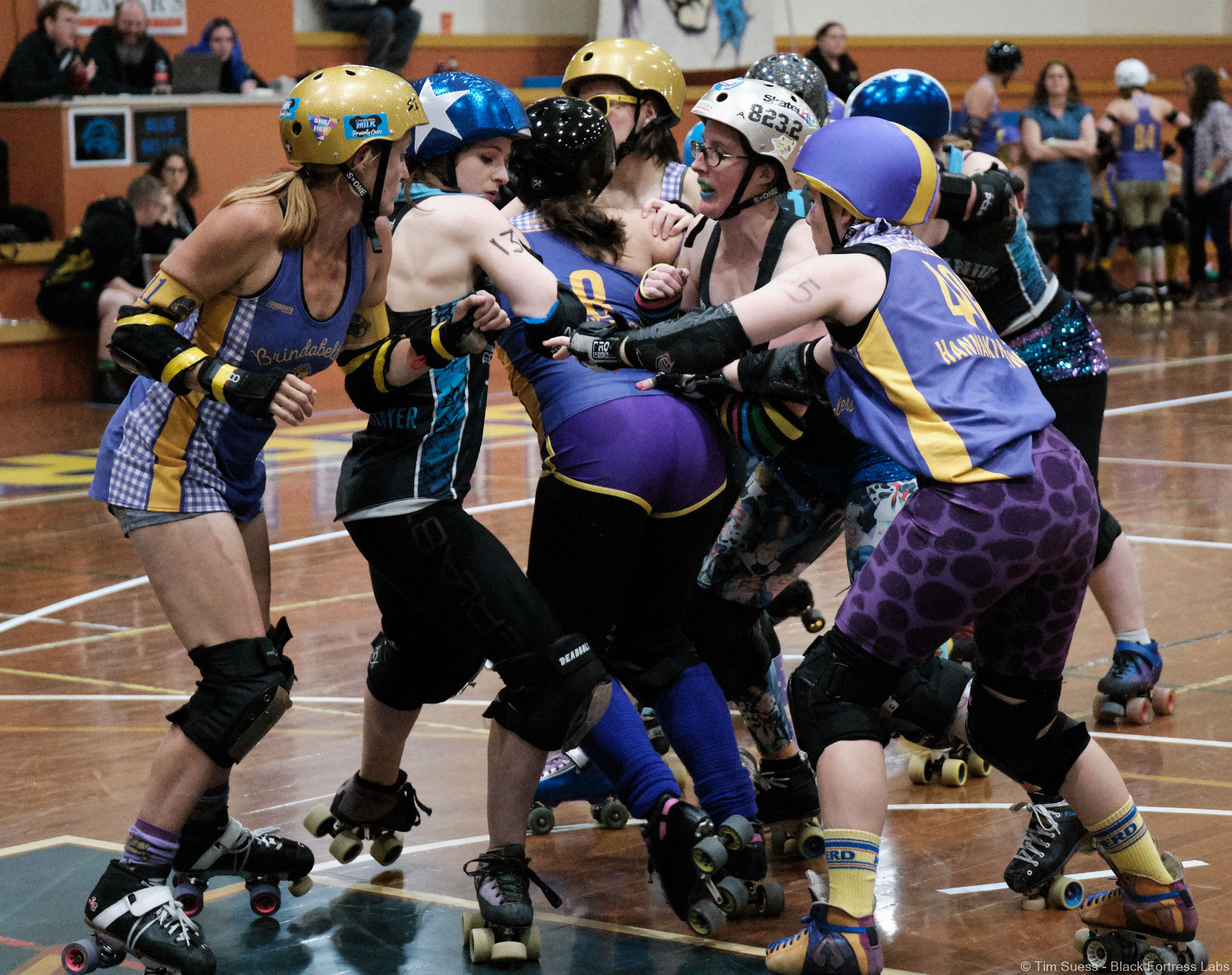 Black and Blue Belles vs Brindabelters roller derby game on 11 May 2019 in Canberra. Photos: Tim Suess.

Saturday night’s Canberra Roller Derby League game between the Black and Blue Belles and Brindabelters was a show of the league’s skill. With low scores on both sides and less than one power jam’s scoring potential between the final scores, fans were treated to a display of skilled defensive play from all players on the track.

Although the Belters had won 2018’s grand final in the Canberra Derby League home team season, they were not assured of victory coming into Saturday’s game. The Belters have won more than their fair share of wooden spoons since the team was first formed, while the Belles have a proud history as winners. With a number of experienced players not in the night’s lineup, and another just back from injury, it was bound to be a tough game.

But the relatively low penalties and low scores compared to previous seasons showed both teams were playing at a high level of maturity as derby skaters. Mistakes were hard to find, which meant fewer opportunities for either side to get out front and score.

The Black and Blue Belles still managed to make lead jammer on about sixty per cent of jams, enabling them to control play and keep a low-key rising score while preventing the Belters from getting anywhere. Occasionally the Brindabelters jammer would spit out of the pack first and manage to score a few points, but next jam would see the Blue Belles resurging to score even more.

The exception was in the final four jams of the first half, where the Belters’ offensive play dominated for a collective 21 points while the Belles scored nothing. They even came back to win lead in the first jam of the second half, taking the points lead from the Belles. But the agility of Mae Q Sqweel, Hell Nino, and Freudian Slit meant the Blue Belles soon regained position and slowly widened the points gap.

Both teams showed the benefits of many hours of training in three blocker formation, with players bracing against each others’ shoulders to form an impenetrable triangle while the fourth blocker tried to prevent the opposing jammer sneaking around the outside. What looked like an attempted apex jump in the first half got the attention of spectators, but fast-moving blockers meant the landing didn’t stick and resulted in a penalty instead of fame and glory. 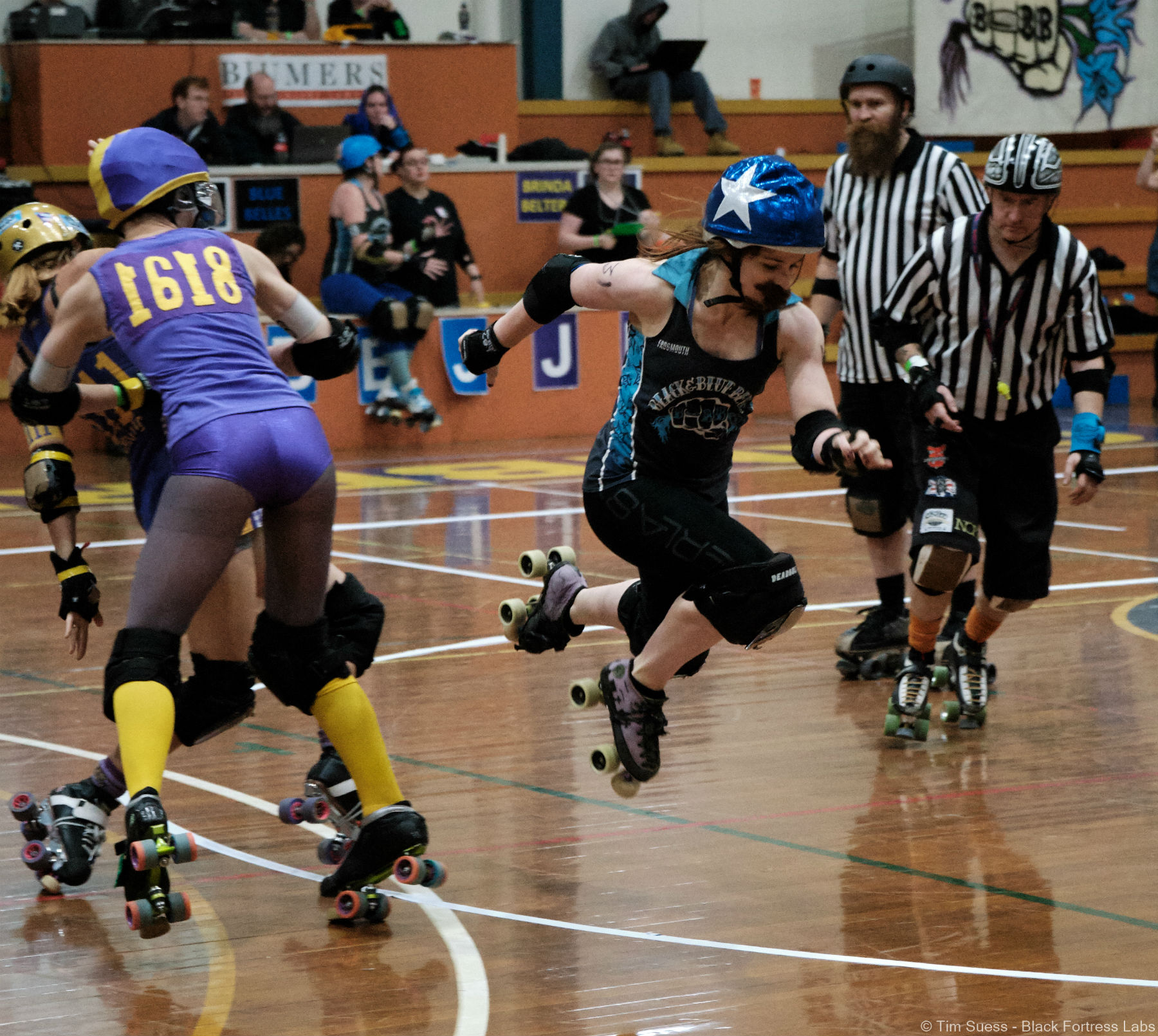 The key to the Blue Belles’ win was the diversity of experienced jammers with a willingness to take a razor-thin inside line past the pack, or the agility and strength to weave by blockers in a group formation. While the Brindabelters had borrowed star Red Bellied Black Hearts jammer Bambi von Smash’er for the night, and Lemmy Atom was consistently strong, it wasn’t quite enough on the night.

The constant pushback on attempts to break through should have seen the Belters fatigued into giving up towards the end of the second half. Their persistence meant that even in the last jam, with a thirty point gap to make up, the Brindabelters were still chasing a win. The final jam saw Belters jammer Pink Mist claim lead and score 13 points. She was about to make another pass on the outside of the pack when Belles blocker Kink Panther floored her, breaking the hearts of Belters fans and ensuring the Belles won 151 points to 134.

When asked after the game, Kink said she “saw Pink coming around for her usual outside line, and I thought ‘not tonight!'”

The next Canberra Roller Derby League home season game on June 15 will be played at Southern Cross basketball stadium in Tuggeranong from 6:30 pm.