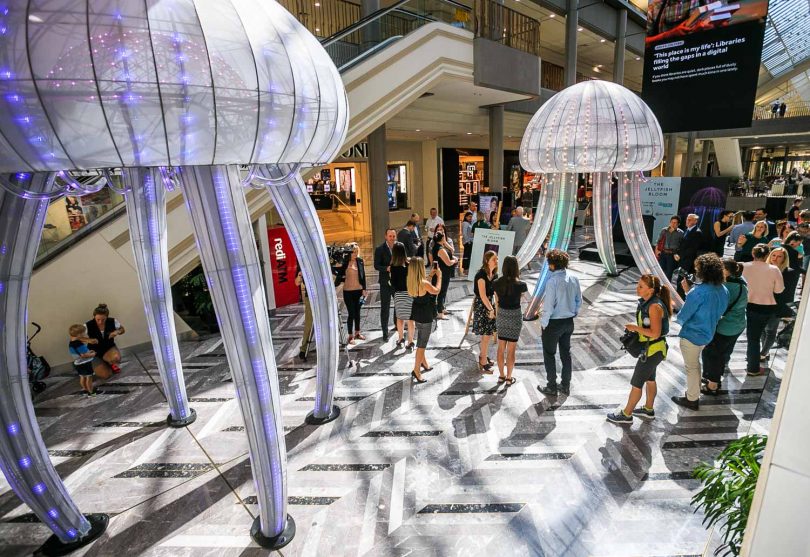 Giant interactive jellyfish have invaded the Canberra Centre and the Parliamentary Zone in preparation for the 16-night Enlighten Festival which will be officially ‘switched on’ at 8 pm tonight at the National Library of Australia.

The supersized sculptures which flash when they sense human presence are among a host of new attractions ranging from glow-in-the-dark donuts to a massive Card Castle collaborative art project which are expected to make Canberra’s eighth Enlighten Festival bigger and brighter than ever before.

This year’s extended program of free and ticketed events and activities includes two new events precincts – Canberra city and the Australian National University – and has been extended to include some of Canberra’s most popular autumn events – the Canberra Balloon Spectacular, Symphony in the Park, Lights! Canberra! Action! Canberra Day and Hit 104.7 Skyfire.

The giant Jellyfish Bloom installations are among a number of artistic illuminations and activities in the city centre as part of the festival’s extended footprint.

“We really want people who are visiting Enlighten this year to also visit the city centre after dark to see it in a whole new light,” said City Renewal Authority director of design and place strategy, Andy Sharp.

“As well as interacting with the fantastic Jellyfish Bloom here at the Canberra Centre, which can be enjoyed day and night, the City Renewal Authority has organised some fabulous installations and light-themed activities throughout the city centre for people to enjoy after dark.”

Some of the other new and interesting additions to this year’s Enlighten Festival are detailed below and you can also click here to see The RiotACT’s guide to the Top 10 not-to-be-missed events. 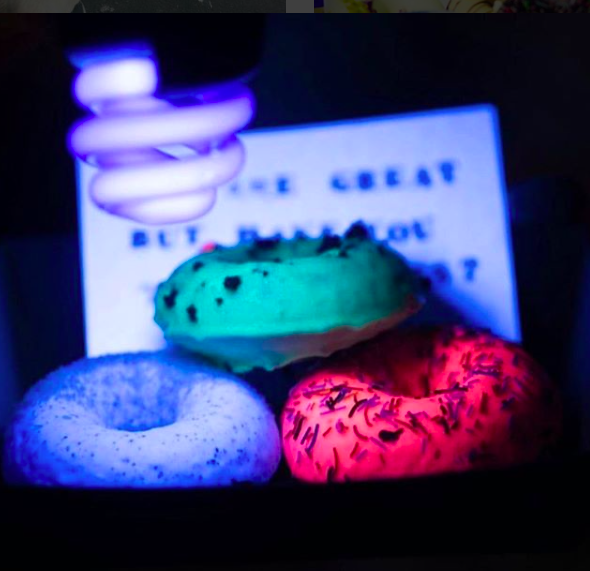 Delicious ‘glownuts’ will be part of Enlighten 2018. Photo: Supplied.

Glow-in-the-dark donuts promise to be among the fun foodie drawcards of this year’s Enlighten Festival.

Made by Sydney-based vegan and gluten-free donut shop, Nutie Donuts & Dessert Bar, the striking ‘glownuts’ will be among the offerings at the new Enlighten Alley, situated within the Parliamentary Triangle.

Nutie’s tasty treats will be sold tonight and tomorrow night (March 2-3) from 4 to 11 pm and also from March 9-10 at the same times.

Nutie will also have a range of their other donuts with them, including the popular Golden Gaytime Donut Bomb. 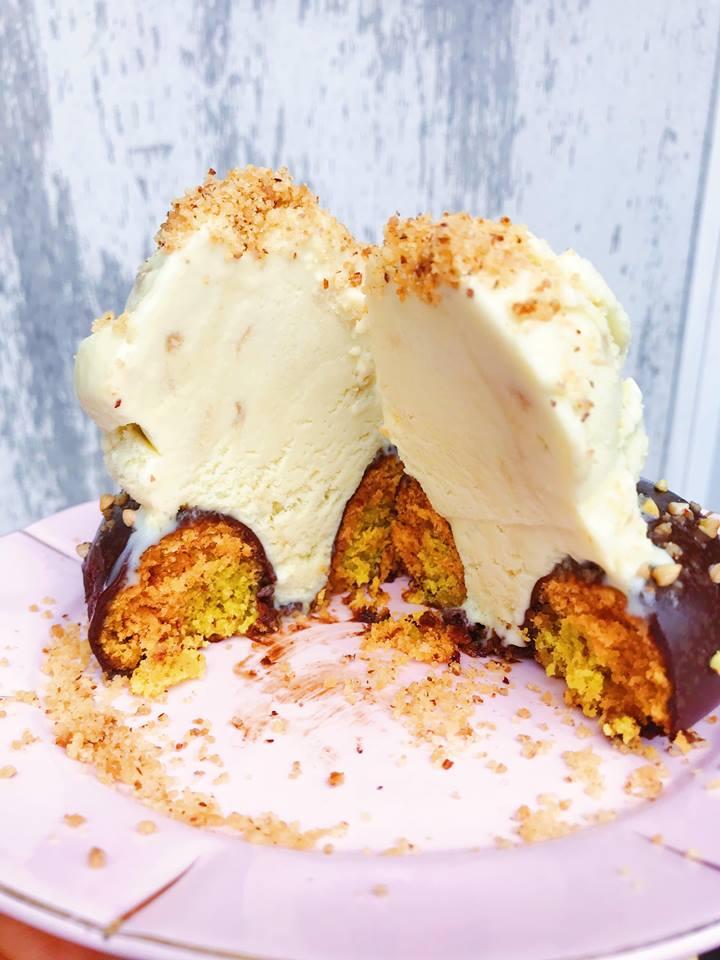 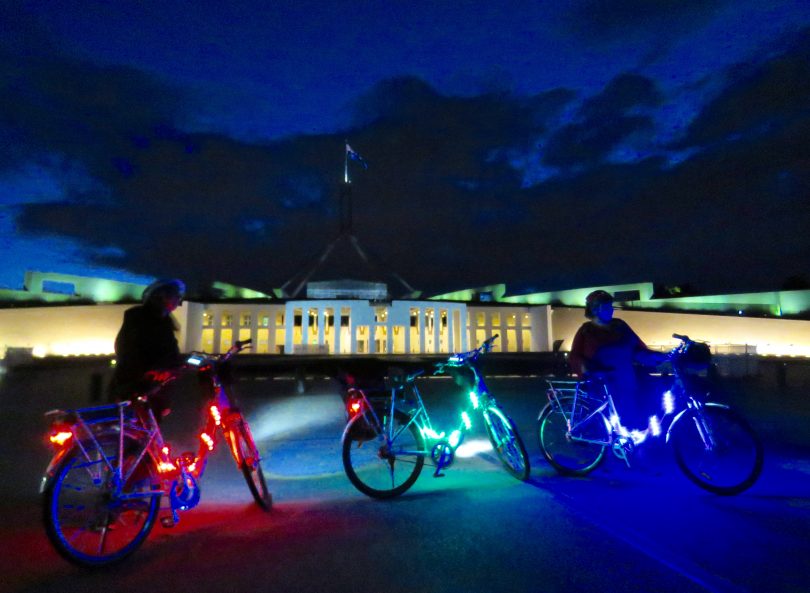 This year, Canberrans can go on one-hour evening electric bike trips around central Lake Burley Griffin and atop Capital Hill to watch the night come alive with colour during the Enlighten Festival.

The Canberra Urban Adventures tours on e-bikes (dressed up with LED lights) will depart from Parkes Place West (Questacon car park entrance) at 8.30 pm and 9.40 pm each night from tomorrow (Saturday, March 3) until Sunday, March 11. Cost is $35 per person (12 years and over) or $15 for children 6-11 years.

During the Canberra Balloon Spectacular, there will be two-hour pedal kayak cruises to watch dawn break over the lake and see the hot air balloons soaring above.

The kayaks are hands-free, making it easy to take photos of the balloons. Included in the cost is a break by the lake to enjoy juice, water, fresh fruit and nibbles.

The kayak cruises leave from the Lawson Crescent jetty next to the National Museum of Australia car park at 6 am each day from Saturday, March 10 to Sunday, March 18. Cost is $75 per person (12 years and over) and $36 (children aged 6-11). 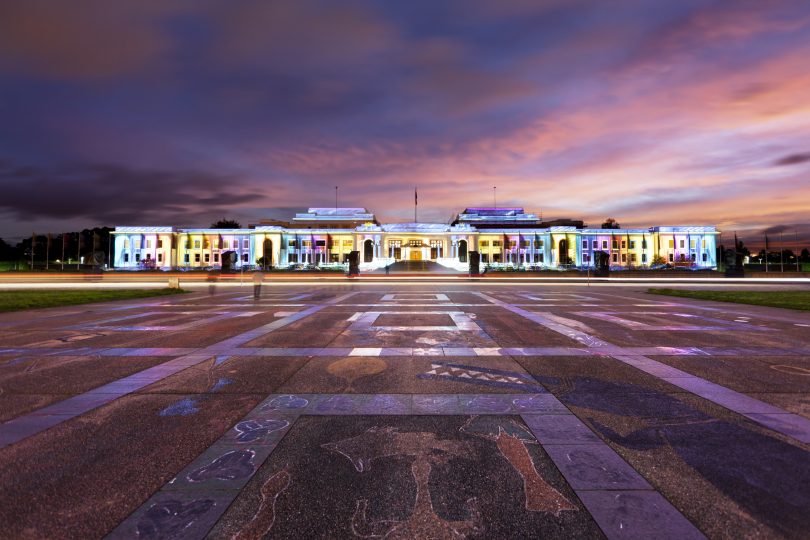 Old Parliament House will be illuminated by spectacular projections and house a towering Card Castle during Enlighten. Photo: Supplied.

A towering collaborative all-ages art installation will be built card-by-card by visitors to the Australian Museum of Democracy during Enlighten – starting tonight (March 2) and continuing on Saturday, March 3, Friday, March 9 and Saturday, March 10 from 6-11 pm.

Visitors to the Card Castle installation in iconic King’s Hall will be able to share words, stories and images on cards that speak to the themes of hope, diversity, curiosity, kindness, courage, community and trust.

Card Castle will be the fifth in a series of collaborative art installations created by MoAD’s visitors each year during Enlighten.

Last year’s program, For the Record, attracted over 17,000 visitors across four evenings, with similar crowds anticipated for 2018.

MoAD Director Daryl Karp said the evolving Card Castle will be a metaphor for democracy.

“In a tumultuous year across the globe, we are inviting the public to contribute stories that highlight the best of our humanity. Their voices are the glue of democracy and will create the scaffolding for the Card Castle,” she said.

On the same four nights visitors can participate in the installation, they can also explore the museum after dark with late night openings of galleries, exhibitions and the Terrace Café from 5 pm until 11 pm.

The façade of Old Parliament House will also be illuminated by spectacular projections as part of the festival.

Stuart Green - 43 minutes ago
Scott Bell Thats obvious, they'll light us up for more on the other 4 days... View
Community 14

astro2 - 53 minutes ago
If you would prefer to take your own private motor vehicle to the shops then you may continue to choose to do so. However the... View
Deborah Gale - 2 hours ago
Flannie! View
Douglas Ryan - 5 hours ago
Bruce Rossel flanno everyday to become a thing View
News 2

Peter Curtis - 12 hours ago
How is that the Libs can take the incumbents on from the left? They raise real issues. View
Motoring 30

whatwik - 15 hours ago
Shock, horror! - it's true! The NSW Liberal Party wants "to charge up the Nation and make NSW the Norway of Australia when it... View
show more show less
*Results are based on activity within last 7 days

@The_RiotACT @The_RiotACT
They rescued their cattle from the #Braidwood bushfires only to lose their home and herd in the floods - but Peter and Tracia are soldiering on https://t.co/4porXDUR3I (36 minutes ago)