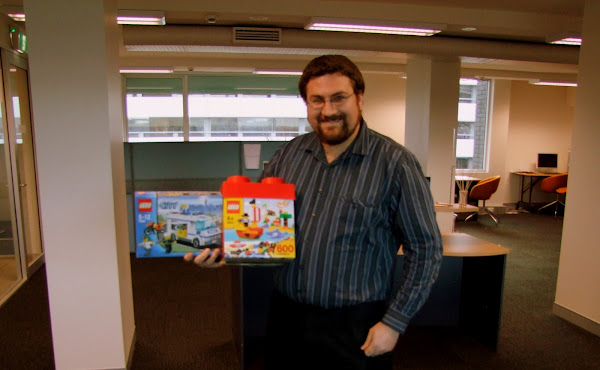 The Lego Challenge is coming to the end of phase 1 (Lego acquisition) with the Pirate Party getting in thanks to Glen Takkenberg.

Glen brought a big box of basic blocks and a cops and robbers set.

So far the donating tally is Two Liberal, Four Labor, Two members of the public (Thank you Ayrton and Penelope), One Green and one Pirate (Boo Bullet Train!).

Sorry neanderthaisis, I looked around for any pirate sets, but the classic 80s pirate Lego doesn’t seem to exist any more.

The stuff I dug up from the garage and donated is mostly 80’s pirate Lego, you’re welcome.

Careful – ‘snigger’ is an anagram of ‘gingers’, and some people take offence to that.

And I Just have to point out how the Pirates are relatively late in joining the party. A bit like their efforts at being registered as a party.

Well, we had to be consistent right?

….. I wasn’t confident of getting them delivered by the deadline.

And I Just have to point out how the Pirates are relatively late in joining the party. A bit like their efforts at being registered as a party.

Are you sure that was not Derryn Hinch?

Well it’s not Alan Jones, who, as a parrot, would be a bit piratey.

Did Glen pick a venue?

Sorry neanderthaisis, I looked around for any pirate sets, but the classic 80s pirate Lego doesn’t seem to exist any more.
There were some Pirates of the Caribbean Lego sets, and some second hand pirate pieces on eBay, but I wasn’t confident of getting them delivered by the deadline.
The big box of basic blocks has a pirate on it, we can always make that.
I’ve never been a big fan of overly specialised Lego anyway, it limits what you can do, though I did pick the police set because it had a motorbike in it that would be hard to make out of standard blocks.

Johnboy – Can you update the spelling of my name?
Correct spelling is Glen Takkenberg

I also forgot to mention that I will be running for Ginninderra, and depending on the willingness of the venue to host us, either the Wig and Pen or Phoenix is my choice of venue.

Are you sure that was not Derryn Hinch?

Am I the only one disappointed that the Pirate Party did not bring pirate lego?

I think Pirates are an important part of the Canberran cultural scene and should not be excluded.

It has got a pirate on the box. and we do have some pirate lego in the mix.

Bellelis Australia - 54 minutes ago
Phillipa Leggo thank you. Can't wait to see you in the shop to show you around 😊 View
May Mac - 16 hours ago
The only reason we switched to landfill nappies was the struggle to keep line dried reusables from stinking of woodsmoke in w... View
Phillipa Leggo - 18 hours ago
Well done Olga Imbriano - lovely article👏👏👏 View
News 3

@The_RiotACT @The_RiotACT
A faster rail connection between the two capitals is long overdue. NSW needs to go all the way in its go-it-alone regional rail plans https://t.co/A0eXTCwFE7 (38 minutes ago)