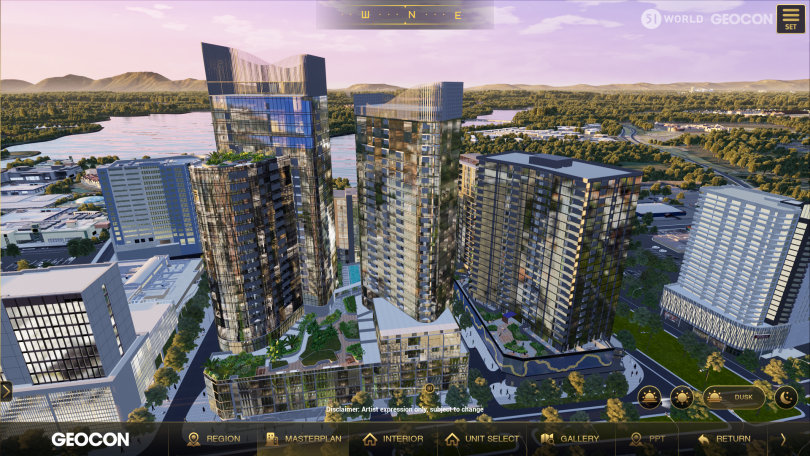 Thanks to Geocon and 51WORLD’s virtual Canberra, users can check out the city’s transport links, walk through apartments and view major amenities. Image: Geocon.

Have you ever tried to show friends or family how great our city is on a map? Without the magnificent views or any sense of the bush in the capital, a street map does not do Canberra justice. The layout of the city, its mountains, rivers and lakes are lost in a 2D layout scored by roads.

So how can you show people Canberra’s superb geographic landmarks, parks and bike paths – or even your favourite local shops and restaurants – without driving around the entire city?

Build a virtual city, of course.

Global technology company 51WORLD has brought Canberra to life by building an immersive and interactive 3D model of the city.

500 staff worked side by side for a month, gathering data and images from multiple sources to create a fly around version of the national capital, with a zoom-in focus on the key neighbourhoods of Kingston, Canberra City, Woden Valley, Tuggeranong, Belconnen and Gungahlin.

Commissioned by construction company Geocon to complement its display suites and help purchasers get a walk-though experience, as well as viewing their new developments, users can zoom in on points such as parks, transport links and even places to find good coffee.

“While Geocon continues to build Canberra physically, 51WORLD has built the city digitally and virtually,” he says. “Our interactive model allows agents to showcase off-the-plan developments, layouts and neighbourhoods, all in one beautiful interface.”

51WORLD has included a level of detail that would make users of The Sims video game weep. You can zoom into an apartment, walk down a hallway to each room, look out the window to the city skyline and even turn on the TV.

“These digital models offer potential buyers views from the developments at various times of day to get a real feel for what it would be like to be in the kitchen in the morning, or on the balcony in the afternoon, as well as providing a great visual in terms of amenities,” says Michael. 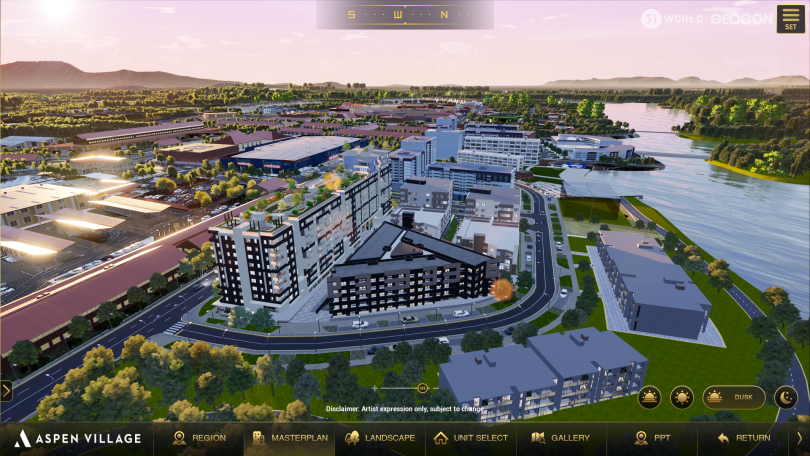 “It allows people to explore their neighbourhood and bring a project to life. It’s more tangible for the client and engages buyers at a level like no other.”

Geocon project marketing director Moonmoon Sahu says building the virtual city was a significant investment for the company, but it has proved popular with clients.

“The digital map really helps buyers to see what each project will look like, what is in the neighbourhood and get a sense of their future lifestyle, giving buyers added confidence,” he says.

“With a 360-degree view, they can truly immerse themselves, walk around and see the spaces of their future home or investment.”

To experience 51WORLD’s virtual models, drop into Geocon’s Belconnen Display Sales Suite or its City Sales Centre and ask for a tour.

Alicia Gartshore - 3 hours ago
Thanks for the memories Your generosity, the wonderful Coffee, customer Service, Good luck with your next Chapter. We’re go... View
News 1

TheSilver - 5 hours ago
Couple of short points as I don't have much time today: Science publications are currently going through a replication crisis... View
phydeaux - 8 hours ago
Buy the way TheSilver, I nearly forgot to mention this with regard to your supposed other scenario https://pubmed.ncbi.nlm.ni... View
phydeaux - 8 hours ago
A few points if I may, starting with your first post in this sub-thread where you start: ".... is literally no good evidence... View
News 5

Noel Benjamin - 5 hours ago
A policy resent for the education sector has been required since the Howard government when education was commodified. The ed... View
News 3

Capital Retro - 8 hours ago
Will it be named after Sam Stosur? View
Community 46

Zoe Lewer - 8 hours ago
Bob Foster yep. Us humans sure have made an impact. We are the problem. You are right. The day the people who were invaded ch... View
Joy Gosden - 8 hours ago
Yes. What were they thinking planting them in our suburbs. They drop limbs attract pests and stop grass growing around them.... View
Bob Foster - 8 hours ago
Another deluded hypocrite post Zoe Lewer 😂 I'm betting you live in a man made structure....made with either cut down trees... View
News 240

Peter Dark - 20 hours ago
Tim Gavel, you value sport, so why are you writing anything positive or forgiving about someone who has shown time after time... View
show more show less
*Results are based on activity within last 7 days

@the_riotact @The_RiotACT
#Throsby School takes its place as the 90th public #school in the ACT, and is part of the ACT Government's plan to keep up with growth in #Gungahlin https://t.co/wsBRZ1EHRx (1 hour ago)

@the_riotact @The_RiotACT
The relationship between Goulburn Mulwaree Council and Wakefield Park Raceway is at a crucial juncture - but could these rocky relations mean things are falling into place for Canberra's #motorsport community? https://t.co/6OF4MAk2qZ (3 hours ago)