Go behind the seams with the fashions from The Dressmaker 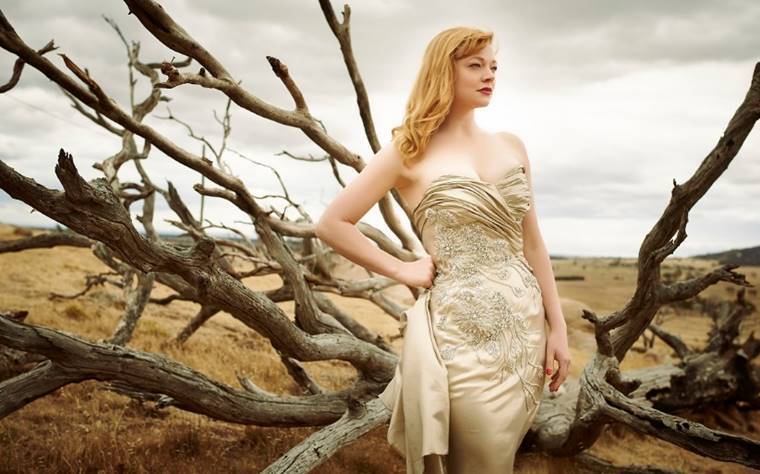 The hit Australian film The Dressmaker had many stars but perhaps the biggest were the beautiful costumes the actors wore to transform their characters.

The original haute couture costumes and vintage fashion designed by Marion Boyce for a cast boasting the like of Kate Winslet, Liam Hemsworth, Hugo Weaving, Sarah Snook, Judy Davis, Rebecca Gibney, as well as special guests James Mackay and Sacha Horler, are being unveiled for the first time and celebrated in a new exhibition at the National Film and Sound Archive from 18 April to 18 August.

At a special media preview on Wednesday (17 April), Mackay and Horler, along with producer Sue Maslin and author Rosalie Ham, talked about the creative process that literally left them in stitches in what all agreed was a memorable shoot with a great director, Jocelyn Moorhouse.

Moorehouse, whose challenges with her autistic children and her 18-year hiatus from film-making have been documented recently, told Horler that The Dressmaker was about a rebirth for her, ‘because it was a rebirth about clothes and women and revenge’.

Horler, who plays Una Pleasance, remembers Moorhouse telling her that in the scene when she got off the train with her sewing machine it should be like a Western showdown, Singers at 20 paces.

It is also about transformation and changing who you are, and of course, the costumes, which have been donated to the NFSA for preservation, are integral to that.

Mackay (William Beaumont) said the transformative aspect of the fashion in the film for every single character was cleverly written.

“Everyone is on a journey and it’s all there in the clothes. I hadn’t worked anywhere where the spirit in the costumes themselves contributed so completely to the film itself.”

Horler recalled how one character says ‘A dress can’t change anything’, to which Winslet’s character retorts, ‘Watch and learn Gert, watch and learn.’

She paid tribute to the costumes, saying ‘in terms of acting three-quarters of your job is done for you’.

The contradiction of such high fashion in the outback setting of the ’50s created great comedic cinema, Horler said, as Winslet’s character brings the style of the rest of the world to town. 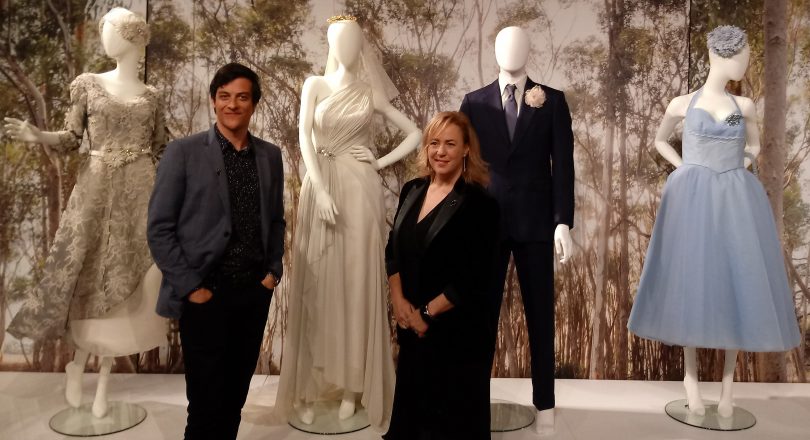 It was a period when the world was recovering from postwar austerity and a range of new designers were rediscovering colour and luxury.

Producer Maslin said the thing that was so distinct about couture design in the early ’50s – as well as the colours, curves, amount of fabric used and beautiful textiles – was that it required a full ensemble, including corsetry and accessories.

She said all the female actors had to wear handmade corsets, which required a fair bit of assistance to get into.

“Of course we don’t have those kinds of styles these days,” Maslin said.

“It was a delight to be able to work with Marion to be able to put together those ensembles to create that look, and put it in completely the wrong place.”

Boyce is internationally-renowned for her designs and has been nominated for an Emmy Award and won AACTA Awards for The Dressmaker and Miss Fisher’s Murder Mysteries.

She also curated and designed this exhibition, which takes visitors behind the seams into the designer’s workshop to discover the level of detail and artistry behind each garment.

Maslin said Winslet was perfectly cast for the lead role, despite only ever having sewed the name tags on to her children’s clothes.

“She needed to be a femme fatale, a strong gutsy woman, and she also needed to have the vulnerability, and the curves – and Kate has all of those in spades,” she said.

For the sewing, she trained with a Singer specialist, but she also had to have the couture attitude, about which Moorhouse learned when researching with a New York couture designer: “What you have to understand is that couture is a weapon, great couture design is a weapon in the arsenal of a woman’s wardrobe.”

The Dressmaker Costume Exhibition runs from 18 April to 18 August 2019, 10 am-4 pm daily at the National Film and Sound Archive of Australia in Canberra. A program of special screenings and talks will complement the exhibition for the duration of the season. Tickets are available: NFSA.gov.au/thedressmaker.

Kathy Gill we should go to this!

Beautifully displayed. Have to watch the movie again now 😊