Working together, enriching lives
13 May 2021

15 May 2021 | Michael Weaver
Start the conversation 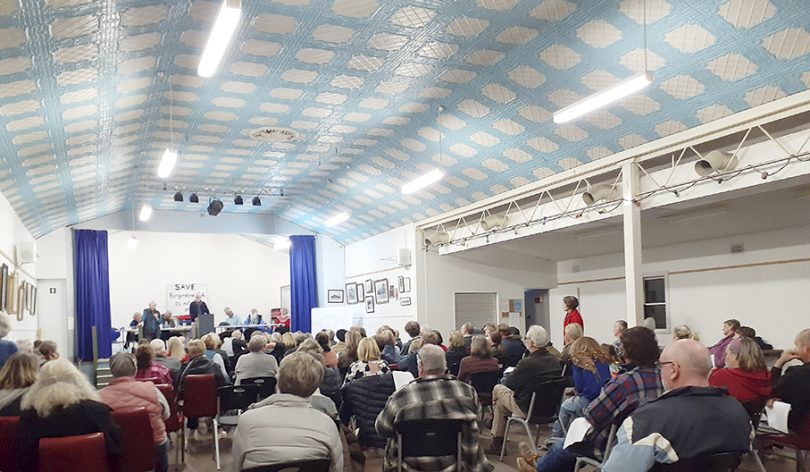 Bungendore residents at a community meeting on 28 April discuss the location of the town’s high school. Photo: Supplied.

As workers from Queanbeyan-Palerang Regional Council (QPRC) moved the goalposts on Mick Sherd Oval further to the west this week in preparation for building the Bungendore High School, debate continues to rage within the community over the proposed site.

While opponents of the site from the Bungendore Park Action Group say the goalposts are literally shifting on the site, proponents say there is overwhelming support for the town’s much-needed high school on what is known as the Majara and Gibraltar Street precinct adjacent to the Bungendore Park.

On 28 April, more than 100 residents from the action group held a community meeting that resolved the proposal to build the high school has been “rushed, deeply flawed and damaging to Bungendore’s heritage and amenity”.

However, during a second meeting this week, organised by the NSW Department of Education, families and residents of Bungendore overwhelmingly supported the high school, which will eventually have more than 400 children in classrooms for term one in 2023.

During the first meeting, the Bungendore Park Action Group again raised its concerns over the proposal. They have continued to label the chosen site a “done deal” since the Member for Monaro, John Barilaro, announced it in August last year. 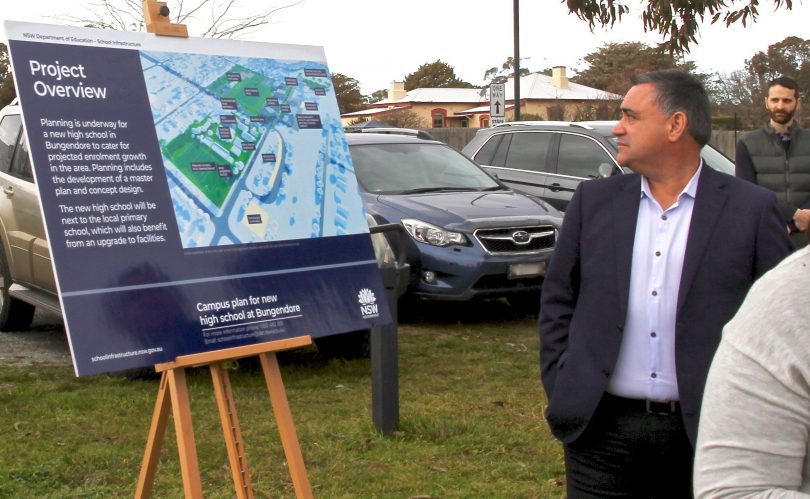 Member for Monaro John Barilaro at the site of the Bungendore High School in August last year. Photo: Michael Weaver.

Bungendore Park Action Group spokesperson Judith Turley said while the group is not opposed to the high school, they condemned the lack of transparency from the NSW Department of Education and QPRC throughout the planning process.

“The selection of this site and the planned high school development has been hastily put together, clouded in secrecy and half-truths, and subject to change with little apparent awareness of the local area, its topography, history and needs,” Ms Turley said.

In the days following the first meeting, the group staged a demonstration outside the Council chambers to further express its disappointment over the proposal, citing issues with traffic congestion due to the closure of Majara Street and the demolition of community assets such as the town’s 30-year-old swimming pool and other facilities.

A QPRC spokesperson said while the sports field at Mick Sherd Oval has been slightly realigned and lighting adjusted closer to the new change rooms, the field will still be used for winter sports and will continue to be available for sports that choose to train and play there out of school hours.

“While the eastern edge of Bungendore Park is proposed to be utilised by NSW Education for the new high school, Mick Sherd Oval will remain in place, as will the expanded change rooms, car park, public toilets, playground, Bungendore War Memorial and nearby tennis courts,” the spokesperson said.

A second meeting, organised by the Education Department on Tuesday (11 May), also attracted large sections of the Bungendore community where many families in the town expressed their support for the much-needed high school.

An Education Department spokesperson said it would continue to engage with the community as the high school evolves.

Bungendore Park will be subdivided and a small portion will be merged into the new high school for Bungendore’s students.

“Bungendore Park will continue to be available for community use, and the Department’s proposal also includes the construction of two new basketball courts within Bungendore Park and a new high school hall that will complement the existing facilities on Bungendore Park. This will be shared between the community and the school students,” the spokesperson said.

Member for Monaro John Barilaro said he had received lots of positive feedback from the local community following this week’s community meeting.

“This is a project that has been talked about for years and the majority of the community is excited that we’re getting on with delivering this commitment,” Mr Barilaro said.

“I’ve spoken to parents and even kids who will be attending this high school and they can’t wait for their new school to open. This high school will be a game-changer for Bungendore and surrounds and will benefit generations to come.”