The gilding draws your gaze from across the room: Adam and Eve are in the garden of Eden at midnight, and St Lucy and St Augustine shine out from the walls of the Australian Centre for Christianity and Culture in Barton.

And so does Uluru.

Michael Galovic is Australia’s most accomplished artist in the eastern icon tradition. The Serbian-born painter reaches deep into the traditions of the 14th century Russian Novgorod school, as well as Renaissance and mediaeval work from Florence and Siena, using gilding and incised gesso to create luminous sacred images in a process known as icon ‘writing’.

So why do the images in this beautiful exhibition include Uluru?

Michael smiles. It’s become something of an obsession for him – a challenge to place the sacred rock of this ancient continent in the same context as the rocks and mountains of sacred scripture.

“I became a little obsessed with boulders, rocky landscapes and monasteries in difficult and inaccessible places,” he says. “They’re represented as sentinels of celestial power – in the gospels we hear about moving mountains.”

Michael has been working on the image of Uluru for the past 20 years, imposing on himself just one rule: to never repeat the image. Every representation of Uluru must stand on its own, while sitting within the icon painting tradition.

“I believe different civilisations, past and present, have points of connection, and I had in mind the sacred and profound significance Uluru has for local people when I began this work,” he says.

So the rock shimmers against a patterned gold background or stands on the traditional red background, a symbol of the divine, of martyrdom and resurrection. When the first Uluru icon was completed, the artist says, “I smiled. I was taken aback by the power of the painting.”

Galovic acknowledges his artwork has been shaped by decades of living in Australia. He arrived in the early 1990s, after being steeped in the rich traditions of the Orthodox churches after a rigorous education at the Belgrade Academy of Applied Arts. His mother had been an art restorer, and his stepfather a restorer and portrait painter who worked on frescoes and paintings with rabbit skin glue and gilding tools.

Initially, icons were little known in Australia and people didn’t understand they could be hung at home as a devotional focus and point of meditation. Pope John Paul II changed that thinking with his emphasis on traditional devotional forms and enquiries began flooding in from schools and churches. 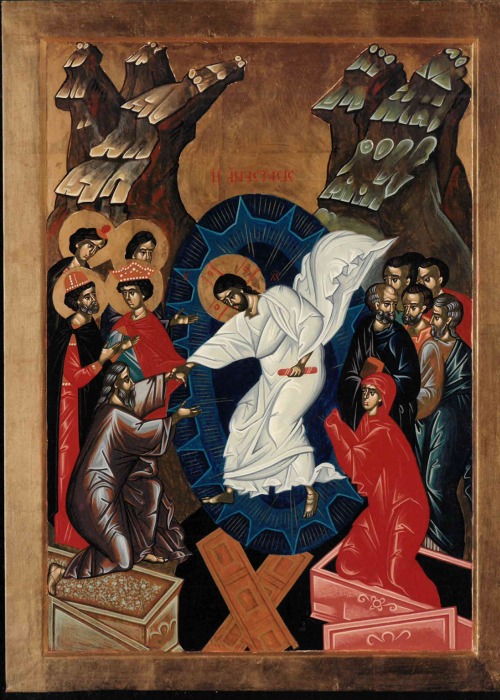 Michael is a four times finalist in the Blake Prize for religious art, and his work has been exhibited internationally. He has produced more than 100 commissions for religious institutions around Australia and, gradually, he says, the country has seeped beneath his skin.

“I could not have done this work if I’d stayed in Europe,” he says. “Australia has rubbed off on me and changed the way I work. Bit by bit, I became part of the tapestry.”

The exhibition at the Australian Centre for Christianity and Culture illustrates Michael’s transition towards a contemporary vision. Centre manager Hazel Francis says it’s an apt destination for the beautiful works because the centre’s focus is on dialogue within the Christian faith and interfaith movements.

“We’re so excited to have these beautiful works here,” she says.

Michael says: “I’ve always been fascinated by the Renaissance, the Gothic. For my own pleasure I try to replicate medieval pieces, or Bartolomeo Montagna’s works from the 15th century.

“When you dedicate your life to this kind of obsession – and I say that with a smile – it’s not hard work.”

Michael Galovic’s Icons and Contemporary Art exhibition is open every day at the Australian Centre for Christianity and Culture in Blackall Street, Barton, between 10.30 am and 3.30 pm until 21 March.